Frostgrave: The Wizards' Conclave is the latest supplement to the best-selling fantasy wargame by Joseph A. McCullough, bringing a host of wargames designers to the frozen ruins of Felstad. Today we hear from Joel Eddy, host of Drive Thru Games and a great fan of Frostgrave who contributed a scenario to the book!

Three years ago, I fell in love with miniature gaming. This is almost entirely due to Frostgrave. About 12 years prior, I fell deep into the tabletop gaming hobby. Mostly I stuck with board games and card games, but I enjoy all manner of games. I'm a bit of scatter brain in that regard. I've always loved games like Heroquest, Descent, Claustrophobia, and the like. And there's always been a hankering to get back into Dungeons & Dragons, which I played while in college and a tiny bit as a youngster. Whenever I wandered into a game store, I'd always been fascinated in miniature gaming, but was only ever exposed to Warhammer. At the time that was way too expensive and time consuming for me to even begin to consider.

Going into Gen Con 2015, I had barely heard of Frostgrave. It had some buzz with some friends of mine, and I was very intrigued by the concept of a miniature agnostic game. I did not spend much time investigating it at the time, but the kernel of a seed had been planted. Fast forward to 2016, and I stumbled across Ash Barker's YouTube channel: Guerrilla Miniature Games. In addition to being one of the many amazing authors in this book, Ash creates an overwhelming stream of amazing video battle reports for just about every miniature game under the sun. He also features gorgeous tables with fantastic looking terrain! I watched his series on Frostgrave and was immediately hooked.

Long story short, a whole new universe was availed to me. I scrambled together some miniatures from a variety of sources, started the process of learning to paint (a process still very much in motion), cobbled together some terrible terrain, played through a couple of ham-fisted games... and was in love. And, unexpectedly, I'd found my Dungeons & Dragons itch… scratched. On the surface Frostgrave is a miniature combat game, but for me, it leans very heavily on the Role Playing and narrative aspects of gaming. Before playing I had read some grumbling about the use of a D20 over a more balanced dice system. I was nervous, but in practice, the sheer inanity that a D20 brings to the game had me in absolute stitches. You might ask Joseph about the time my wizard "healed himself to death" in the face a Major Demon at Gen Con 2018. I guess my wizard was nervous. 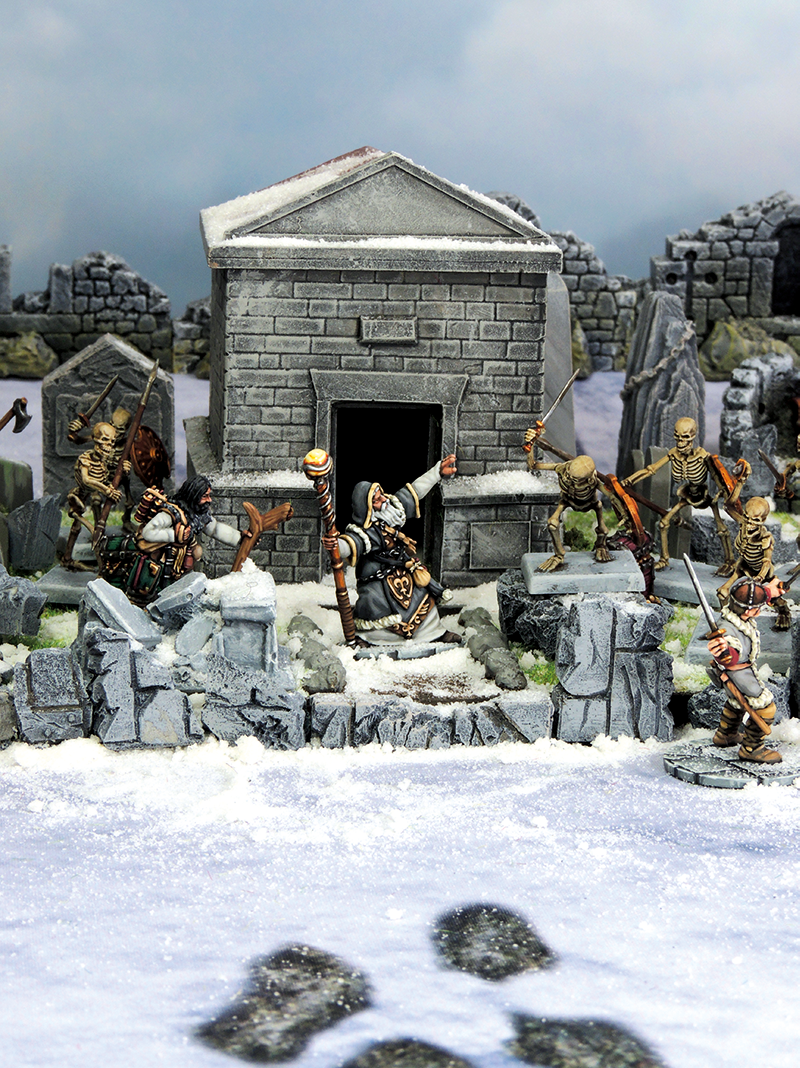 Since getting into Frostgrave, I've dipped my “toe” (my whole body) into various other miniatures games, but Frostgrave was my first.

When Osprey asked if I wanted to contribute to Frostgrave: The Wizards' Conclave, I was beyond overwhelmed. More, I was flabbergasted and then embarrassed when I saw the planned line up of authors and designers. I sat down to piece together what I would want to add to the world. I discovered that I wanted to come up with a narrative side quest of sorts that you could theoretically drop into the middle of any Frostgrave campaign. As I ran through various ideas and play tested various bits, I settled on doing a riff on the Rescue Mission scenario from the game Necromunda. I started with a vision of a mini-campaign and quickly weeded this down to two possible scenarios, the first of which you see in the book. Joseph helped me narrow down to a core concept (and helped prevent me from biting off more than I could chew frankly).

There are two things that I love in a miniatures game. One is quirky asymmetrical rules. The other is, for the lack of a more intelligent term, “board-gamey” mechanics. With Joseph's guidance (and balancing), I think we were able to achieve this.

What's the gist of the scenario? Well here's the introduction from the book:

"Your apprentice has been kidnapped! A low-born wizard stole into your base before dawn and took your most trusted ally. After a frenzied chase, you have managed to catch up and ambush the wretched thieves..."

One player, the Rescuer, starts the game without their Apprentice! The other player, the Captor, divides all their soldier models into groups and secretly selects one of them as the carriers of the kidnapped Apprentice. However, the Captor player no longer does traditional Group Activations on their turn. They must also keep these groups of soldiers within a three-inch coherence over the course of the game. The objective of the Rescuer is to of course find and kill the group carrying their Apprentice, who if rescued will become available on their next Apprentice activation step. The Rescuer also gets to place three treasure tokens, with some restrictions. These will be the only treasure available in the game.

Joseph helped me tweak the rewards of this scenario, as there are multiple granular victory conditions. Experience rewards have been bumped up slightly. But, if the Captor player can get the captured Apprentice off the table without discovery (and keep their wizard alive), they will gain an instant level with the reward being a copy of one of the Rescuer's wizard spells! Narrative wise, the Captor has extracted the knowledge from the captured apprentice, ideally through an extremely painful ritual.

There are more details in the book, but I've had a lot of fun playing through and balancing this with Joseph. If you need something to break up your campaign and kind of personalize the grudge between you and a rival, give this scenario a shot!

Finally, I can't thank Joseph and the folks at Osprey enough for allowing me this opportunity to carve out a small niche in this amazing world they've created. I'll forever be grateful. Thanks to Frostgrave, I've found an amazing multiplicity of universes to explore in my gaming life. This entire process will remain a special moment in my life.

I hope folks can experience some level of that joy when playing through this scenario.

Order your copy of Frostgrave: The Wizards' Conclave today and enjoy new adventures in the Frozen City!