On the blog today, Donald Nijboer, author of German Flak Defences vs Allied Heavy Bombers briefly looks at the role flak played during the second half of World War II. 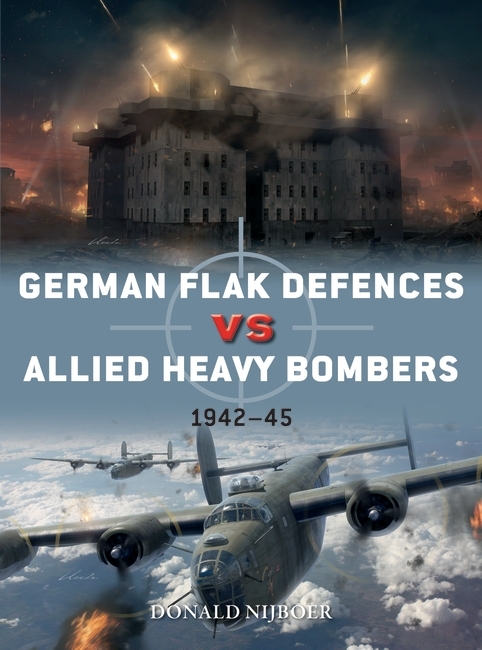 ‘Flak damaged many aircraft and drove the bombers to fly high, but it destroyed few.’ Max Hastings, author of Bomber Command

In myriad publications chronicling the air war between the Allied heavy bomber force (both RAF and USAAF) and the Luftwaffe, the role and effectiveness of Germany’s ground‐based gun defences (heavy, medium and light) has largely been ignored. The vast majority of Anglo‐American histories have focused mainly on the role of the Luftwaffe’s fighters (both during daylight operations and at night), with little or no mention of the immense contribution made by the thousands of flak batteries and searchlights based both in occupied Europe and Germany itself.

As the RAF and USAAC grappled with the technical problems of building and fielding an effective bombing force, the Third Reich was preparing for war on the ground and in the air. By 1935 doctrine was in place, the Luftwaffe being seen as an instrument of attack and defence:

The last sentence is key. Anti‐aircraft defences cannot be looked at in isolation. An effective air defence requires both fighters and flak batteries. It has often been stated that it took 16,000 88mm shells to shoot down an Allied bomber. It was an example of how wasteful anti‐aircraft fire was compared to a fighter attack on a formation of bombers. To say the flak gun was not as efficient at shooting down a bomber compared to a fighter misses the point. This was a false metric, and one that the Germans fell prey to during the war.

It must be remembered that the first job of the anti‐aircraft gun was to make bombers fly higher, thus decreasing the accuracy of their attacks. More ‘hot metal up’ meant less ‘cold, accurate steel coming down’. Its second job was to try and break up incoming formations, or cause them to use evasive manoeuvres. In late March 1945, Gen Carl A. ‘Tooey’ Spaatz, commander of US Strategic Air Forces in Europe, stated that flak was ‘the biggest factor’ affecting bombing accuracy. As a rough calculation, each 5,000ft increase in altitude halved the accuracy of anti‐aircraft fire. However, the greater the bomber’s height, the poorer the accuracy when it came to hitting the target. Bombing errors from 15,000ft were twice as great as from 5,000ft.

For the coming battles, the Allies would pit their best heavy bombers – the Stirling, Halifax, Lancaster, B‐17 and B‐24 – against the Luftwaffe’s formidable ground defences, which consisted of thousands of 88mm, 105mm, 128mm heavy guns and even more light and medium 20mm and 37mm flak guns. The battle would rage both day and night. For aircrew, flak would be a horrifying constant of the brutal strategic bombing campaign, often arriving unannounced and with deadly accuracy. Allied heavy bomber losses due to flak would number in the thousands. Indeed, German flak accounted for close to half of all American aircraft lost in Europe, making it a lethal and deadly adversary.

Preorder your copy of German Flak Defences vs Allied Heavy Bombers to find out more.