Publishing on 12 December, Romance of the Perilous Land: A Roleplaying Game of British Folklore is one of the two launch titles for the new Osprey Roleplaying series. Written by Scott Malthouse, the game sees players take on the roles of valiant knights, mighty barbarians, subtle cunning folk, and more as they roam the land fighting evil, righting wrongs, and creating their own legends. On the blog today we have an introduction to the game from author Scott Malthouse.

Hello and welcome to the first post about Romance of the Perilous Land: A Roleplaying Game of British Folklore. Today I’ll be explaining the setting and what to expect when playing the game.

First off, Romance of the Perilous Land is an exciting roleplaying game that immerses players in a world of danger, monsters and magic. The titular Perilous Land is based on a hazy mythical Britain, a land where Robin Hood stalks the woodlands, Lancelot leads quests against a local coven of hags, and Mordred sits in his tower, plotting the downfall of Arthur Pendragon. While the game isn’t set in Britain, it does include a wealth of creatures and folklore from regions and countries in the British Isles - brownies, fairies, knuckers, revenants, giants and more run rampant through the 11 kingdoms. The book has more than 80 different creatures in its bestiary, some of which are fantasy favourites while others come from more obscure parts of British lore.

The game is set in the Age of Valour, a time when Camelot is forging alliances with other kingdoms in order to battle the powers of darkness: The Black Lance and the Sisters of Le Fay. The Black Lance is led by Mordred, a turncoat knight who believes he is the rightful heir to the throne of Camelot and so wishes to depose Arthur by force. In Norhaut he builds his forces, but his allies are present throughout the Perilous Land as mercenaries, knights, spies and corrupt nobles. While Mordred wishes to take Camelot for himself, the enchantress of the Wytchwood, Morgan Le Fay, leads her Sisters of Le Fay in a war to bring Camelot to its knees. During the previous Age of Doom, a mysterious event caused the dormant malevolent creatures of the Perilous Land to become active once more and run rampant. Seeing the land plunged into shadow, Arthur embarked on The Great Search to find allies, knights, cunning folk and others who would fight these monsters. Morgan Le Fay believes that these magical beings have the right to live in the Perilous Land and sees Arthur as her mortal enemy. Her Sisters of Le Fay join her fight against civilisation, desiring a return to the natural order of things. 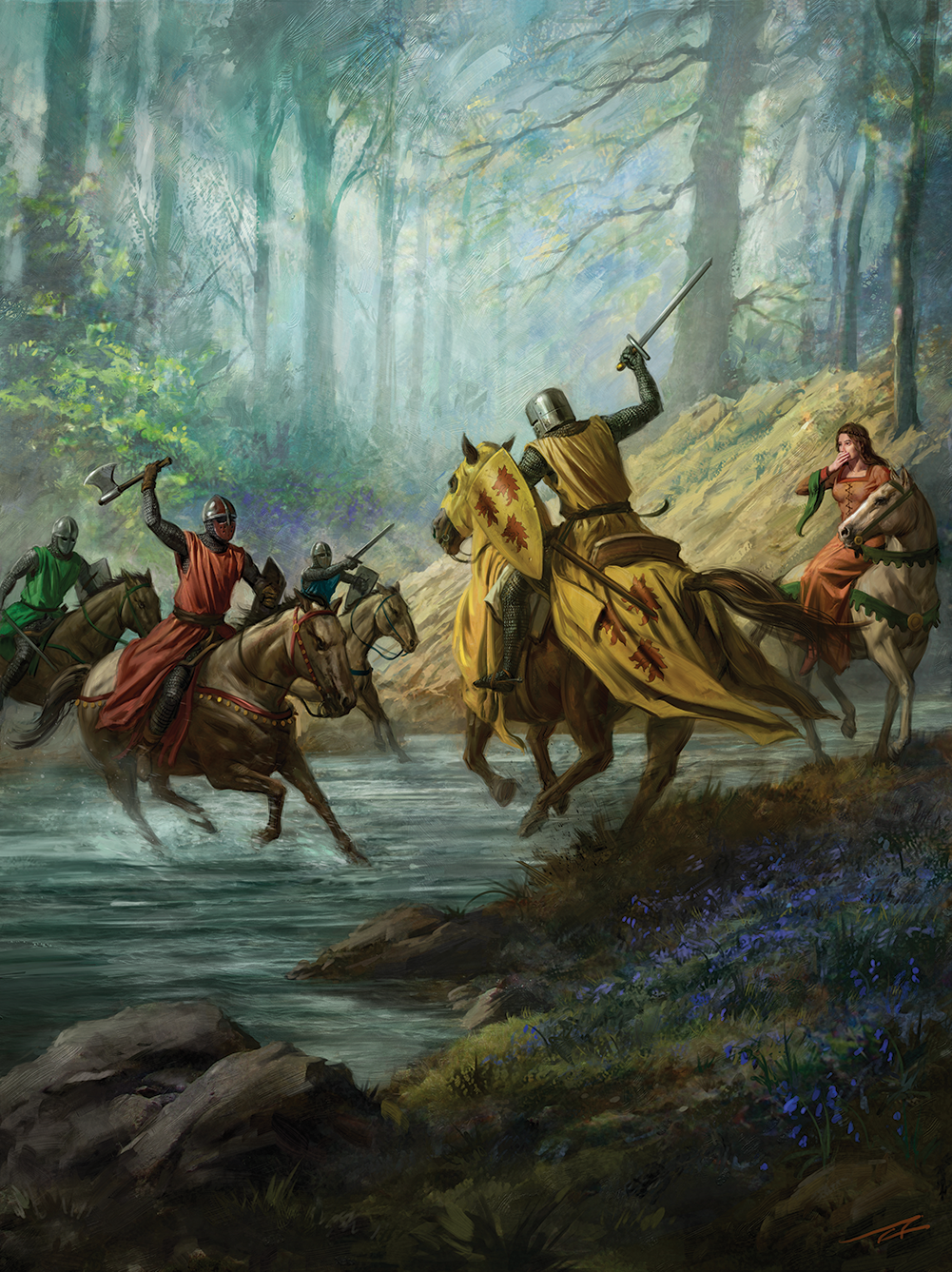 Both the Sisters of Le Fay and The Black Lance are two of a variety of factions in the Perilous Land, some evil, some good and others neutral. Players will have the chance to join one of these factions, such as the valorous Knights of the Round Table, the rugged Iron Hawks, the mystical Fellowship of Enchanters, along with others. Factions offer a new dimension for character roleplay, with each having a series of requirements for joining that faction. For instance, the Order of the Fisher King must always quest for a cure for their ailing monarch - if a member ever stands in the way of retrieving a cure they will be put to death, while the Merry Men of Sherwood must distribute 50% of their treasure to the poorest in society.

If you’ve ever played a roleplaying game before, the rules of Romance of the Perilous Land will be familiar, and newcomers to the hobby will find it easy to pick up and play. In the game some players will each create a character. Perhaps this will be a valiant knight, a magical cunning folk, a survivalist ranger or one of the other classes. Using backgrounds, talents, skills, deities and factions, they will fashion a unique character. One player will take the role of the Game Master (GM), who referees the rules, crafts the world and creates adventures for the player characters to embark on in the Perilous Land.

Characters have several attributes: Might, Reflex, Constitution, Charisma and Mind. Each attribute is assigned a number - the higher the better. When a player wants to do something, like climb a wall, kick down a door or pick a pocket, they have to roll equal to or under the relevant attribute with a twenty-sided die (d20). The GM decides how difficult a task will be, which will reduce the target number needed. Characters can use skills they are proficient in like riding, thievery or history to give themselves a better chance of success.

Of course, players are bound to find themselves in a scuffle on their adventures, whether it’s with a devious brigand on the road or in the watery abode of the finfolk. Combat in Romance of the Perilous Land is designed to be simple, but tactical -  perfect for theatre of the mind play or with miniatures and a battlemat. All enemies have a Hit Die (HD) which determines how challenging they will be in a fight, and with the HD system it’s easy to create your own monsters on the fly using just one number. Players will be using their weapons, talents and class features to best their opponents and emerge victorious. Some will be able to tap into the vein of wyrd in the world in order to cast spells. The most powerful of these casters are cunning folk, who can cast spells to solve problems and harm their enemies. Cunning folk can use spell points to prepare a variety of spells of their class level or lower. They can even take a risk as prepare spells above their level, but there’s a chance things could go wrong.

In the next post I’ll be talking in more depth about creating a character in Romance of the Perilous Land.