Publishing on 12 December, Paleomythic: A Roleplaying Game of Stone and Sorcery is one of the two launch titles for the new Osprey Roleplaying series. Written by Graham Rose, the game transports players to the land of Ancient Mu - a harsh, prehistoric world of biting cold winters, savage predators, and hostile tribes. Today, Graham is on the blog to introduce you all to his upcoming game.

I coined the phrase ‘stone and sorcery’ to capture the idea I had for a genre, which takes some of the principles of sword and sorcery back in time. I wanted to strip away the technology of sword and sorcery (such as it is), whilst maintaining its fantastic and otherworldly experience. My intention was to create a world of primitive wonder, with as much potential for adventure as any fantasy setting.

Paleomythic is the result, and presents a mythical prehistoric world on a continent that never was. This is a land of dangerous megafauna, of mastodons and sabretooths, otherworldly spirits and of primitive ‘beast-men’. The setting gives glimpses and hints of things gone before; of forgotten civilisations and strange, ancient peoples.

To survive in Paleomythic is to learn to gather enough foods to sustain yourself for the journeys ahead, or to face the danger of hunting down a beast, such as a huge aurochs, or even a mammoth. Survival is also about using fire to heat a cave during a freezing night, or finding shelter from a sandstorm in an arid wilderness. To survive in the world of Paleomythic is to compete against wild animals such as ‘tusk cats’ (sabretooths), dire wolves or huge birds of prey called teratorns. 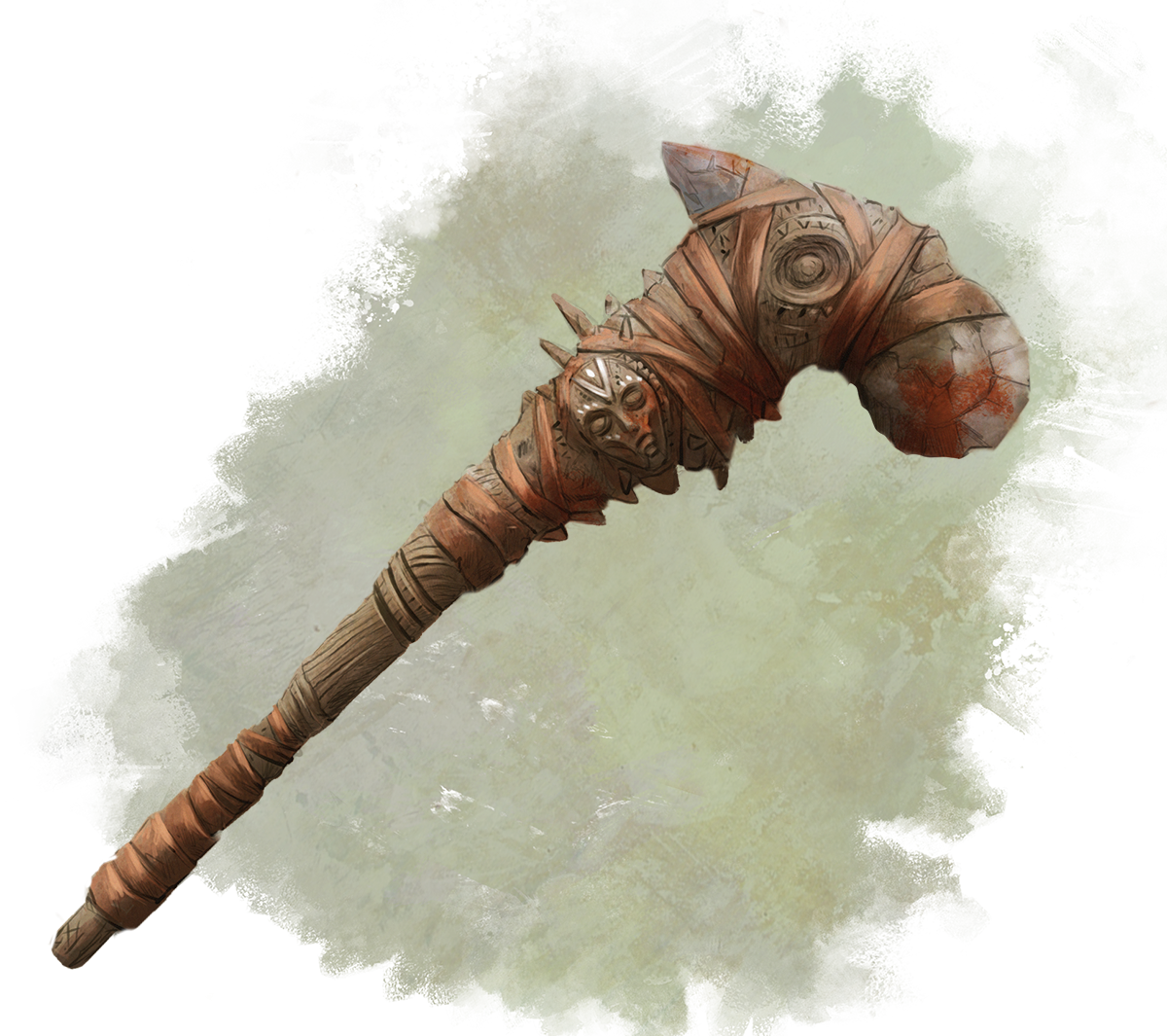 When characters must fight in the world of Paleomythic, the stakes are high. They must enter combat armed with weapons of wood, flint and bone. These can inflict cruel wounds on their opponents, or they could just as easily fall apart in the characters’ hands. Opponents are many and varied, from enemy tribes and feral beasts, to fearsome and strange beast-men (such as the menacing ghouls of the deep caves, or the savage boar brothers and tail sisters).

Ancient Mu is a continent almost absent of uniformity; a place of many types of people, with their own customs, traditions and societies. There are tribes that worships gods, or that venerate their ancestors. Some celebrate death, yet others mark the birth of a child, or the coming of a season. The land also has many mysterious places, spoken of by travellers or hinted at in ancient stories. Some speak of the City That Was, a forgotten place of dark stone buildings. Yet others whisper of the Barrow Land, where the spirits of the dead roam.

Despite having some established features, the setting of Paleomythic is very much reliant on a set of tools rather than being specific and defined. The exotic locations and the areas inhabited by the tribes of beast men are implied rather than precisely positioned. Many tribes and settlements are yet to be established - the tools are there for the GM to create and place these in a land of their own creation.

Paleomythic is a setting that is possibly familiar to some; in that it is in many ways similar to other fantasy genres. Players experienced with fantasy RPGs will have no trouble adapting to the game. Their characters will have adventures, search for treasure, combat monsters and even dabble in a little sorcery. Common to the theme of sword and sorcery is the idea that adventures are personal struggles against both mundane and exotic dangers. Paleomythic is designed with this in mind, encouraging tales in which characters are striving to best savage enemies, overcome hardships and further their tribes interests.

Paleomythic is also perhaps unique. Common themes occurring in fantasy games are changed or even absent. Tools and weapons are made of materials such as wood, flint and bone rather than metal. A character might wear a helm made from a skull, armour made from bones, and wield an obsidian tipped spear. For Paleomythic characters, treasure might be materials useful for making tools, or for the lucky, a handful of precious stones and gem fragments useful for trade.

Different too are the settlements and societies; there are no sprawling cities or large towns in Ancient Mu, there are no shops and taverns for characters to haunt. Instead, there are tribes dwelling in hide tents, caves or earth mounds. There are settlements with houses made of mud bricks or stone, perhaps scavenged from ancient ruins. Nomad encampments of bright tents can be encountered, where characters can barter for exotic goods.

Belief in spirits, deities and the supernatural is also prevalent throughout Ancient Mu. This is a land of scorpion, toad and insect gods, of mouthless deities that rule spirits, and of goddesses that run wild in forests and ancient woods. Some beliefs have been corrupted and skewed to evil ways, enforced by cruel priests that subjugate their followers. Other dark things are whispered, about the evil sorceries wielded by the followers of old, almost forgotten deities.

The wilds of Ancient Mu are where the beasts have dominion. Many beasts are recognisable; there are plains filled with horses, goats that stumble on mountain sides, and deer that roam the forests. Others beasts may be strange and frightening to characters; such as the horse-rhinos that forage the scrubland of Mu, or huge spike tails, that can maim and kill with a swing of their tail.

The Paleomythic rulebook is completed with an adventure to get players used to the setting. This follows the tradition of many fantasy role playing games, occurring in an underground cave setting filled with danger. Hopefully, it’ll prove to be a simple, fun and exciting introduction to the world of Paleomythic.

Eager to start your adventures in Ancient Mu? Preorder your copy of Paleomythic: A Roleplaying Game of Stone and Sorcery today!