Charlie Company's Journey Home, by Andrew Wiest, focuses on one company's experience of war and its eventual homecoming. Today's blog post, an extract from the book, looks at some of the interactions the men had with their wives. 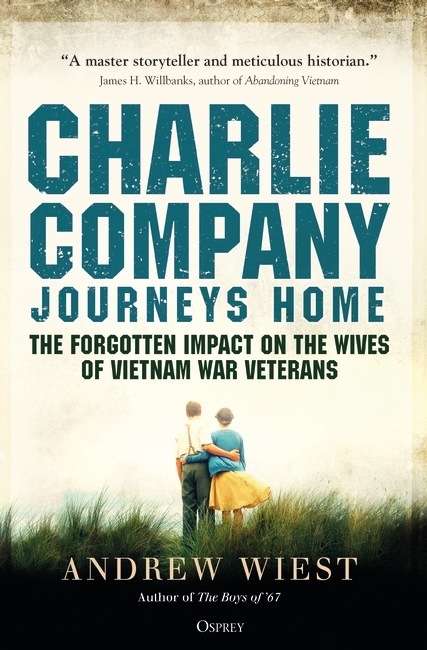 "Laughter, grousing about army chickenshit, requests for cookies, queries about health and friends – these still formed the greatest part of the soldiers’ collective letters home. But as the war darkened, and death became a given, letters shifted toward loss and a deep longing for normalcy. Drafted out of the Cleveland area, Ray Layman had married his wife June after receiving his draft notice. In April he wrote: Ron Schworer was half way across the river when shots rang out of nowhere and bullets hit the water. Schworer went down and never came back up. So come to find out it was [one of our own] choppers firing on us. He was out of his area of operation. He caught hell for that. But that still doesn’t bring Schworer back to us. John Sclimenti, usually the jokester of the unit, wrote home in July:

One of my pals got killed on the 11th. He was from Cleveland and his name is Phil Ferro. Nice guy. His mom wrote to me just before he got killed and sent cookies to us guys. Boy oh boy, what a weird feeling... I know God is with me, and I am glad about that. Just keep up the praying... I just want to get home soon. For the married men in the unit, their wives became both sounding board and lifeline to a world of normalcy that was slipping away. Like Chaplain Windmiller had already discovered, as the war darkened each man had to ask himself how much should he share about his new and violent life? How much could he share? Could his wife really understand what he was doing, what he was feeling? Would it all change her opinion of him? Could she take it? How each couple dealt with the hard hand of war varied. Some of the guys tried to shield their wives from the worst, hoping that they would somehow return from war unscathed. Others wanted to share every detail of their brushes with death. And the wives varied in their receptiveness to such news. Some, like Esther Windmiller, wanted to be a complete part of their husband’s life, which included taking the very bad with the good. For others such letters and information threatened to push them into a haze of isolation and despair. Hailing from North Hollywood, 1st Platoon member Gene Harvey loved to write; he even hoped to take up the pen as a profession one day. The details of his letters to his wife Deana during March and April were especially vivid:

Everyone was quietly awakened. In the pitch black dark we all fired at the noise when it was in front of us. Our massive firepower cut two VC in two and demolished their sampan. Needless to say nobody volunteered to swim out to the sinking sampan and haul it to shore.

So far we have only lost one man in the company. He tripped a grenade booby trap. He’s not dead, but was wounded pretty badly. They flew him away somewhere and that is the last we heard of him. A few guys have narrowly missed VC bullets. Actually it hasn’t been bad. They say things start to happen when we get down to the delta.

I thought of not telling you, and I discussed with my friends. I finally decided not to keep anything from you, because after all you are my wife. On the other hand this sort of thing doesn’t happen very often, so don’t worry your pretty little head about anything.

Deana wrote back that she appreciated his forthrightness and honesty, but that the details of the dangers he faced were just too much. She feared greatly for his life, and knowing the full depth of the risks he constantly faced only made it worse for her. She loved him deeply, and wanted to be there for him, but reading those letters left her feeling helpless and alone. At her request, Gene toned down the letters. The Harveys’ experience in how best to deal with the realities of combat in letters stands as a prime example. Each couple had to negotiate its own agreement when it came to the husband’s sharing of the battlefield reality of his war.

The stories of the Charlie Company wives are so different, set apart by elements as diverse as race, class, geography, duration of marriage, living condition, and number of children. While the guys were a unit, brought together in training and forged in combat, the wives remained individual – physically separate from the other Charlie Company wives and divided by a gulf of experience from their own families and friends. Those differences, and each marriage’s distinctly individual nature, has necessitated a written structure that deals with each person and relationship on its own, building narrative walls between the female protagonists of this collective story. Within that structure, though, some commonalities have already become clear. Vietnam was a difficult time, one of separation and longing. One of watching children pass milestones

without a father. One of a retrograde movement out of adulthood and back into some hybrid form of childhood, being married but living at home in your old room. But Vietnam was also a liberating time. Goals were set and careers were founded, in part to ready for the return of a “normal” life after the war. Wives took responsibility for finances, cars, education, and the children. Sometimes it was hidden behind all of the loneliness and longing, but the new responsibility was exciting. But the greatest commonality of all for the Charlie Company wives was fear – usually unspoken and sometimes deeply hidden, but fear nonetheless.

The wives of Charlie Company knew full well that their husbands might return from war maimed, changed, or not at all. And they knew that they were powerless to change that fact. For all of their newfound agency in marriage and life, they were helpless in the face of war. They could support their man with kind words, and perhaps a fresh batch of cookies from time to time, but the written word is no match for fear; no match for depression; no match for a bullet. Human beings thrive on control. We rose to the top of the species ladder by seeking to control our surroundings, and control has defined us ever since. But in war, the Charlie Company wives found themselves totally lacking in any form of control. Events controlled them; happenstance controlled them. Try as they might, they could not fundamentally impact their husbands’ lives or fortunes in any way. They could only sit back and receive news, and have the war impact them. It was a helpless feeling, and the source of endless anxiety. An anxiety that nobody else can fully imagine."