In David Campbell's newest Combat book, US Soldier vs Afrikakorps Soldier, he explores the opposing sides of the Tunisian campaign during World War II. Today on the blog, David examines the context behind these two forces: the new-to-combat US soldiers and the divided Afrikakorps.

The US Army was powerfully well armoured and equipped, but fresh to war, and it showed. Organization suffered from a surfeit of peacetime theories and training was insufficient and ill-applied. Despite such failings the US GIs and their commanders learned very quickly, adapting to German tactics and the realities of mechanized warfare. The Axis forces in North Africa were seasoned by years of fighting against increasingly powerful British and Commonwealth forces, and were led by one of the Reich's most capable generals. The German doctrine of mechanized warfare had proved itself time and again, but ever-growing logistical and supply problems were blunting its effectiveness.

The Tunisian campaign has long been most famous for the series of severe defeats that the German Army inflicted on the US Army’s II Corps, most famously at the battle of the Kasserine Pass. Scenes of American soldiers abandoning their weapons and fleeing in confusion and panic ahead of the veteran combined-arms kampfgruppen of Rommel’s Deutsches Afrikakorps (DAK) have some basis in fact, but the immediate reality as well as the larger operational picture were more nuanced, and much less favourable to the Germans than they might have appeared at first glance. 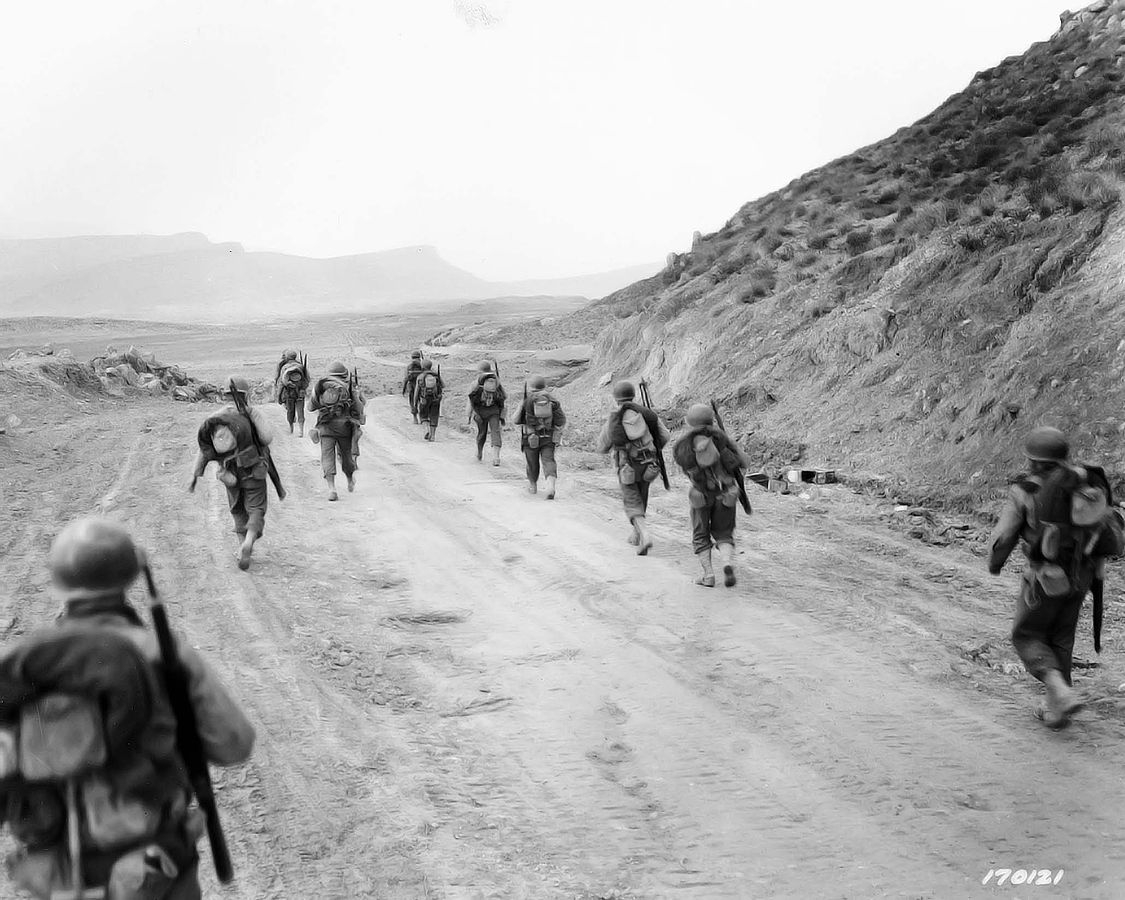 The American defeats in February 1943, particularly at Sidi Bou Zid and Kasserine, had many fathers.Though Allied strategy was clear enough, this was the first time that American, British and Free French forces were employed together on an operational level, a fact that resulted in confused chains of supply and command, hampering effective decision-making and confusing the Allied response to the DAK’s aggressive thrusts into their lines in February. For the Americans in particular this situation was sorely exacerbated by the deployment of Major General Lloyd R. Fredendall’s II Corps; tasked with defending the Eastern Dorsal mountains, the 1st Armored Division, 34th Infantry and 1st Infantry Division (with the support of some Free French forces) were broken up into penny-packets and scattered all along the length of the line. Not only did this dissipate the organisational and fighting power of the divisions, it led to situations where units were isolated from familiar systems of command and control and were deployed too widely to allow for effective mutual support in the event of an attack. Added to this state of affairs was the fact that the vast majority of US troops were new to combat, as was the Army itself – the force that was operating in Tunisia was vastly different from its modest and hide-bound pre-war incarnation, having been raised, organised and trained in little more than a year. As a result Rommel’s 14 February surprise attack with four Kampfgruppen from the Afrikakorps and 10. Panzer-Division resulted in a bloody drubbing for American infantry and armor.

Despite the significant reverses suffered by II Corps during the Kasserine battles, one short month later the 1st Armored Division’s assault on Maknassy and the 1st infantry Division’s defence of El Guettar would demonstrate a level of competence and aggression that was worlds away from what had gone before.The shock of such stark defeats forced an urgent reorganisation of US forces in Tunisia, with revisions to the command structure as well as a return to the division’s central role in the control and deployment of its organic units. Such changes, achieved so rapidly, were not simply down to the replacement of a poor commander (Fredendall) with a better one (Patton), nor the reconstitution of dissipated units into their parent formations, vitally important that both of these factors were. Although they were eventually overwhelmed, individual units of the 1st and 34th Infantry Divisions had fought well at both Sidi Bou Zid and Kasserine, often holding their own against veteran DAK troops in extremely trying circumstances. At a fundamental level, despite its manifest inexperience the US Army was sound: its officer corps was by-en-large competent, its men well-trained and very well-armed, armor and especially artillery were plentiful and of high quality, and all arms were operating within a doctrine that, despite its flaws, was realistic and effective. Reconstituting the 1st and 34th Infantry Divisions allowed those basic truths to come through. 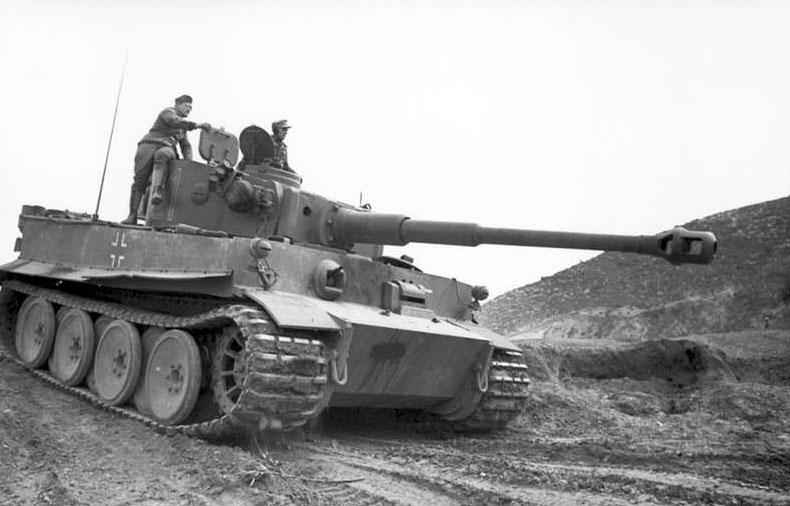 A German Tiger tank on the move, in Tunisia January 1943
Source: Bundesarchiv

The problems that beset the Americans are reasonably well-known, but the extent to which the Germans were hampered by logistical and command failings is perhaps less appreciated. For the Axis powers the strategic situation at the beginning of 1943 was serious, with allied armies advancing on two concentric fronts, but the Afrika Korps and its Italian allies, freshly reinforced by significant units from Europe including the battle-ready 10. Panzer-Division and the Tigers of schwere Panzer-Abteilung 501, was still a potent enemy. Despite such strength, there was no real agreement on strategic objectives between Generaloberst Hans-Jürgen von Arnim (5. Panzerarmee in the north near Tunis) and Rommel (Deutsch-Italienische Panzerarmee in the south holding the Mareth Line). Generalfeldmarschall Albert Kesselring, in charge of the southern theatre of operations, more often played the role of referee between the his two headstrong subordinates, a job that was made still more difficult because he also had to kow-tow to the Comando Supremo (the Italian military High Command in Rome), which had the ultimate say on operational matters.

German operations were further hampered by one overriding logistical reality – men and materiel were in short supply, and the increasingly tight Allied stranglehold on the sea lanes of the Mediterranean meant that this was a situation that would get worse, not better. Arnim and Rommel had enough men, fuel and panzers to hold their respective fronts and to engage in limited offensive action, but not to launch the sort of attack that would have a reasonable chance of shearing through the Allied lines and turning the tables in the Tunisian campaign. Despite this uncomfortable reality, Rommel and Arnim continued to pull in different directions, Arnim favouring a defensive posture with Rommel, ever-aggressive and in search of opportunities to exploit, opting for offensive action. Kesselring ultimately agreed to an attack; the widely dispersed infantry and armor of the US II Corps, who had not seemed particularly effective during the encounters around Sened at the beginning of February and who currently sat astride the road that led to the main Allied supply dump at Tébessa, were assumed to be the soft underbelly of the Allied line.

It was against this strategic backdrop that the German offensive on 14 February was launched. The larger objectives of the attack were far from clear, beset by muddy strategic thinking and hopeful assumption.The short campaign would demonstrate that, despite the impressive tactical abilities of their combined-arms kampfgruppen, the Germans didn’t have the operational muscle to exploit their initial victories or properly adapt to the Allied response. Rommel’s hungry optimism would not be enough to carry the day.

To read more, pre-order your copy of David Campbell's US Soldier vs Afrikakorps Soldier.