Yesterday, 8 August 2018, marked the centenary of the Battle of Amiens and the beginning of the Hundred Days Offensive. This turning point for the Allies is the focus of November 1918 by Gordon Brook-Shepherd, which is republished by Bloomsbury Reader today. In today's blog post, we feature some of Gordon's words on his book. Gordon sadly passed away in 2004 aged 85.

To say that this particular narrative of how the Great War ended has never been written before may seem a bold claim to make, in view of the many thousands of books which have been published in all languages since that terrible conflict ended. But my English and American publishers came forward with a joint concept to fill what they held to be a gap still existing in the histories of the First World War. This was to tell the story of the closing phase of that war on all four of its principal battlefields (i.e. Italy, the Balkans and Palestine, as well as the dominant Western Front); to show how those campaigns were interrelated in the approaching victory of one side and the approaching defeat of the other; and finally, to depict how the position on those battlefields affected the peacemaking process fashioned by President Wilson, and when and where it contributed to the final collapse of the three empires (the Hohenzollern, the Hapsburg and the Ottoman) which fell during those last months of 1918. In other words, what was required was a panorama of the whole closing scene, which would link, in one volume, all the main military aspects with the diplomatic and dynastic ones; would show how crowns were lost viii with battles; and how the cross-currents of war itself threatened, almost to the end, the incoming tide of peace. As often as practicable, the story was to be told in the language of the actors themselves, great and small, so that the reader would move from Supreme Headquarters to the frontline trenches, and from pavements to palaces. 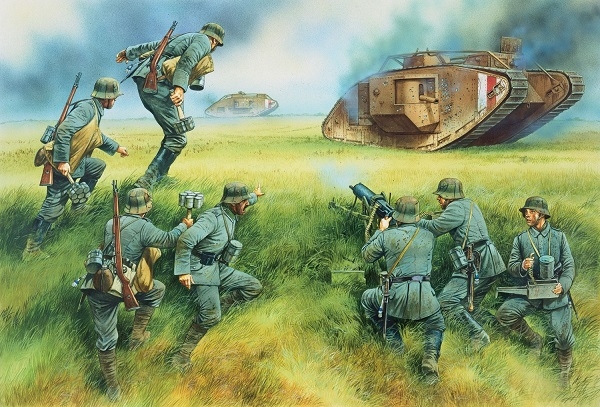 The Defence of CERISY at the Battle of Amiens.
Artwork by Peter Dennis, featured in Campaign 197: Amiens 1918.

I agreed to the idea in a somewhat dubious frame of mind. It was only after I started consulting the libraries and archives of the six principal combatant nations – Britain, France, America, Germany, Austria-Hungary and Italy – that I realized such a gap did indeed seem to exist. I knew from previous general reading that the memoirs or diaries of most of the famous figures involved – Foch, Haig, Pétain, Pershing, Ludendorff, Hindenburg among the commanders for example, or Clemenceau, Lloyd George and Prince Max of Baden among the statesmen – were subjective to a dangerous degree. Even the broadest of such studies, like Winston Churchill’s The World Crisis, had so much canvas to cover that parts of the war’s climax were only sketched in.

But I then discovered that the enormous range of secondary works were usually even more selective, as well as being often very dated. Thus, probably the best single volume study of the diplomatic and political road to the peace, Rudin’s Armistice 1918, was published in 1944; moreover, it omits events on the battlefields altogether and, even on the political side, concentrates exclusively on Germany. It is much longer ago since the classic military account of the closing phase of the war was published; Major-General Sir Frederick Maurice’s The Last Four Months appeared early in 1923. The reverse of Rudin’s study, this dealt only with the battlefronts and, almost exclusively, with the West.

This same excessive concentration on the campaign in France and Flanders applies to the few relevant studies to appear in ix recent years. One of these, for example, which deals with the last year of the fighting, was written by a specialist on the battles of the Western Front, and is predictably sound on that subject. Butthe epic Allied offensive in the Balkans which, in September 1918, knocked Bulgaria out of the war, laying bare the southern flank of the Central Powers in the process, is dismissed in three paragraphs. General Allenby’s equally brilliant campaign which, in that same fateful month, crushed the German-led Turkish army In Palestine and forced Turkey to sue for peace, gets precisely one paragraph. The offensive in northern Italy four weeks later, which shattered the armies of Austria-Hungary (Germany’s principal partner) and forced Vienna to sue for a separate ceasefire, is not even mentioned, let alone described; nor is the baleful story of the Padua armistice itself, which cost the Hapsburg armies more casualties from the conference table than they had lost in the battle.

Such an approach represents the philosophy of the ‘Westerner’ run amok. It is indisputable that the French front was, to the First World War, what the Russian Front was to the Second: the primary theatre of action, the meat-grinder which slowly devoured the sinews of German military strength. Yet, apart from the strategic impact, the collapse of those three secondary fronts in the autumn of 1918 helped powerfully to destroy, in lightening blows, something equally important – the will of the German Supreme Command to go on fighting. To underestimate that psychological factor is to ignore the trauma of Einkreisung or ‘Encirclement’ which had shaped the fears of the German people, and the plans of German military planners, for decades past. It also, as we shall see, ignores the testimony of General Ludendorff himself, the virtual military dictator of the German empire in its death throes.

The capitulation of Germany’s allies has a wider historical significance. When Germany, deserted by all her partners, finally surrendered herself, the map of Europe was barely changed by the territorial concessions she made. But the destruction of the Austro-Hungarian empire, a complex process which unfolded between the battlefield and the home front, meant that any map of central and south-eastern Europe was torn up for good. At first this was seemingly for the better; but then, as Stalin succeeded Hitler as the ultimate heir to the Hapsburgs, it became clear that it had been for the worse. It is perspectives such as these which need to be kept in mind when chronicling the end of the Great War. Those last months are not simply the tale of how battles were fought and ceasefires negotiated. They are the story of how our continent was transformed beyond recognition or redress.

The ending of the story declared itself – 11 November 1918. The only question was how and where to start. I finally chose the British victory east of Amiens on 8th August of that summer, not merely because this conveniently provided the last hundred days as a framework but because, as the famous ‘Black Day of the German Army’, this blow began the destruction of Ludendorff ’s faith in his own cause (the German Kaiser counted for little or nothing in all this) as well as the final rolling-up, on all four fronts, of his armies. 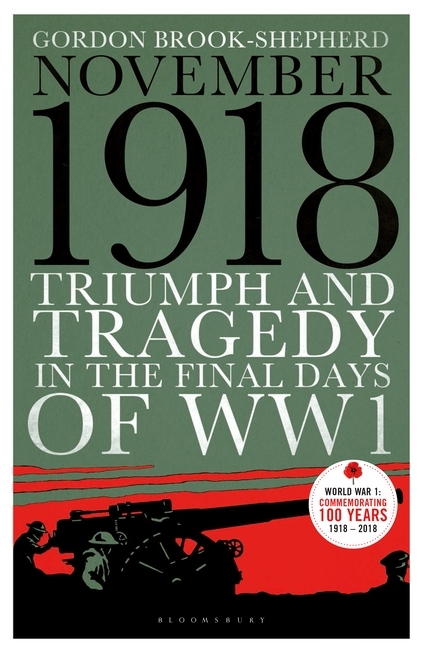 I was familiar, from earlier travels, with the general terrain of all four war-fronts and I have re-visited them again with the specific battles of 1918’s last hundred days in mind. Nature’s obstacles and amenities have not changed since then, and you have to see them to understand what the fighting meant. It is when you stand on the rocky Musmus Pass of present-day Israel and look down on the great bowl of the Armageddon plain  below that you realise the foolhardy action by which, on 20 September 1918, a young English cavalry captain secured this crucial defile by night and then routed its would-be defenders with his Lancers at dawn. The savage mountain crests – range after range of them – which divide Greece from Macedonia have to be seen to appreciate the feat involved when Serbian and French troops did the impossible by storming them, and thus opened the road to Belgrade and Sofia for the so-called Allied Armies of the Orient. You have to stand on the banks of the Piave in flood to measure the achievement of another British officer (then a brevet Lieutenant Colonel, later to become a famous general of the Second World War) who forced that broad torrent against murderous gunfire and established the main bridgehead for the final Allied offensive in northern Italy.

Finally, in the paramount theatre of battle, only a tour of the dead flat country east of Amiens shows how the hundreds of tanks allotted to the British Fourth Army could cause the havoc they did on Germany’s ‘Black Day’; just as the deep canal cutting of Riqueval, the ravines which score the Argonne Forest, and the commanding heights of Montfaucon demonstrate what the Allied soldiers faced in breaking the Hindenburg defence system along its entire length. These are battles that cannot be created simply from library books.

This was not intended as an anti-war book; but, almost unconsciously, I found it becoming one in its implications. This was inevitable when, in diaries or letters written the same day on both sides of the barbed wire on an identical sector of the same battle, I found directly opposing soldiers asking the same question: ‘What’s it all for?’ in English; or the much shorter Wozu? In German. That question we are still asking today, and there is no answer.

To read more from November 1918 you can click here to be directed to Bloomsbury's website, where you can order your copy of this incredible study.