It's publication day, and to celebrate Myke Cole has written a fascinating piece on his love of history, writing and Osprey itself.

My first work of history, Legion versus Phalanx, comes out on October 18th. I’m beyond chuffed that it’s coming out with Osprey.

No, they didn’t put me up to this. Hear me out. I grew up with Osprey books, from my earliest days, I painted miniatures using their full-color plates, nurtured my love of history based on the visual world their artists established – images as close to a photograph of ancient and medieval battlefields as one could get.

But it wasn’t until two years ago, when I first came up with the idea for Legion versus Phalanx, that I realized the power of what Osprey books do. History is – necessarily – an academic discipline. It is a domain of scholars. This is how it should be. The analytical rigor, linguistic depth, and comprehensive command of the sources absolutely requires a dedicated corps of full-time professionals.

History as a discipline rightly emphasizes original research, dedication to supporting hypotheses with evidence, and ultimately, getting at the truth.

What it doesn’t emphasize is the “Holy s**t, WOW” aspect.

Getting in the pages of peer reviewed journals like Klio or Hisperia, you’re going to get top-notch scholarship and cutting-edge research. You’re probably not going to get the stunning visuals of an Angus McBride or Richard Hook, the drama and narrative tension of pop history books written by non-historians, like journalist S. C. Gwynne’s Empire of the Summer Moon. We absolutely need the original research. We absolutely need the analytical rigor. 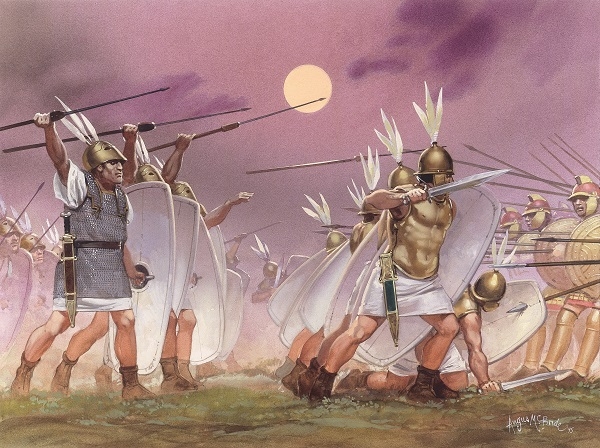 If you’re reading this blog post, you’re probably like me – passionate about history, wanting to see the field well loved and well funded. More museums with better collections opened for longer hours. More awesome TV shows and video games. More people on hand to say “Yeah, I love that too” when you wax eloquent on the battle or the leader or the kit that you’re obsessing over. Peer-reviewed journals don’t make this happen. For that, we need a marriage of uncompromising scholarship, dynamite visuals, and above all – a great story.

In other words, we need Osprey books.

I have always rejected the false dichotomy between the drama and narration of a novel and the complete abdication of story beats in strictly academic writing. We can have both. In books like Gwynne’s, like C. V. Wedgwood‘s The Thirty Years War, like Jennifer Roberts’ The Plague of War, we see what writers can do when they marry a dedication to scholarship and narrative. Because the truth is that history is far more dramatic and gripping on its own, without embellishment, than the greatest novelists can ever achieve with their fiction.

Legion versus Phalanx is my first nonfiction book, but it is my ninth published book. The previous eight are all fantasy. All I have ever known as a writer is the struggle to make characters flawed and compelling, to make plots arc satisfactorily, to make the tone of a book deliver the visceral punch that will leave readers wanting more.

History did that for me, all on its own. Pyrrhus of Epirus at sea off the Italian coast, his fleet beset by storm, diving into the water and swimming for shore. Titus Quinctius Flamininus at Cynoscephalae, seeing his left flank lost, switching to his right and sending Roman war elephants in a desperate uphill charge that would give him a chance to save the day. Demetrius of Macedon, returning from his tenure as a Roman hostage to the poisoned Antigonid court, plunged into the clutches of scheming nobles who saw him as infected with Roman sympathy. Hannibal Barca, scourge of Rome, a man so fearsome his name was invoked to frighten naughty children, finding refuge at the Seleucid court, his sage advice ignored by the arrogant king Antiochus III.

And above all, the Roman legionaries, hard-faced behind their giant shields, hefting their long knives as they ready themselves for the charge into the two-foot sweet spot where their way of war reigns supreme. The phalanx, brothers-in-arms standing nearly shoulder to shoulder, presenting 21-foot pikes in the tens of thousands, a virtual forest of iron points. 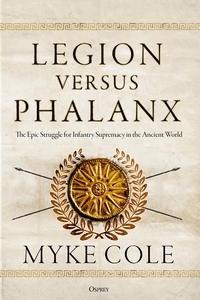 I’m telling you, this stuff writes itself. There isn’t a need to embellish, only to evoke the tale as it is related by the contemporary sources – Polybius, Livy, Diodorus Siculus, Plutarch, Appian, and on and on and on.

History can be all things to all people – rock-solid scholarship, original research, and a vivid, dramatic, gripping story aimed at as wide an audience as possible.

With many publishers, such a multi-faceted book comes along once in a while.

With Osprey, it’s a tradition.

So unspeakably thrilled to be bringing you Legion versus Phalanx, and over the moon that it will read “Osprey” on the spine.

Hope you like it. Thanks for giving me my shot.

Legion versus Phalanx is now available to order, click here to get your copy.

You can learn more about Pyrrhus by reading History Hit's recent article on the subject: Who Was Pyrrhus and What is a Pyrrhic Victory?