Rob Burman, author of Kobolds & Cobblestones: Fantasy Gang Rumbles, is back with another blog looking at the upcoming game. This time we're exploring how players create their gangs.

In today’s blog we’re going to look briefly at how to create your gang of miscreants. However, before we get into the nitty gritty of gang creation, it’s worth giving you a little bit of background about the setting in Kobolds & Cobblestones.

The game is set in a fantasy city called Ordinsport - which is kind of like a cross between the docks of somewhere like Grimsby and the cobbled, narrow streets of the Shambles in York (great inspiration for a Kobolds & Cobblestones table for anyone who is interested!). Ordinsport is part of a wider fantasy world that was once wracked by war. Opposing factions would fight across epic battlefields with scores and scores of troops clashing weapon against weapon. Eventually though, all that scrapping gets a bit tedious and the warring factions gathered together and decided to give peace a chance.

As a result Ordinsport became a city where previous enemies could live together in relative harmony. Goblins share bars with dwarves, orcs do odd jobs for elves, ratmen clean the sewers of rich men, etc. Necromancers are still a bit odd though. Despite this quest for peace, the town planners kept on an eye on the past. As a result the traditionally ‘good’ races took up residence in the more respectable part of town known as the Red Streets, while the ‘bad’ guys chose the Dark Port.

Although Ordinsport was meant to be a glittering example of the future, it has ended up being a melting pot for miscreants, mischief makers and murderers. Now gang bosses have the pick of any ne’er-do-well they please - from lowly goblins to thuggish Ogres and plenty in between.

Getting the Gang Together

All this means that when you’re creating your gang, you’re not restricted to one race! That’s right, if you want a Dwarf leader, accompanied by a couple of goblin runts, a big Golem and an Elf Fencer, you can. Races are split into traditionally ‘good’ or ‘bad’ factions (e.g. elves, dwarves and humans are good while goblins, orcs, ratman are bad) but it’s actually a good idea to mix the two together to unlock possible combined abilities.

In casual games you start by agreeing a set amount of gold with your opponent that can be used to hire gang members (in a casual game there’s no restriction on whom you can hire, unlike a campaign). Your first decision will be your gang leader. Depending upon your gang leader, it’s likely to shape the rest of your gang. For example Barry the Elf increases the healing abilities of your gang, while Dorick the Dwarf Loan Shark gives you extra gold, and Grobblar the Goblin Queen is good at using other goblins as a goblin shields to soak up damage. Along with these you can select the fearsome Kobold Egg Keeper, The Body Snatcher, Klacka the Orc Warboss and Screek the Ratman Sewer Master. 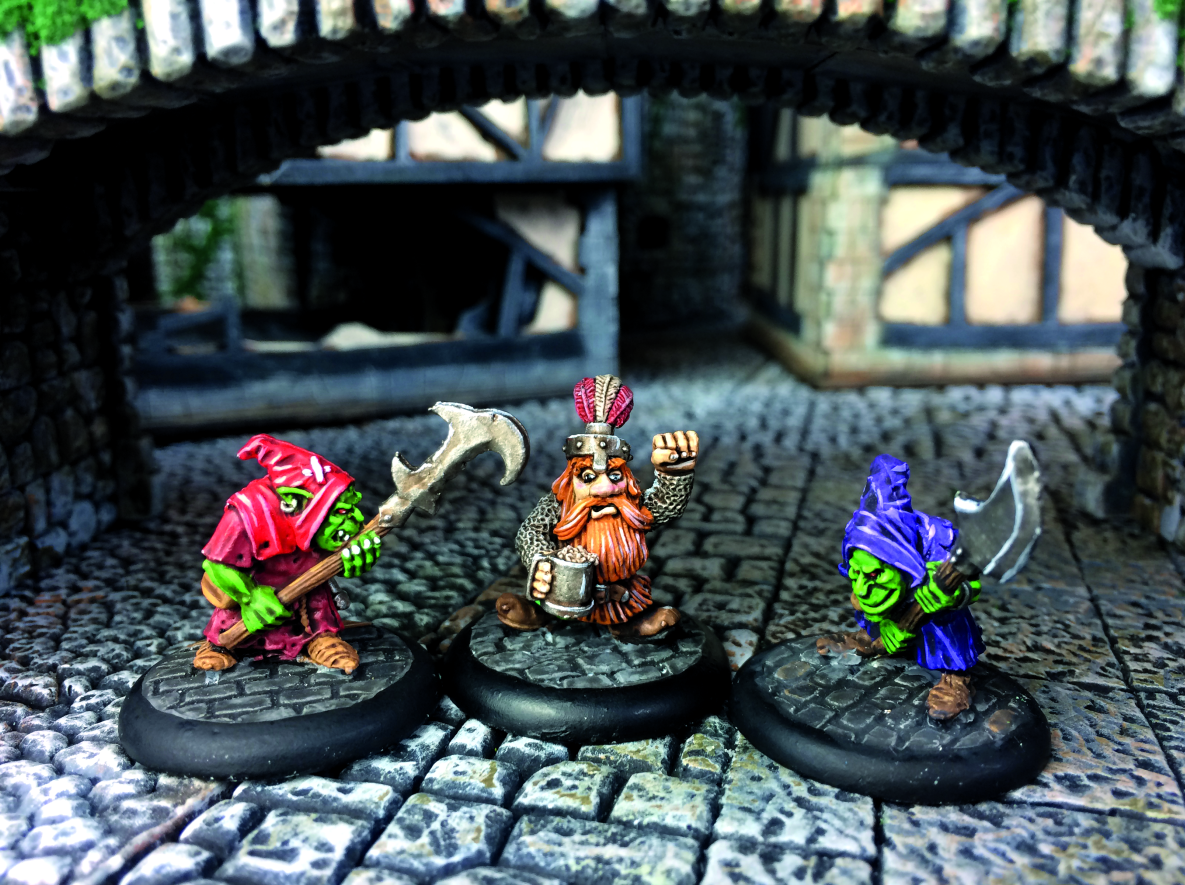 Goblins and Dwarves standing together as firm friends (well, firm may be a stretch...)

After choosing your leader, it’s on to the Runts. These are the lowest of the low. Gathered from the back alleys and gutters of Ordinsport they’re shoved into scraps with a rusty weapon and not much else. Although not much use when fighting on their own. They are handy when trying to outnumber an opponent or grabbing any scenario objectives.

With the runts out the way it’s on to the Thugs. These range from Orc Ruffians to Ratman Slavers and Elf Archers. They’re a little bit more resilient than the runts and marginally better in combat. Things start to get even more interesting with the Big Guys. Here you’ve got the option of an Ogre, Troll, Rat Brute, Kobold Gator and Golem. As you might expect, these are the heavy hitters of your gang and all of them are fighting with at least four cards. If you team them up with a runt you can outnumber your foe and unlock that all-important fifth card. 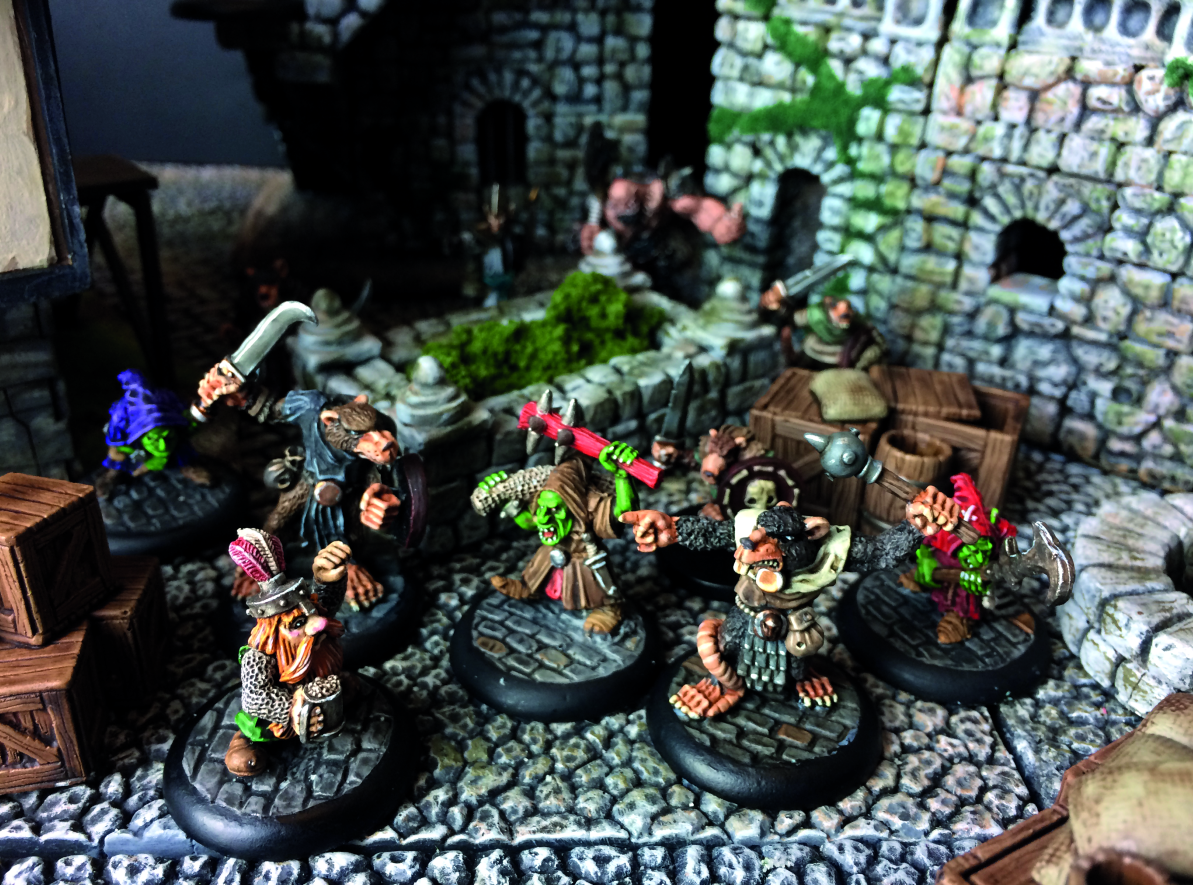 A ragtag band of miscreants - yet in Kobolds & Cobblestones they could be working together!

Finally you’ve got the Experts. As the name might imply, these are typically the most skilled in combat but you have to pay the most money to hire them for your gang. Experts range from a Dwarf Berserker (who can potentially trigger extra attacks), a Halfling Thief (who excels in stealing money and breaking into treasure chests), an Orc Bouncer (good at grabbing enemies or hitting any opponents that are pushed into him), etc. However, they’re likely to become the focus of your opponent’s attacks, so it’s good idea to keep them safe until they’re really needed.

With the ability to mix the races together, it means that gangs can vary quite a lot. Mainly because you can scrabble around in your bits drawer to find some suitable miniatures and then start scrapping. Plus, who hasn’t wanted to see goblins and dwarves fighting alongside each other?

Want to know more about the game? Check out Rob's other blog on the Card-Based Mechanics.