On this day 300 years ago, one of England’s most notorious pirates is killed in a battle led by Royal Navy Lieutenant Robert Maynard.

Raid 37: Blackbeard’s Last Fight by Angus Konstam delves into Edward Teach's (Blackbeard) final days, describing his origins before looking into the battle off Ocracoke Island and the execution of Blackbeard’s crew.

The text below captures the last fight on 22 November 1718.

'On the morning of Friday 22 November Lieutenant Robert Maynard of the Royal Navy led his two small sloops into action against Blackbeard’s well-armed vessel, the Adventure. As the two forces closed Blackbeard fired a broadside into Maynard’s vessels, and the smaller of the two – the Ranger – was forced aground on a sandbar. Maynard continued to close with the Adventure in his sloop the Jane, but Blackbeard decided to board the British vessel before her consort could rejoin the fight. He manoeuvred the Adventure so that it came into contact with the Jane’s bow, then after lobbing a salvo of grenadoes (grenades) on board Blackbeard and 14 men jumped on board the British craft. This is the scene depicted here. As Maynard had hidden the larger part of his 35-man crew in the Jane’s hold, Blackbeard presumed the defenders were hopelessly outnumbered. Only Maynard and a handful of defenders stood waiting for them on the Jane’s deck. As Blackbeard swung aboard, Maynard’s men surged up from below decks, and joined in the fight. This tipped the balance in favour of the British sailors, and so Blackbeard found himself fighting for his life. During this period there was little or no difference between the dress of pirates or Royal Naval sailors. Both wore whatever they wanted. It is worth noting that many of the features we now associate with pirate dress, such as headscarves and sashes, were late 19th-century inventions. Instead, the men wore the same garb as other seamen of the period. Maynard was the exception, and he is depicted here in the uniform of an officer of the Royal Navy.' 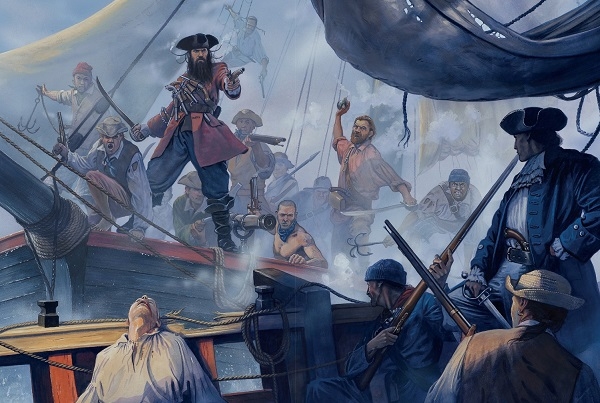 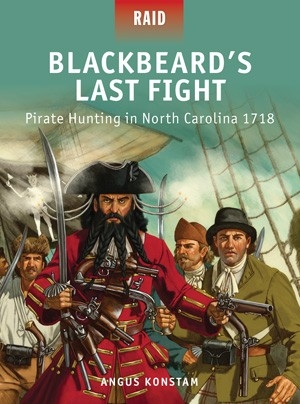 Captain Johnson recounts: ‘Teach held off all his attackers for a short while – probably less than a minute – as they shot and hacked at him from all sides. Gradually, though, his strength faded from loss of blood, and “At length, as he was cocking another pistol, having fired several before, he fell down dead”. Maynard merely reported that he had fought Teach and he had been killed, but his lack of detail is typical of after-action service reports from this period. However it happened, Edward Teach, better known as Blackbeard, the most notorious pirate in the Americas, now lay dead at the feet of Lieutenant Maynard.

With their leader gone the fight went out of the remaining pirates. Of the 14 or so pirates who boarded the Jane, eight of them had been killed or badly wounded. The remainder either surrendered or jumped overboard, and called out for quarter. During the fight the grappling hooks binding the Adventure and the Jane together had been severed, probably as the Jane’s crew didn’t want the remaining pirates to join the fight. They were allowed to surrender and were duly hauled back on board the blood-soaked deck of the Jane. There they were kept under guard, and left to patch their wounds as best they could. Both prisoners and captors knew that before long all of these pirates would be facing the gallows.’

Read more about Blackbeard's infamous exploits in Raid 37 by clicking here to order your copy.