“To make a great sports board game from scratch, first you must invent a sport.”
-    Neil DeGrasse-Tyson

Hello! Duncan Molloy here. I’m the developer of board and card games at Osprey Games, and the designer of Zoo Ball, our new dexterity game. I was asked to write a little bit about the game, so here goes!

Now that I’ve gotten that out of the way, let’s talk about sports.

Simulating a sport in board games is properly difficult. There’s a bunch of reasons for this, but mainly it’s simple - if the sport is easy to simulate, why don’t we just play the sport?

It’s the reason why really good sports board games tend to simulate the culture of sports rather than the sport itself. Bloodbowl: Team Manager is a perfect example, doing a great job of capturing the feel of a season of American football by completely ignoring the rules of American football.

My task was a little different, as I wanted to capture the atmosphere of something in play, but lower the barrier to entry. The sport I was after here was rugby. It’s similar to American football, with some key differences:

1) Play doesn’t stop when there’s a down.

2) You can’t tackle/interfere with play off the ball, i.e. you have to tackle the player who currently has possession.

3) You can’t tackle a player from behind or the side, unless they took the ball past you - i.e. you can’t run around in a big loop, play must move through the ball.

4) You can’t throw the ball forwards (though you can kick it, which is seen as riskier).

This leads to a compelling game state where the ball itself becomes the moving centre point of an hourglass shape through which all of the action filters. Like American football, a rugby team is roughly evenly split between a group of burlier, stronger forwards (sometimes referred to as ‘the pack’), and a group of leaner, faster backs. Unlike football, the job of the pack isn’t just to target/defend the backs, it’s also to create space by drawing as many of the opposition’s players into the centre of that hour glass, then quickly moving the ball out wide to the edges of the field where the defensive formation has broken down.

It’s that risk/reward of committing just enough defensively to allow you to also attack effectively that I wanted to capture, but it wasn’t going to happen by trying to simulate thirty men tactically smacking each other around. Instead I tried to break it down to it’s component parts - your blockers trend towards defense and moving as a unit, but are not limited to it. Your scorer tends to move more widely, but can act as a last ditch defender when needed. It became clear that to make the sports game I wanted, the trick wasn’t to invent the game, it was to invent the sport. 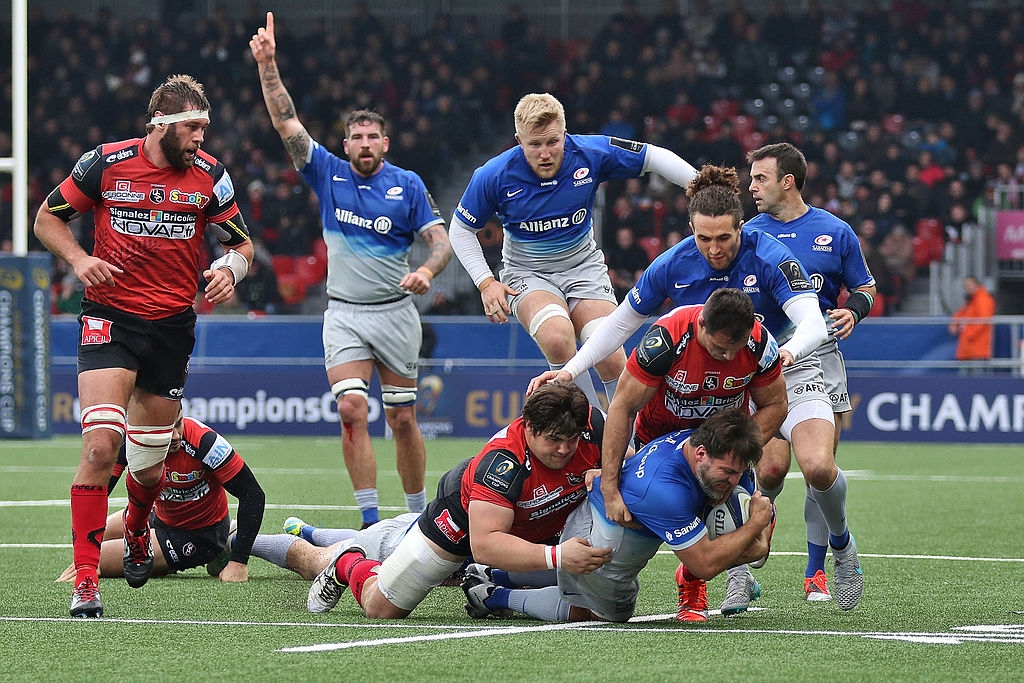 Like this, but less painful.
By Clément Bucco-Lechat - Own work, CC BY-SA 3.0, via Wikimedia Commons.

Most sports arrive at rules via play, rather than the other way around, and that’s where I started. Flicking discs on a table is great fun. Flicking them on a mat felt better. Snooker/pool is a lot of fun, but lining up a great shot and not-quite sinking it felt frustrating, as it was handing points to your opponent. No shared scoring pieces then. So how do you score? You are your own ball. If you’ve got a single scorer, what’s enough for a good defensive formation? And everything spun out from there.

Here’s how to play Zoo Ball:

Everyone’s got 4 discs - 3 blockers and a scorer. On your turn you can flick any or all of your blockers, or flick just your scorer. If you go off the mat, you come back on the side closest to your own goal. Only your scorer can score, but blockers can knock scorers into the goal.

Play usually falls into an ebb-and-flow of momentum, where some clever defensive moves, or a poor attack from an opponent, will allow an opportunity to push for goal. If playtesting is anything to go by a local meta is likely to develop, with prominent starting positions, and direct counters to those.

This is a troublingly good shot...

I wanted to capture the pure fun energy of rugby, but have ended up somewhere entirely different, with little bits of soccer, and boules, and playground games in the mix. The important bit remains though: like rugby, Zoo Ball is a game where tactical positioning is as important as skill, but where neither of those dominate the joy of play.

And for that reason, I offer the sport of Zoo Ball for your consideration to the Olympic committee. Any help readers can provide to progress in this venture would be greatly appreciated. I mean, if it’s good enough for darts...

Zoo Ball is our new 2/4 player dexterity game that pits teams of animals against one another in a bid to become the jungle MVP. Grab your copy today, and if you're attending SPIEL '17 come and give us a game at our booth (7B101)