Having established the tone of the warband with the Wizard model, I next turned to the Apprentice – his right-hand-man, minion, and general dogsbody. The classic image is of an aged Wizard and a young Apprentice, but I wanted to subvert that trope a little by having an older Apprentice to accompany my rather haggard-looking Wizard. 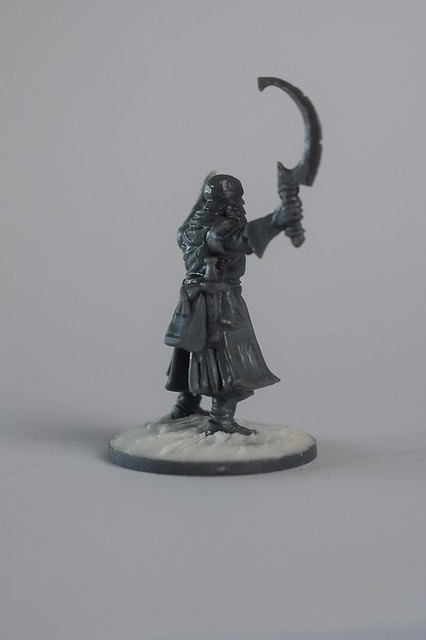 With that in mind, I started off by picking the head I wanted to use, and then building up the concept from there. The Barbarians sprue has, by my reckoning, the best selection of heads when it comes to ‘veterans’. Every one of them looks worn and experienced. The beards help, but even the beardless ‘youths’ seem to carry more than the weight of their years. I do have a penchant, it has to be said, for the combo of bald/shaven-headed and heavily bearded (with an eyepatch, for preference) – I like the vivid focal point it offers my relatively muted painting style. Happily, there are several options on the Barbarians sprue, and I picked one I haven’t used much before.

Head selected, I thought about the pose in which my Apprentice was to stand. Around this time, I decided that this was going to be a Witch warband – a school I’d not really done more than dabble in before. With the theme nailed down, it started to inform my kit-bashing choices, as ideas began to run through that filter as well as the ‘would it look cool?’ one.

I’d got the Wizard casting a spell, and decided to play up the ‘coven’ theme by having his Apprentice supporting his magic and casting a spell as well. I picked one of the Cultist bodies as it had a rather more static pose than some of the other options, and it tied into the kind of group ritual vibe I was after. The robes, while quite dramatic, are also less impressive than the cloak the Wizard has, so this helped to emphasise his subservient nature for me.

I nabbed another Cultist left arm, one that I’d trialled on the Wizard, and the sickle from the Cultist sprue that I had originally been considering for the Captain. I wanted raised arms to parallel the Wizard’s pose, and to suggest the power difference – what the Wizard could do with one hand, the Apprentice had to do with both! As-is, this gave an unfortunate ‘the kick is good’ pose, rather than a dramatic spellcasting one, so I carved away the back of the torso and affixed the arms to the new flat sections that created. A bit of filing and carving to blend the chest into the flat sides, and I was happy with the result.

The last addition was a pouch and dagger from the Cultist sprue to cover up a slight notch I’d taken out of the robes when carving back the shoulders, and to maintain my ‘wizards carry junk’ policy.

With the exception of the shoulder carving (which, to be fair, was pretty simple), this is another straightforward kit-bash. The heavy use of the Cultist sprue for this one made things easier, but it’s such a great kit for all kinds of wizardy things, thanks to the robes, the hoods, and the equipment.