The battle of Takur Ghar was a tragic but important episode in the Afghan War in which seven US service members were killed and many more were wounded. Believing they would be landing on a quiet mountain peak, US troops instead found themselves up against dug-in al-Qaeda fighters in a 17-hour battle for survival.

Fourteen years later the battle has been picked up by the media once more as the President considers whether John Chapman, an Air Force technical sergeant, deserves to be awarded the Medal of Honor for his actions. It was believed that Chapman had been killed by a burst from TAQ fighters, but video evidence suggests that he may have survived and continued to fight for more than an hour before dying in an attempt to protect arriving reinforcements.

The extract below is taken from Shadow Warriors by Mir Bahmanyar, in which he talks about the attempt to rescue Neil Roberts and the circumstances surrounding John Chapman's death.

Having successfully inserted its recon package at 0300 hours, Razor 04 was rerouted to the crash site of Razor 03. Razor 04 arrived 30 minutes after the crash of Razor 03. Here, in a bit of panic, they loaded the stranded members onto their craft and returned to Gardez. The Chinook would be too heavy to return to Takur Ghar and leaving 03’s crew behind unprotected was out of the question. If only they had been informed of friendly forces in the area from the 101st, who might have been able to establish a defensive perimeter and thus allow the SEALs to rescue their fallen comrade, but faulty chains of command and a variety of communication issues created the false notion that the friendly forces were TAQ fighters instead. Lucky for the 101st, higher command was in such a shambles that requested authorization to fire on their personnel was denied.

Once at the base, the SEALs and pilots of Razor 04 drew up a hasty plan to go back and rescue Roberts. Valuable time had been lost in returning to Gardez, and undoubtedly the men were anxious to return as soon as possible. During this phase an AC-130, now on station at Takur Ghar, reported what they believed they were seeing; a handful of TAQ fighters surrounding Roberts. The pressure was mounting and ultimately all members of the Coalition SOF wanted to be the Quick Reaction Force (QRF). Some of them were loading and unloading again when ST-6 decided to go back by themselves. No doubt this left a bitter taste in some people’s mouths. 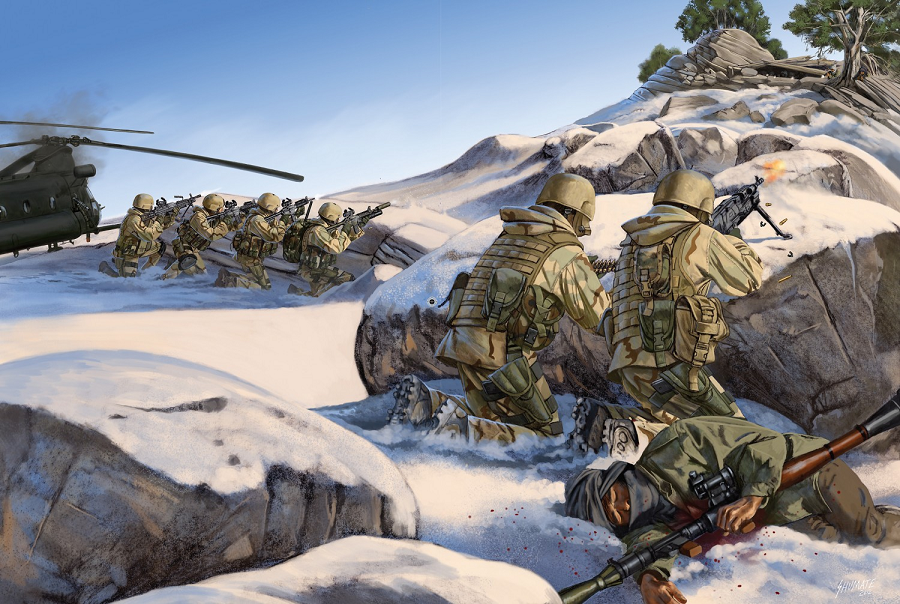 Racing against all hope, Razor 04, five SEALs, and Air Force Technical Sergeant Chapman departed Gardez and headed back to Roberts’ last known location on Takur Ghar. Some things were known: Operation Anaconda was not going well, resources were stretched, their last attempt at insertion was greeted by devastating small-arms fire, and Neil Roberts had been on his own for a long time. Was he alive or captured? For the moment, concerns of where they would land and what they would do once there occupied them enough to push back unpleasant thoughts. One thing was for certain, time was of the essence and the team could ill-afford to land below the mountaintop, as the difficult climb would add even more time to their operation. In and out near the site where they had been engaged before was the answer. With daylight fast approaching, Razor 04 was approaching the hot HLZ.

Nobody really cared about the confusing mess back at the tactical operations center (TOC). Nobody cared about obstacles or concerns or issues or... it was the reports from Grim 32 of a handful of people on Takur Ghar that occupied their minds.

Nobody really knew what was going on or what had happened – everything was an absolute mess. Moreover, the enemy was not asleep. NAIL 22 had not cleared the area because they were unable to positively identify Roberts. As Razor 04 was inbound at 0455, one of the crew spotted a TAQ fighter manning the DShK heavy machine gun. Muzzle flashes were dancing to the front of the Chinook. The left side mini-gunner alerted the pilot that they were taking incoming fire from the 11 o’clock position of the helicopter. Querying whether or not it was effective, and receiving an affirmative answer, the pilot said “Then return fire!” The TAQ fighters directed small-arms fire into the hulking mass of the helicopter as it flared and created a mini blizzard which obscured the scene and masked the surrounding incoming fire. Mako 20, the SEAL team, and their AFCCT inserted uninjured around 0500 hours local time. The left door gunner got off a short burst before his mini-gun jammed while the right rear window gunner managed to release a long burst from his M-60. The MH- 47E, Razor 04, damaged, lumbered back to base after it had remained on holding pattern as long as its fuel supply had allowed.

Having accounted for all six men, and wearing night-vision devices, the team headed for the high ground, hoping to locate their teammate Roberts. Three two-man teams advanced toward the hill, the most prominent features on Takur Ghar being a big rock and a tall tree on the northern part of the hilltop. They had landed near Roberts’ last known location but several hours had passed. The Taliban and al-Qaeda fighters had engaged the approaching helicopter from their dug-in positions. As the rescue team approached the tree, AFCCT Chapman and Mako 20, Britt Slabinski, spotted two fighters in a fortified position, engaged and killed them almost immediately. The fight was on. TAQ fighters opened fire from a nearby bunker approximately 20 yards to their front. Chapman was hit by a burst and badly wounded. The SEALs resolutely conducted immediate action drills; small-arms fire and hand grenades hit the enemy bunker. The small teams were taking fire from the north and south. From just behind the tree and rock area a machine gun opened up on them from a small bunker. Grim 32 reported that tracers and lasers were all over the place. Chapman was hit and went down, seemingly killed as the firefight grew in intensity – hand grenades, M-203 rounds, and automatic weapons fire at extremely close and lethal range. According to the subsequent Air Force Cross award citation: “Chapman engaged and killed two enemy personnel then continued advancing until engaging a dug-in machine gun nest. At this time, the rescue team came under effective enemy fire from three directions. Chapman exchanged fire at close range with the enemy until succumbing to multiple wounds. His engagement and destruction of the first enemy position and advancement on the second enemy position enabled his team to move to cover and break enemy contact. The team leader credited Chapman’s aggressive and selfless actions with saving the lives of the entire team.”

Conditions had rendered Spectre useless as friend and foe were indistinguishable, and the team’s radio was with the striken AFCCT. Two SEALs exposed themselves to enemy fire and one of them was wounded. TAQ fighters engaged the ST from numerous locations and wounded one more commando. Several fighters had been killed. One of the two-man teams, engaged to the rear, saw Mako and the others breaking contact. In a frenzied bounding maneuver, while covering each other, the mauled team jumped over the mountain’s cliff and “glissaded 800 meters down the south side of the mountain.” Sustaining 50 percent casualties within a few short moments, the Americans were hanging on for dear life. Another DoD report states that “finding themselves in a deadly crossfire with two of their teammates seriously wounded and one killed and clearly outnumbered, the SEALs had to disengage. They shot two more al Qaeda as they moved off the mountain peak to the Northeast – with one of the wounded SEALs taking point.” No doubt the SEALs had no choice but to retreat. Staying would have been suicidal as the initiative lay now with the TAQ fighters. 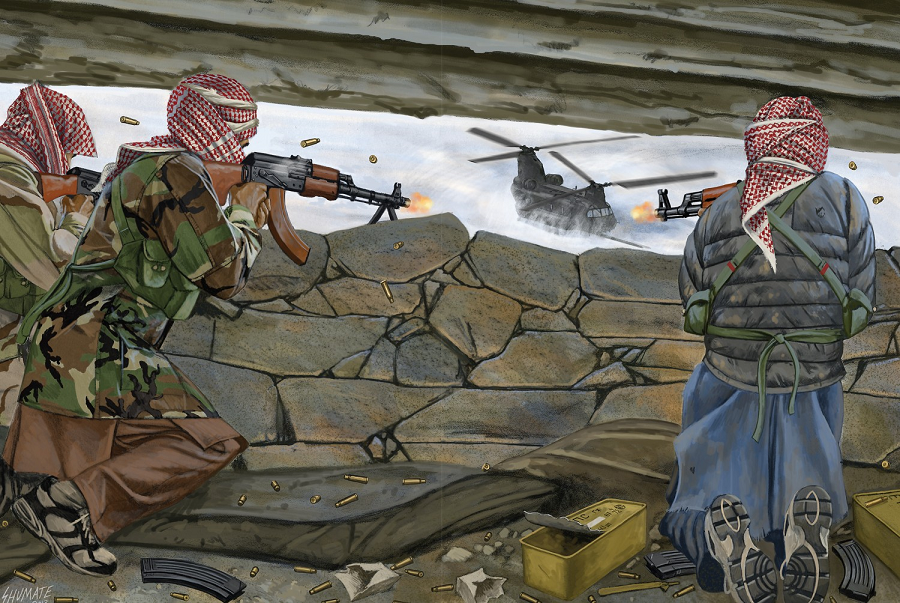 With their AFCCT dead, one of the SEALs took over communications and proceeded to contact the AC-130 on stand-by, Grim 32. Retreating down the side of the mountain, Grim 32 provided lifesaving fire with their 105mm howitzers. This fire support enabled the five men to withdraw; however, they were still in danger of being overrun. The SOF tally at this point included one destroyed helicopter, another one damaged, two seriously wounded SEALs and most importantly, two dead men. Certainly Takur Ghar had proven to be a more deadly engagement than any other part of Operation Anaconda thus far.

One disturbing fact remains to this day. As subsequent Predator footage reveals, at the same time as the SEALs break contact by popping a smoke grenade, someone is firing from the bunker. Several fighters engage the bunker near the location where AFCCT Chapman had been hit. Shortly thereafter they clear the bunker where subsequently Chapman’s body is discovered. According to Army Times correspondent Sean Naylor, Chapman had wounds to the upper and lower part of his body. He argues that probably Slabinski confused Chapman with the dead body of Roberts and as Chapman was hit but advanced the firefight became so intense that the Strike Team Leader (STLDR) did not have the opportunity physically to check the fallen comrade. Although the officially released reports did not present this scenario, other soldiers familiar with the footage and events surrounding the firefight are sure that indeed Chapman had continued the assault but was killed during the retreat of Mako. Certainly the headquarters personnel hundreds and thousands of miles away had no clue of the severity of the firefight the naval commandos had encountered. Transformation policies, micro-management and reliance on talentless but politically astute commanders failed their men yet again. Worse was to follow...

If you would like to read more about the history of the US Army Rangers then pick up a copy of Mir Behmanyar's Shadow Warriors. For more on Takur Ghar you could grab a copy of Raid 39: Takur Ghar by Leigh Neville