To celebrate St George’s Day this year we have put together a blog series looking at 6 key battles in England’s past. We’re starting off with the Battle of Hastings.

The Battle of Hastings 1066 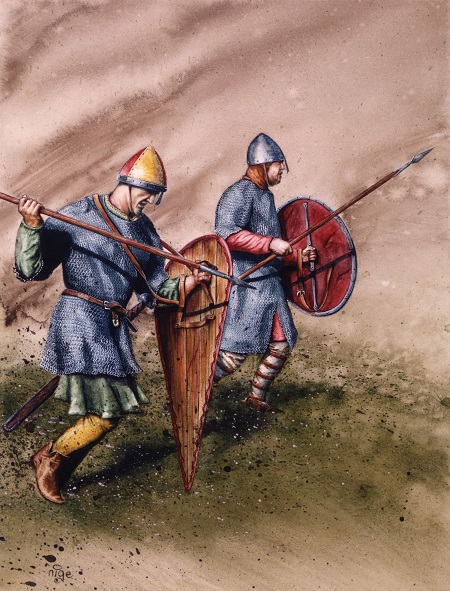 The battle began at 09.00 GMT, and was signalled by the terrible sound of trumpets. It is worth recalling the remark of Freeman that medieval battles all seem to begin in accordance with church hours. The ranks of Norman and allied archers and crossbowmen moved forward. The opening barrage hissed up the slopes but proved singularly ineffective. Given the angle of trajectory and the slope of the hill, many of the arrows were caught on the shields of the troops in the front line. Missiles that were shot higher simply passed over the heads of the entire army to fall harmlessly behind, though a few stray shafts may have struck latecomers arriving in rear of the English line. There were few archers among the English; the Tapestry portrays a solitary figure. Many, lacking horses, had not managed to keep up with Harold’s march south. Others were presumably killed at the battles of Fulford and Stamford Bridge. With few archers, there were correspondingly few arrows to be retrieved and re-used by the Normans in their turn. Their quivers, each of which probably held about 24 arrows (the later medieval ‘sheaf’) would have been emptied in a few minutes, and even if additional supplies had been brought up on supply carts they were presumably inadequate, since the archers do not appear to have made much impression at this stage but would appear again later. The first phase of William’s assault had failed; the enemy line was intact.