To mark the publication of 50 Great War Films in the UK and Rest of World we asked around the office for people to chip in with their favourite war films.

There’s a lot of great war movies out there. There are also those that are, objectively, not great, but which I find to be incredibly enjoyable. I’ve picked two examples of the latter – neither of them were ever going to win an Oscar (for acting anyway – scores and costume design would have been more plausible), but both are hugely entertaining.

Kingdom of Heaven is an alright film. It’s fun enough, but there are a few plot holes that make it a rather unsatisfying whole. The Director’s Cut, however, adds about 45 minutes to the film, and makes it a good film. Sure, you still have Orlando Bloom at his po-faced and earnest best, but it actually explains why he’s so solemn for most of the runtime, and also why this French blacksmith is a competent horseman, swordsman, and siege engineer from the outset. Historically, it’s got a few quirks, but a strenuously historical movie would probably be rather tedious! It also has one of my favourite battle scenes of all time – the skirmish in the snowy forest between Liam Neeson’s crusaders and the men sent by the local bishop to apprehend Orlando’s character – brutal and beautiful in equal measure. Plus, how can you not love a movie that includes the line “I once fought for two days with an arrow through my testicle”?

Liam and the gang before things get real.

Second, and stretching the definition of ‘film’ somewhat, is Rough Riders, a 1997 miniseries about Teddy Roosevelt and the 1st US Volunteer Cavalry. It’s a film about the Spanish–American War, which almost certainly guarantees that I’ll like it (and puts it in a very small field), but the cast. Oh, the cast. It’s a who’s who of some of my favourite actors: Sam Elliott, Tom Berenger, Nick Chinlund, Holt McCallany, Geoffrey Lewis, Titus Welliver… It also has Gary Busey, but I’ll forgive it that oversight. The battle scenes (Las Guasimas and San Juan Hill) are very well shot, and appropriately visceral, and Berenger’s Roosevelt is just great fun throughout.

This one was tricky. I was torn between this choice, The Eagle has Landed, The Duellists, A Bridge Too Far and so on… Don’t make me choose! Finally I pulled myself together and fixed on The Man who would be King. An absolute classic. Based on the short story by the now unjustly maligned Rudyard Kipling this film portrays the magic and terror of late nineteenth century India and Afghanistan and the men who fought and died for power and riches.

“Detriments you call us? Detriments? Well I want to remind you it was "detriments" like us that built this bloody Empire *and* the Izzat of the bloody Raj, 'ats on!” 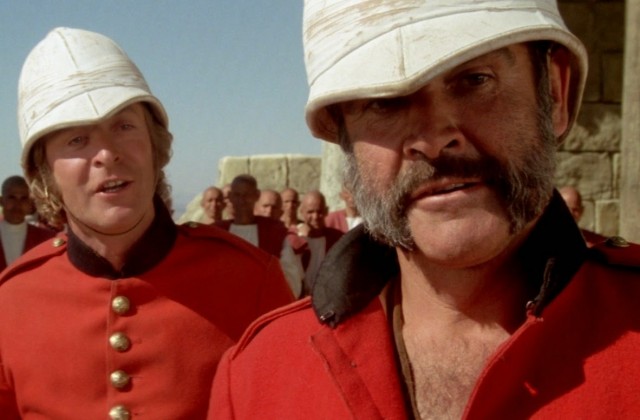 Sterling performances by Caine and Connery make The Man who would be King a must-see!

The film is anchored on the brilliant performances of Michael Caine and Sean Connery as Peachy Carnehan and Daniel Dravot respectively. Ex British Army NCOs on the make, with ambitions beyond their humble stations, they head into Afghanistan with 20 Martini Henry rifles intent on taking over a kingdom and making themselves rich. Initially successful their fortunes soon unravel and they ruined by delusions of grandeur, lust and greed. However, despite being tested, their great friendship and warm banter survives to the end and they meet their fates with the bravery of stoicism of the British Redcoat.

Now listen to me you benighted muckers. We're going to teach you soldiering. The world's noblest profession. When we're done with you, you'll be able to slaughter your enemies like civilized men.

Directed by John Huston, filmed at Pinewood and in France and Morocco, the film has an able supporting cast with Christopher Plummer as Kipling and Saeed Jaffrey as the lost Gurkha, Billy Fish, who dies so bravely with his kukri in his hand.

Although a fictional story there was an American adventurer, Josiah Harlan, who travelled, intrigued and fought his way around the Punjab and Afghanistan, becoming the Prince of Ghor. Ben McIntyre’s account is worth a read as is our Weapon title on the Martini-Henry rifle.

Nazis make excellent villains. They represent the very worst of humanity: violence, hatred, fear of others, destruction. This has meant that in most films about World War II, they generally are portrayed as being nothing less than pure evil. Rarely are they especially developed characters, and this is in many ways because it is very hard for us to think of Nazis like Hitler, Himmler and Goebbels as human beings – we like to think of them more monolithically as monsters.

Downfall is set in the last 10 days of World War II in Europe, and takes place almost entirely in the Führerbunker.  As the Soviets advance through Berlin, Hitler desperately tries to organise a defence of the Reich, all the while showing his contempt for the people of Germany and the Wehrmacht in particular. As Berlin burns, the bunker becomes ever more disconnected from reality, as the leading Nazis come to terms with the fall of their empire and one by one they desert or end their lives. 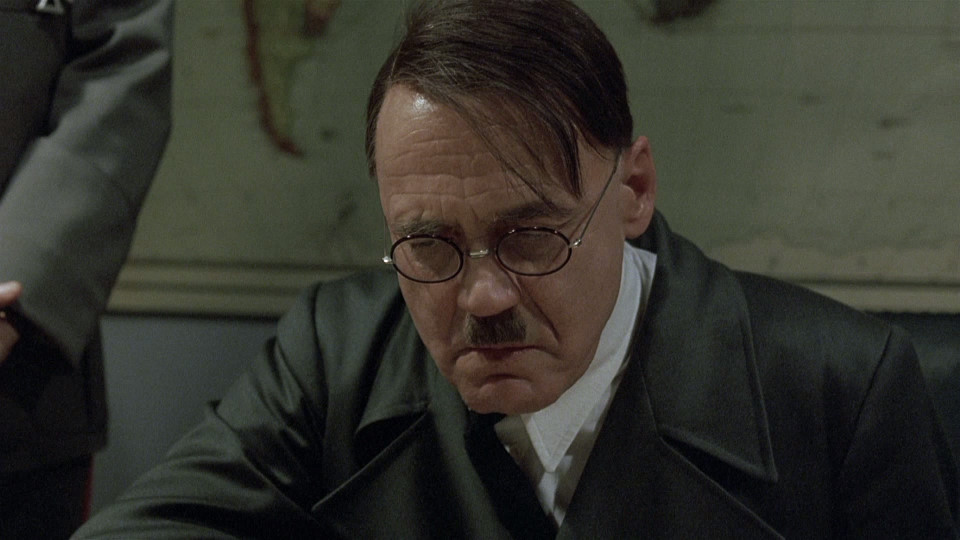 Despite the serious subject matter, or perhaps because of it, Downfall is frequently parodied online.

Its most famous scene is a meeting between Hitler and his generals where he yells in fury at their perceived incompetence.  Since the film is in German, people on Youtube have taken to parodying the scene by changing the subtitles to something more mundane such as Hitler railing against the casting of Ben Affleck as Batman.

Yet for me the most fascinating thing about the film is that it presents the leaders of the Third Reich as broken men at the end of their world.  Some are unable to come to terms with the horrors that they have perpetrated, others in disbelief that the project that the believed destined for glory was crashing down at their feet. Some of the suicide and murder scenes are truly horrific, none more than Magda Goebbels poisoning their children as they slept, unwilling to ‘subject’ them to a world without Nazism. They are still horrific, despicable people, the worst of humanity, but Downfall presents them as human nonetheless.

It reminds us in a time when atrocities are still being perpetrated around the world including in Orlando last weekend that there is nothing inhuman about acts of horror and terror. The people that cause them may be the worst of us, but they are still humans. And it is that that makes Hitler and his acolytes all the more despicable in this film. There are no heroes in this film, you root for nobody, but there is no greater examination of the human condition at its most strained than Downfall.

A long time ago, when I was in college at the University of North Carolina, my friends and I developed our own 4th of July tradition. Every year we would gather at someone’s house, usually with several buckets of Bojangles chicken and biscuits and watch the glorious 4 hour and 15 minute Civil War epic that is Gettysburg!

There are so many reasons to like this movie, it is hard to know where to begin. First off, it is just beautiful to watch. Many scenes were filmed on the actually Gettysburg battlefield (the first time that had been allowed), it used thousands of re-enactors, the costumes are fantastic, and the beards! So many good beards! Probably the nicest thing about this movie is that it shows both sides of the battle, and portrays them both sympathetically. For the South, the movie follows General Longstreet (ably played by Tom Berenger) so you get a very high level command view. On the Northern side, the movie follows Col. Joshua Chamberlain (Jeff Daniels and his amazing moustache!) and gives a much more soldier’s eye view of the battle. 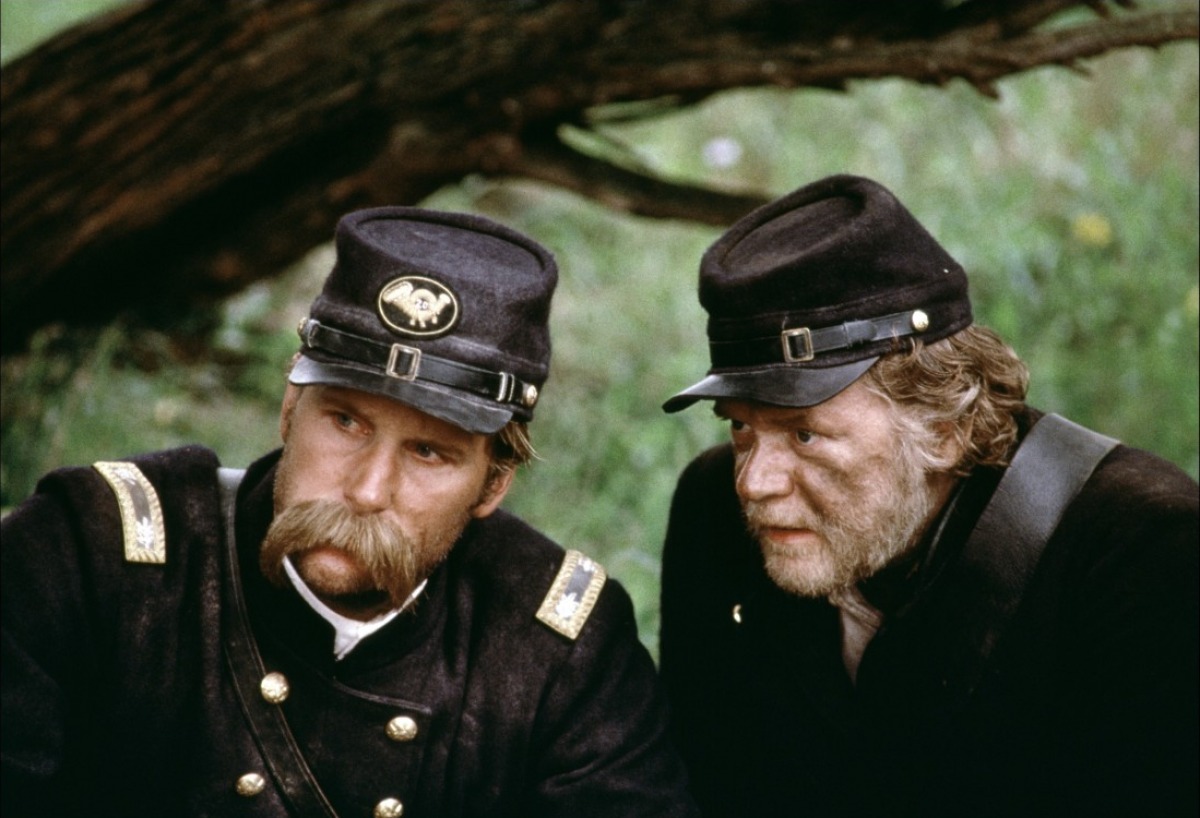 Glorious facial hair is just one of the many reasons to watch Gettysburg.

Sure the movie has a couple of historical hiccups or debatable bits, but it still manages to present a good overview of what is an enormous, complicated, three-day battle in a highly entertaining fashion.

For reasons unknown, the American Civil War has produced very few good movies (see also Glory), but this one makes up for a lot of failures.  Just don’t watch the sequel…

My favourite war film is Master and Commander: The Far Side of the World.  Set during the Napoleonic Wars, it follows the crew of British frigate Surprise, lead by Russell Crowe as Captain Jack Aubrey, as they battle the elements and occasionally each other in a bid to defeat the Acheron, a better armed French warship.  Although marketed at the time as  a conventional action-filled thriller, ‘Master and Commander’, like the Patrick O’Brian books it’s based on, is quite episodic, and as well as chasing the Acheron, the crew battle storms around Cape Horn, deal with a supposedly cursed midshipman and pursue the study of natural history on the Galapagos Islands.  The key relationship in the film is between Captain Aubrey and his friend the civilian doctor and naturalist Stephen Maturin, played by Paul Bettany, with whom he discusses the morality of the mission in between playing string duets together.

When not swashbuckling, string duets are the order of the day.

‘Master and Commander’ is a great war film for several reasons.  Firstly it looks and sounds great, with fantastic visuals and cinematography, with fantastic shots of the ships, storms and Galapagos Islands accompanied by sublime music, both classical string pieces played by Aubrey and Maturin, and music composed for the film.  Moreover, its script and depiction of the period its set in, and the people that make up the ship’s community feels rough and authentic, from the mix of ethnicities and nationalities within the crew to Aubrey accompanying an anecdote about Lord Nelson by commenting that he always tries to say it as Nelson did.   Any feeling of sentimentality or overtly cloying patriotism is offset by the character of Stephen Maturin, who provides the counterpart to Aubrey’s more conventional ideas of duty, without feeling like a modern character parachuted into the story.  It also has some great action sequences of both ship to ship and hand to hand combat, and does not shy away from showing the cost of war to both sides, although this is mischievously undercut right at the end when it turns out that the French haven’t been entirely honest...

What would top your list of favourite war films? Let us know in the comments section below!