Today marks the 750th anniversary of the Battle of Evesham, where Simon de Montfort lost his life in a crushing defeat at the hands of the Royalists. The text below is taken from Campaign 285: Lewes and Evesham 1264-65, published in July 2015.

Early on Tuesday 4 August 1265, a chosen band of killers strike down the great earl, decapitating the baronial cause.

The deaths of Simon de Montfort and his closest companions at Evesham brought baronial resistance to Henry III’s arbitrary exercise of royal power to a sudden and brutal end. The deliberate killing of such high-status individuals was deeply shocking. Usually knights were granted quarter, and held for ransom. The splits in England’s ruling elite, however, ran too deep. Simon’s opponents swore he must die. Approaching the battlefield, they nominated 12 knights led by Roger de Mortimer to do the deed. 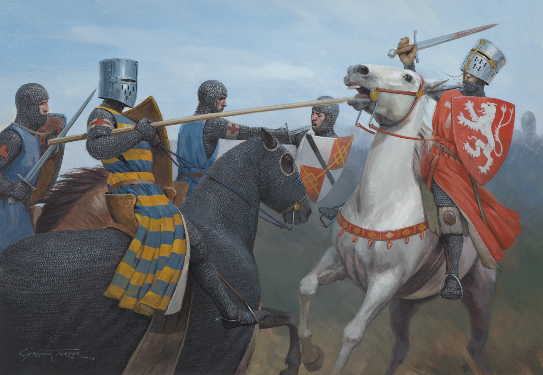 Disregarding the encircling carnage, they forced their way through the press to reach the earl, where their leader ‘struck him through the neck with his lance, and it was Sir Roger de Mortimer, for he could be recognised by his armour’. Hugh Despenser, the Tower of London’s baronial seneschal, was cut down at Simon’s side. At least 34 other rebel knights perished in the massacre.

Green Hill was open common land. It had no obvious feature to pinpoint the tragedy’s location, whether at the crest, near Battle Well as generally believed, or nearer the town at ‘Godes Croft’. Today’s remaining farm land is arable; in 1265 it was pasture, the grass trampled by hundreds of hooves, throwing up a cloud of dust to hide the shameful blow.

If you are interested in reading more be sure to pick up Campaign 285: Lewes and Evesham 1264-65 by Richard Brooks, illustrated by Graham Turner.