On the 22nd of June, 1941, Hitler launched Operation Barbarossa, an attempted invasion of the Soviet Union. Having seen the Russians falter against the Finns in the Winter War the Fuhrer was optimistic, stating that “we have only to kick in the door and the whole rotten structure will come crashing down”.

A little less than four years later the Russians had surrounded Berlin following a counter-offensive that pushed the Germans out of Eastern Europe. The capital was heavily bombarded by artillery and airstrikes, whilst every day the Russian troops crept closer to their prize. As they moved into the city they found that the German opposition varied from well-trained soldiers to children serving in the Hitler Youth. The desperate last stand came to an end with the fall of Berlin on the 2nd of May, with Hitler and many other high ranking Nazis having committed suicide in the previous week.

This photo was taken on the 2nd of May, 1945. Soviet soldiers can be seen hoisting their red flag over the Reichstag building as the Soviet Union announces the capture of Berlin. 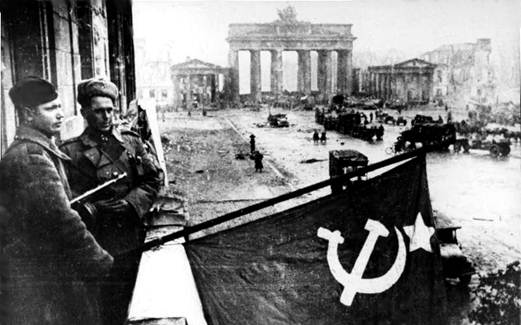 To learn more about the concluding battle of the Second World War in Europe check out Campaign 159 – Berlin 1945:End of the Thousand Year Reich by Peter Antill.