On 15 November 1864 Union General William Tecumseh Sherman began his famous March to the Sea, leaving behind him the smouldering ruins of Atlanta. His aim was to apply the principles of ‘scorched earth’ warfare in a campaign against the Confederate states, crippling their production capabilities and destroying their supply lines to bring an early end to the war.

The quote below comes from the memoirs of General W.T. Sherman

... We rode out of Atlanta by the Decatur road, filled by the marching troops and wagons of the Fourteenth Corps; and reaching the hill, just outside of the old rebel works, we naturally paused to look back upon the scenes of our past battles. We stood upon the very ground whereon was fought the bloody battle of July 22d, and could see the copse of wood where McPherson fell. Behind us lay Atlanta, smouldering and in ruins, the black smoke rising high in air, and hanging like a pall over the ruined city. Away off in the distance, on the McDonough road, was the rear of Howard's column, the gun-barrels glistening in the sun, the white-topped wagons stretching away to the south; and right before us the Fourteenth Corps, marching steadily and rapidly, with a cheery look and swinging pace, that made light of the thousand miles that lay between us and Richmond. Some band, by accident, struck up the anthem of "John Brown's soul goes marching on;" the men caught up the strain, and never before or since have I heard the chorus of "Glory, glory, hallelujah!" done with more spirit, or in better harmony of time and place. 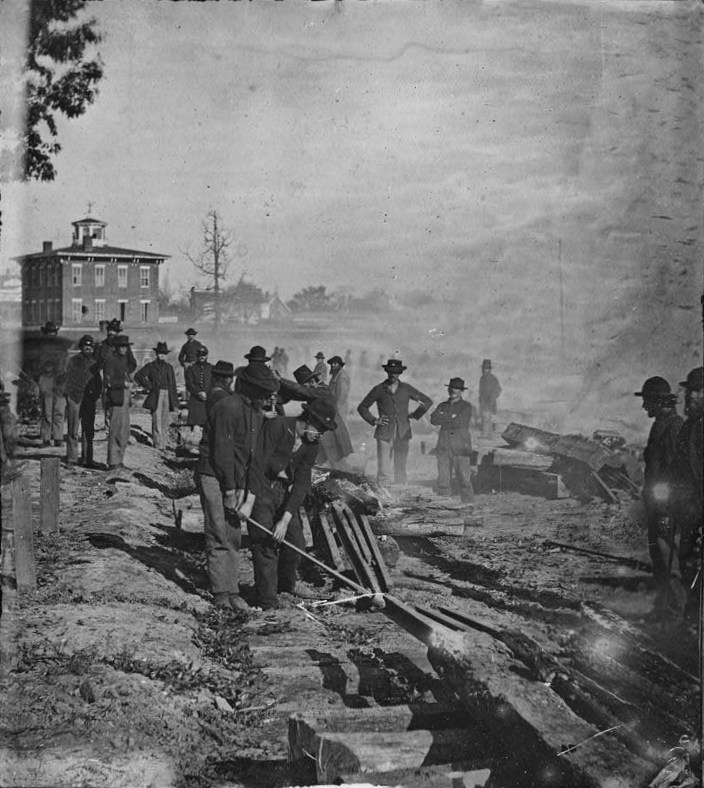 In this photo we can see Sherman’s men destroying a railway in Atlanta. Often the metal tracks would be heated up and bent around tree trunks to prevent from being repaired, transforming them into loops of metal that became known as 'Sherman’s neckties'.

If you are interested in reading more about this period then be sure to pre-order the upcoming Campaign 290: Atlanta 1864 by James Donnell, scheduled for release in February 2016.