The 5th of June, 1917 marked the start of conscription in the United States with the ‘Army registration day’. With that in mind we've gone for something a little different with our list this week, giving you some examples of British appeals for exemption from conscription. 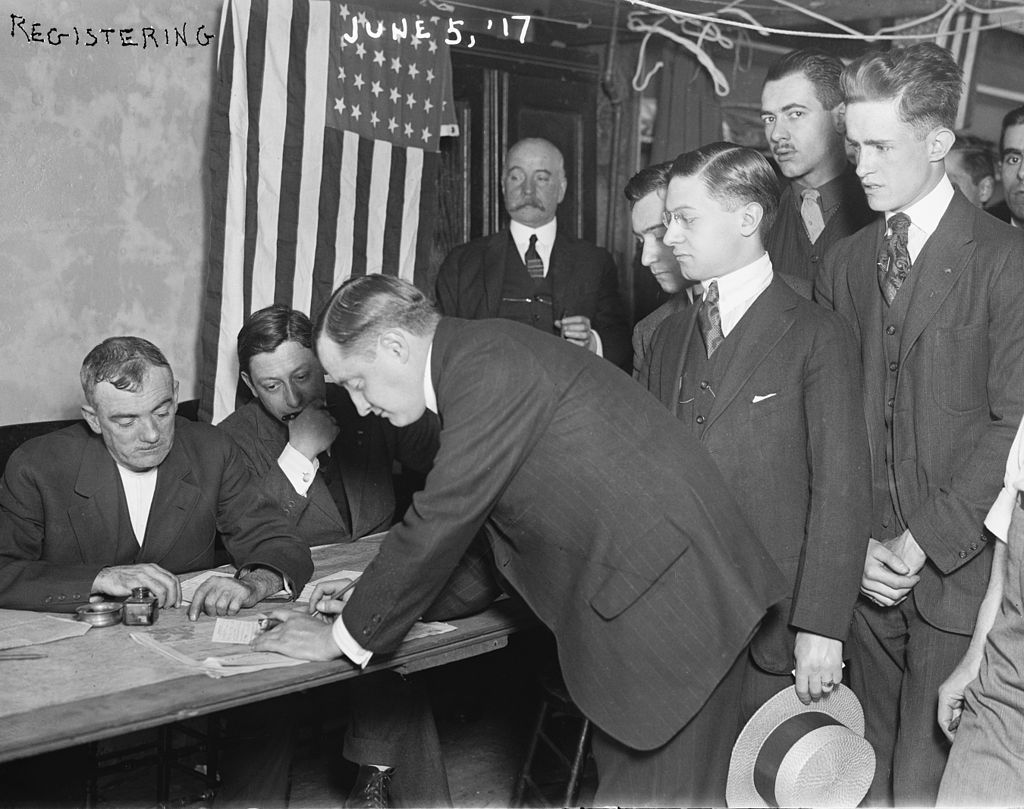 The above photo shows young men registering for conscription in New York on 'Army registration day'.

Whilst some men were needed on the frontlines, others were needed back home. Case number M5650 saw Arthur Cragg granted exemption as he was indispensable at a box factory which held two Government contracts.

The appellants have lost a large number of men who have joined the forces, and they have been substituted with lads and girls. Cragg is in entire charge of these, and he supervises and instructs them. It would be impossible to find another man to take his place, and if he has to join up the Department must be closed. Appellants have two contracts for the British America Tobacco Co., which are under Government contracts.

The man be exempted from the provisions of the Military Service Act, 1916. The exemption is temporary until December 31st. 1917. The ground on which the exemption is granted is national interests.

For some, applications were made on the grounds of conscientious objection, either because the idea of taking a human life was utterly abhorrent to them or because they didn't believe in the reasons behind the conflict. The latter was certainly true of Arthur Thomas Freshwater, case number M1702, who felt that the working classes had no interest in the Great War. Tribunals were often very heavy handed on such applications.

The appeal be dismissed and leave to appeal to the Central Tribunal was refused.

Some men who were conscripted into the British army suffered from medical conditions that made them unfit to serve. Of course, this led to a wide range of medical conditions being put forward ranging from heart problems to issues with teeth. In case M6006, Reginald Edwin Vernon Stebbing successfully appealed on the grounds that he suffered from bronchial asthma.

I am a constant sufferer of Bronchial asthma and am attaching herewith a Doctor’s certificate. I also enclose a certificate from the Inspector of the Metropolitan Special Constabulary showing that I am performing duties of National Importance as a Special Constable

The man be exempted from the provisions of the Military Service Act, 1916. The exemption is temporary for four months from the 14th March, 1918. The ground on which the exemption is granted is Regulation 16 (e) Ill-health.

In some cases it was felt that compelling a man to serve in the military would cause too many issues at home. This may be due to important business and financial obligations or an exceptional domestic situation. In case number M2941, Frederick George Stephens was granted exemption from military service as his wife had been placed in an asylum and he had 5 children to take care of.

Wife removed to Middlesex County Asylum in January last. Medical Superintendent unable to state period for which detention will be necessary. I have 7 children to provide for, the 2 youngest I have had to place in other hands to be taken care of, the remaining 5 all attend school and I am acting the part of both Mother and Father to them

The man be exempted from the provisions of the Military Service Act, 1916. The ground on which the exemption is granted is that serious hardship would ensue if the man were called up for Army Service, owing to his exceptional domestic position.

Osprey have a range of titles for you to explore should you wish to know more about soldiers in the Great War. Click here to see absolutely everything we have to offer.

The cases referred to in this blog can be found on the National Archives website, where the records of the Middlesex military service appeal tribunal have been digitized as part of their ongoing programme for the centenary of the First World War.