I write to you in a time of darkness and despair. I have been summoned to the Osprey HQ , who have requested that I assist them with a dangerous problem. My name is Von Halzig; I have led a peculiar life revolving round a very peculiar career, and I am afraid that it is in this capacity, as a a Vampire hunter, that the people at Osprey have employed me.

Roughly a week ago I was lucky enough to receive an advance copy of Vampires: A Hunter's Guide in the post. I'm not a reviewer - but the information in this book could save lives and souls and is thus critical for a person in my line of work.

Simply put, I couldn't wait for publication date (I'm sure Osprey fans will empathise) and frankly, considering that I contributed some of my hard-earned knowledge and techniques to the volume, I thought it only fair I should get one.

But back to the matter at hand - in the same parcel as the book was a spidery, scrawling note:

Von Halzig, we're under attack and urgently require your assistance. One of the beasts walks amongst us, please come quickly. Please find enclosed a gift, something that might help.

Decidedly different in tone to the usual advance copy slip: With compliments from Osprey Publishing.

So I hurriedly boarded a plane to London, England, from where I caught a train to Oxford. On the 4A bus from the city centre to Cumnor Hill, the hallowed setting of Osprey HQ, an intangible sense of unease was rising within me. True, I've dealt with tens, maybe even hundreds of these creatures in my time. but something told me that this was to be the most challenging assignment of my career.

I arrived on the scene to find Osprey Towers a hotbed of terror, speculation and rumour. Editors spoke in hushed tones to one another, production personnel peered from behind their computer monitors before quickly averting their eyes. Managing director Richard Sullivan took me into his office to brief me properly on the situation as it stood. He explained that, one evening, the 'graveyard shift' of employees had stayed particularly late working on the launch of a new series book. The five workers in total were preparing to leave when a sudden, unexpected power cut plunged the entire office into darkness. This lasted for about half an hour, but when the lights came back on, the Lord of Osprey Adventures, Joseph McCullough, was found slumped over in his seat, pale, unconscious and with two small puncture marks on his neck, from which a small trickle of blood was leaking.

The four unharmed members of staff were naturally terribly shaken by the incident - they immediately brought the wounded Joe into the board room and and telephoned an ambulance.

Then the funny business started.

The ambulance never arrived, and after an hour's wait, the staff tried to ring up again only to find the phone lines cut. Joe remarkably regained consciousness and a bit of colour in his cheeks, not remembering anything and speaking of strange and terrible dreams he must have experienced whilst unconscious. In his eyes was a black sheen that unsettled the others, but other than that he looked to have recovered from his ordeal remarkably quickly.

'Screw the ambulance' he said. 'I'll be alright.'

When the Osprey team arrived at work the following morning, the experienced heads in the Dark Osprey division soon came to suspect that a dread creature of the underworld was responsible. But how had the beast entered the building? Everyone knew that the cleaning team, Leslie & Michael, shut and lock the windows at the end of every working day. Similarly, all the doors into the building are automatically and electronically locked after a certain point.

Richard Sullivan has implored me to try to track the devil down at all costs. I have been here now for three days, conducting forensic investigations and interviewing all the staff members. There has been some odd behaviour for sure, although that is understandable given the tense and fearful circumstances. Nevertheless, I am convinced that the beast is among us! After a series of interviews and extensive investigations, I have narrowed down my list of suspects to four, as detailed below. I need your help! Who, of the four, do you think the real vampire is? 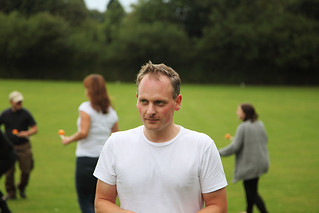 Commissioning editor of the NVG and AVG series, Milner is all fun and games at first glance. But co-workers have skittishly spoken of something sinister about the suave Scot, a nameless, macabre quality which causes people to fall silent when he enters the room. Said Richard Sullivan:

'Tom always gets what he wants.'

Which brings me to my next suspect, the MD himself. There are unsubstantiated claims that Richard has lured people to Osprey to recruit them using strange mind powers. Michael Kazich asserted:

'There I was minding my own business, wandering the streets of Liverpool, when a shadowy figure spoke to me in dream. Almost against my will, the next day I was inexplicably wearing a suit, speeding to Oxford on a train. Whilst looking out of the window, I could have sworn I saw an eye appear in the moon. When I met Richard for my interview, I knew I'd seen him before, but couldn't figure out where...' 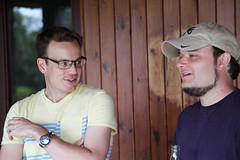 This one is just a hunch, based on the hungry look in Mike's eyes when conversing with Joe at the Osprey staff summer party... 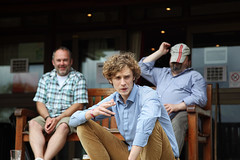 Altogether too accommodating, and too keen to help with my investigations. Pale in complexion with suspiciously long canine teeth, and I've noticed him watching me from the shadows.

Which one is it?! If you can help me, I will be eternally grateful, and so will everyone at Osprey Publishing, I'm sure. The fate of military history in Britain depends on you!

As a reward: I can see to it that the Osprey crew make sure that the name of ONE correct guesser appears in one of the future Hunter's Guides. Please leave your guesses below, or on following updates on the situation. Choose wisely, as you can only guess once! We will also accept answers on Twitter (using the hashtag #whobitJoeMac)& Facebook.

So please help me in finding the culprit, and inscribe yourself into Osprey literary history as a reward.