Pegaso Models have sent us new images of some more stunning, and I mean stunning, kits in white metal from their newest releases. I’ll go through all three of them in a little detail.

The first – kit no 90-914 is from the “Crusaders” series. This one is called “Brother Knight of Saint John” Sculpted by Viktor Konnov, this kit is painted masterfully by Diego Ruina who is well known for his excellent work on many other kits. The texture and depth of the figure make painting it an easier job I suppose. But you can see here this man knows how to paint!

Made from thirty-two pieces of white metal, this kit is in large 1/20 scale and would look great next to the other kit in the range (90-915) shown here who he is locked in mortal combat with. Kit 90-915 which looks to me like a Saracen knight - what a diorama to own!

This resin bust comes in eight pieces and was sculpted again by master sculptor Victor Konnov, and this kit was painted by Pietro Balloni. The detail again in the sculpting is second to none, which we have come to expect from Pegaso.

Taken from their 14 Great Britain XVII-XIX Century series this 1/24 kit features ten parts in white metal. Sculpted by Benoit Cauchies, this cavalryman has exquisite detail in his garb and his weapons and medal regalia on his chest. Another impressive paint job by Massimo Pasquali, this figure is - like all of the figures shown here - on sale at Pegaso Models website.

Why am I showing you a set of resin droptanks? Well these are an add-on to the new Encore Models A-37 dragonfly kit that was announced earlier this year that’s why! These tanks are four in a pack and come in at a 10% off deal at US$10.79 from Squadrons online shop.

I really am impressed by these tanks as they will just add to the awesome wide presence of this little Dragonfly kit. The four resin 100 gallon pattern drop tanks, each with appropriate raised and engraved surface features, correct circular cross-section, ventral flange, and integral vertical fin and separately cast horizontal fins. They aim to fit both the new Encore and the older Revell/Monogram A-37/OA-37 kits.

Legend Productions from Korea has updated our news section this week with a great add on for the 1/35 jeep from Tamiya to make it into a fully-fledged WWII SAS jeep.

If these detail sets look as good as they do in the pictures, they can really cover up the basic details of some of these older base kits and transform them into something looking a lot more complex, giving more depth and adding something of the human touch to an otherwise plain vehicle. A great site for these SAS jeeps is here.

This kit and other news releases for Legend in Vehicles, aircraft and figure add-ons are available now from their site. MiniArt has come up trumps again with the 35th scale figures. If you have a spare tank in your stash, I guarantee they will have a crew to man it for you!!

This kit contains five figures from WWII from the Italian tank force, two with the heavy leather coats and two tankers in standard uniform and the fifth in overalls. Here is the sprue containing 63 parts. The next tanker kit I want to show you is kit number 35126 - U.S. TANK CREW 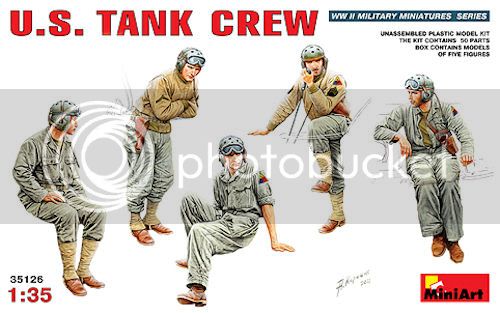 Designed with the help of Model Rectifier Corporation (MRC) in the US, this kit shows the five figures seemingly at rest or waiting in their tank for orders. This set compliments the winter tank crew soon to be released by MiniArt.

Kit no: 35121 is the BRITISH TANK CREW. WINTER UNIFORM The last tanker kit to be announced, also in 1/35th, should be with us soon. It seems if you have a crewless AFV Masterbox has you covered!!

Lastly and very interestingly, Korean model makers Wolfpack design have sent us news of this newest add on/conversion kit this month. It is the HH-60P conversion kit to suit the somewhat under-built Academy Blackhawk kit in 1/32.

The problem with the original is that the Blackhawk keeps on being updated and you want to have a definitive or standout kit when most of the ones out there seem to be Gulf War I standard. This kit features Forward looking infra-red and the associated new instruments in the Korean version, the large “gull” wing fuel tank pylons as seen on South Korean aircraft.

The 24 resin part conversion also features decals printed by the masters at Cartograf and an A4 colour printing manual so you have no chance of getting it wrong on the kit! At $30 this kit represents good value for anyone wanting to make their Blackhawk in anything but tan and sand camo!

On the Wolfpack site they mention they have planned these exciting add-ons to the Academy kit: UH-60 Gull-wing type wing conversion set + HH-60P Black Hawk 'Medevac' conversion + the HH-60G PaveHawk update (me please) and the UH-60J Black Hawk JASDF conversion set. – sounds good to me!

Till next week check out these items if you get a chance and please do enjoy your modelling!