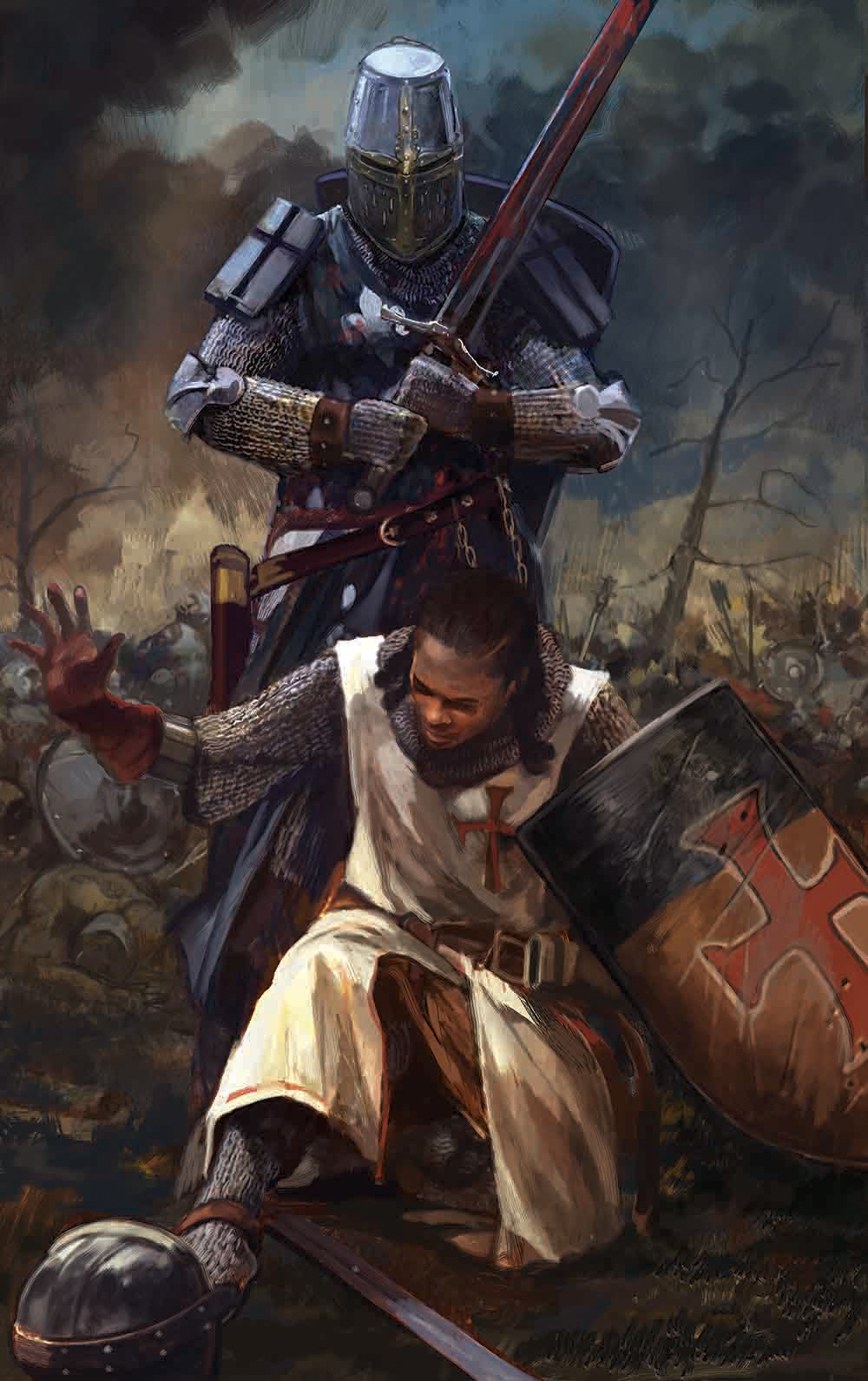 After a great run for Osprey Roleplaying last year, we have four brand-new releases coming for you in 2023! Read on to find out more and see covers and draft art for the first time...

We're proud to be announcing another big year for our roleplaying games. From new standalone rulebooks to a supplement for one of our existing games - and covering a range of genres - we have something for everyone. We can't share everything just yet, but we've gathered together key information for all four upcoming titles here. Some of the artwork is still in a draft stage, so not everything you see here is final, but we were too excited to show off what we've got so far!

And, this time next week, we'll have more announcements for you, so be sure to follow us on social media and sign up to our newsletter. See you Wednesday 25th.

But first - welcome to the new worlds Osprey Roleplaying has to offer in 2023. 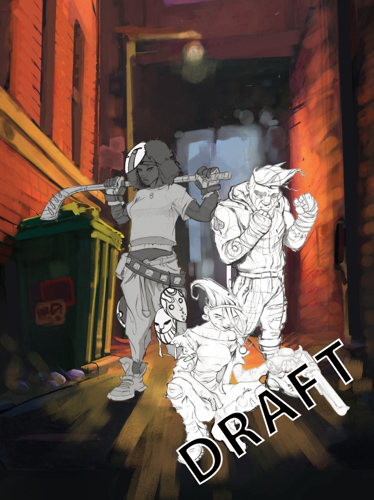 "They took your city. It's time to wrap your knuckles, rally your friends, and take it back. One block, one brawl at a time. Urban Decay is a bare-knuckle, knock-down, drag-out game
of fighting to save the places you love."
- John-Matthew DeFoggi

A roleplaying game of fast-moving beat ’em up action –
take to the streets, take on the gangs, take back your City!

As night falls over the City, a storm is brewing in the streets below. The gangs have taken over. They rule with an iron fist, their will enforced by armies of thugs and brawlers. Gutters run red. The authorities have either sold out or are stretched too thin to make a difference. Might makes right.

You will not tolerate this any longer. Uniting with a crew of like-minded individuals, you head out to reclaim your home, protecting neighbourhoods, inspiring others to take a stand, and clashing with gang enforcers as you work your way through their ranks, seeking to cut the head from the snake coiled at the heart of the City.

Urban Decay is a roleplaying game of beat ’em up action inspired by classic arcade video games, movies, and comic-books. Players take on the roles of warriors, martial artists, vigilantes, and ordinary citizens, taking to the streets to face the gangs that control the City and to save the people and places they love. Streamlined character and crew creation produces distinct, capable heroes with shared goals and bonds, while the versatile Clash system emphasizes the brutal, gritty street-fights in which these heroes will find themselves. The City itself is built collaboratively, with players working together to define the districts and neighbourhoods for which their heroes will go to war. 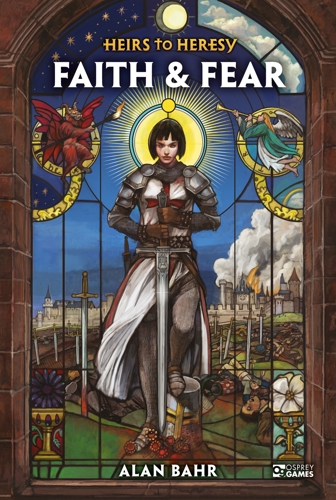 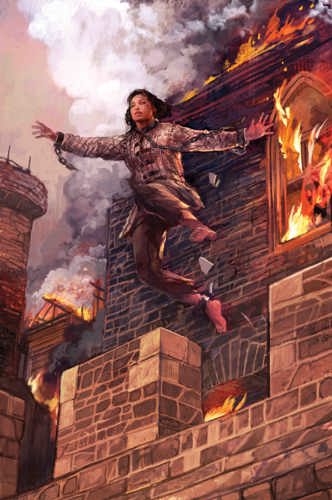 A supplement for Heirs to Heresy, introducing new knightly orders, mighty relics, mysteries, and foes both mortal and supernatural.

The shadow that hangs over Europe, already dark, is growing ever darker. Branded a heretic and turned fugitive, you are on the run. Your enemies are many, your friends few… and trust scarce. The knightly orders with whom you once fought side-by-side – the Hospitallers, Teutonics, and others – are potential allies but, having witnessed your cruel fate, do they still keep faith with the Templars or have they fallen to doubt and fear?

Heirs to Heresy: Faith & Fear is a supplement for the roleplaying game of the fall of the Knights Templar that unfolds like the labyrinthine Templar conspiracies themselves. Previously unknown foes stalk city streets and forest paths alike, while unexpected allies come to the fore in the form of new knightly orders. Ancient relics and new mysteries abound, allowing players to dive more deeply into this dark, mythic Europe, while rules for strongholds and spy networks present them with opportunities to exploit or challenges to overcome. 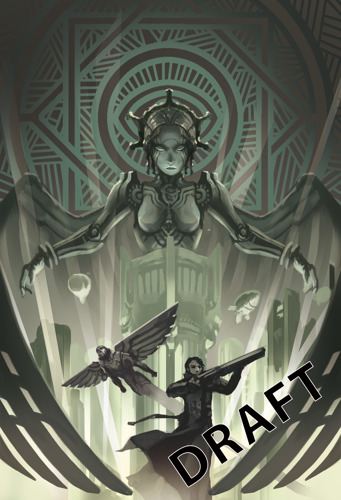 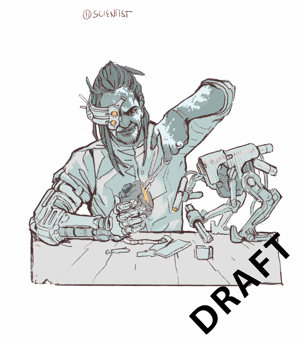 "It's 1984 - the height of the jazz age, art deco movement and mad science. Broken veterans of the Long War rub shoulders with two-bit gangsters and greedy pattern weavers, while Mother watches all through the eyes of Her legion of automatons. In Tomorrow City, the streets are filled with danger and opportunity in equal measure."
- Nathan Russell

A dieselpunk roleplaying game of action, mystery and mad science!

Tomorrow City was one of the cities of the future, built to usher in a new age of prosperity, seizing upon scientific achievements at the dawn of the twentieth century. Then came the War. Radium-powered soldiers assembled, diesel-fuelled nightmares rolled off production lines, city fought city, and the world burned in atomic fire. We survived, barely. Tomorrow City still stands, an oil-stained beacon of hope, part-refuge, part-asylum. Beset by dangers from both within and without, a secret war now rages on its streets. Diesel-born monstrosities stalk the alleyways, air pirates strike from the wastelands, mad scientists continue their dark work, occultists manipulate the city’s strange geometry, and secret societies plot in the shadows.

Tomorrow City is a roleplaying game of dark science and dieselpunk action. Swift and simple character creation and an easy-to-learn dice pool system places the emphasis on unique personalities and the momentum of the plot. Join the Underground and fight the crime and corruption at the heart of the city. Sell your dieselpunk tech, occult knowledge, and sheer grit as troubleshooters for mysterious paymasters. Hunt down spies, saboteurs, and science-run-amok. As weary sky rangers, fringe scientists, and radium-powered veterans, you might be all that stands between a better tomorrow and no tomorrow at all. 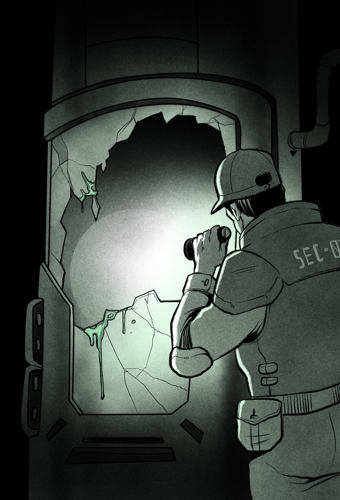 A science fiction roleplaying game of bringing law and order to the dark corners of the universe.

Attention! Stop your yappin’! I’m not in the habit of repeating myself so if you have any issues with any of this then wind it back afterwards and rewatch it in your own time. Any questions can be left until I’m done, and only then. Do you get me? I SAID DO YOU GET ME? At ease. Take a chair. Welcome to your first orientation session of the SOS, the Special Operations Squads. You’ve been chosen because some damn fool thought you’d be good at this. We’ll see. This is a military-backed department, but it doesn’t matter where you’re from – navy, police, private contractor. What does matter is where you go from here. Either to the stars to represent the government, or to the brig. Either is fine with me.
– SOS Orientation Briefing

Pressure: Industrial Science Fiction Roleplaying is a rules-light, story-focused game of venturing out and facing whatever is lurking in the shadows of humanity’s fragile and claustrophobic existence among the stars. As members of Special Operations Squads, players are highly skilled agents tasked with cleaning up after the Corporations, be that investigating connections to organised crime, neutralizing rogue weapons research, negotiating with rebel leaders on far-flung stations, or hunting down whatever that black-budget excavation team ‘awoke’ out in the Procyon Sector. An entirely standalone title, Pressure also develops and expands upon the mechanics and setting introduced in the Those Dark Places roleplaying game.

That's all for now, but we can't wait to share more of these worlds with you closer to the time.
Which are you most excited for? Let us know in the comments!

And roleplaying games aren't the only hot new announcement we have in store for you.
Check in on our blog and social media channels this time next week, Wednesday 25th -
and sign up to our newsletter to be the first to hear.
Watch this space...