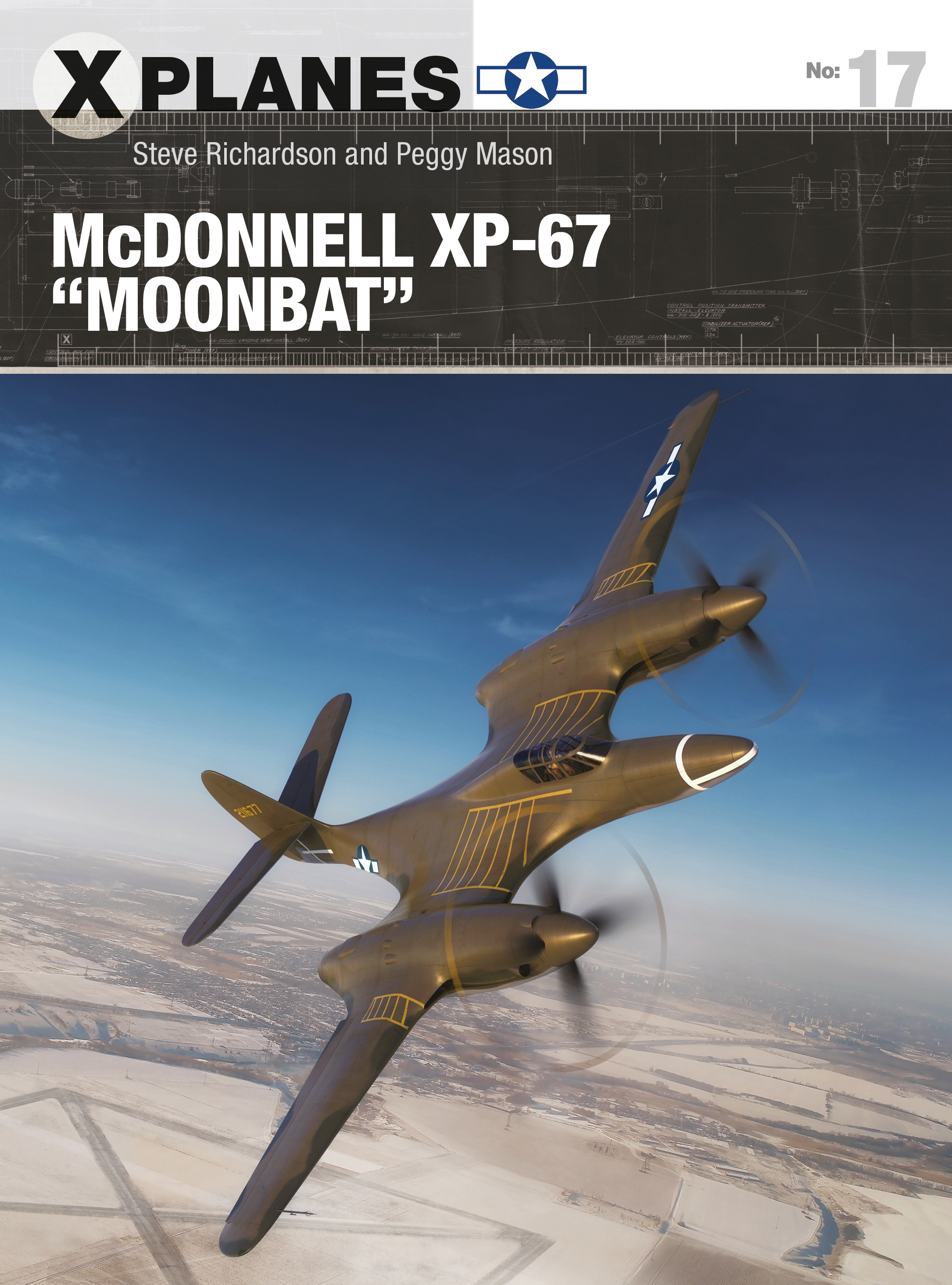 X-planes of the World War II era have always been a subject of particular interest among aviation enthusiasts, and a great deal has been published about some of them. But one of the most instantly recognizable ones, thanks to its unique and futuristic configuration, has never had a book written about it. It’s been largely shrouded in mystery, the stuff of legends, due to a sheer lack of documentation. That aircraft is the first one every constructed by the McDonnell Aircraft Corporation: XP-67, popularly though incorrectly, known as “Moonbat.”

Very little about XP-67 is contained in the historical archives at Boeing, which merged with McDonnell Douglas in 1997. A few photos, a couple of videos, and not much else. We thought that for such a historic aircraft, there must be more somewhere. The National Archives and Records Administration has a few blueprints and reports. The Air Force Museum has a few photos, and a few more have been published over the years, along with some speculative 3-view drawings that don’t agree with one another. Added all together, though, it was clear why there had never been a book about XP-67; there was simply not enough information to do a credible job.

But we couldn’t get the idea out of our heads that there must be more information somewhere. Peggy made a trip to the NARA in 2018 to explore what they had and get some sample imagery. We had also found NASA materials, historical archives from wind tunnel testing by predecessor NACA of a full-scale XP-67 engine nacelle which led to major configuration changes to improve cooling and reduce drag. There were many high-resolution photos of that test article and the changes that were explored with it, in the online collection of historical images. Then one day they all disappeared along with every other bit of the historical collection, replaced with a note that NASA was reviewing the materials; ultimately even that note would vanish, and that vast historical repository is now gone. Luckily, we had downloaded the XP-67 photos, and so we were able to trace the evolution of the aircraft’s major airframe changes. In 2020, when we were beginning to write this book for Osprey, COVID hit and suddenly NARA was unavailable to us. Their shutdown lasted throughout the period when the writing had to be completed and wasn’t lifted until after the deadline for submission of the manuscript – truly bad timing!

But we had also decided to approach XP-67 from an unconventional direction, via genealogy. We knew who the major figures were at McDonnell after the company was first formed, and we started looking for their descendants. We were much more successful than we had hoped to be, and found a treasure trove of blueprints and pencil sketches showing the evolution of XP-67 from its earliest Model 1 origins through Models 2 and 2A, with design variant ideas that were considered and either discarded or adopted along the way. We also found a blueprint of XP-67’s Continental I-1430 engine, which in itself turned out to have a fascinating backstory.

While gathering these materials, we also contacted the head of the local aviation museum to see if they could help. Through him we were able to obtain a huge number of never-published photos of XP-67 from a private collector, showing its construction, ground and flight testing, and final demise. At last we felt that we had enough for a book, and Osprey agreed to publish it as part of their X-Plane series.

Pulling everything together on a timeline proved to be a real challenge, since most of the photos that we’d uncovered weren’t dated. That forced us to look at obvious things, like establishing the time of year for particular photos by looking at whether or not trees in the background had leaves, but also made us very aware of subtle configuration differences in XP-67 over time. Things that weren’t on the aircraft when it did its initial ground testing were added before its first flight; things that weren’t there on that flight appeared subsequently. Major changes happened after the first four flights, and then another round of changes was made just before XP-67’s final few flights. To our knowledge, capturing these configuration changes in detail has never been done before, so we were eager to show them in our book. And Osprey had just the right vehicle for doing that, in a series of color profile illustrations by one of the very top aviation artists or our time, Adam Tooby.

Adam also did the cover artwork showing XP-67’s first flight on January 6, 1944 over a wintry Scott Field in Illinois, as well as a color illustration of the aircraft’s cockpit which was much trickier than we had initially expected. Our years-long research showed that like the exterior features, XP-67’s cockpit also underwent significant remodeling during its short lifetime. And if photo coverage of the aircraft had been sparse over the years, the cockpit was even less documented, and the half-dozen photos that have surfaced weren’t showing us the same things. Instruments and controls had been changed and relocated multiple times, and it became a real challenge to figure out where on the timeline the modifications had occurred. And finally, Adam created two marvelous color illustrations showing P-67s in combat as both fighters and photo reconnaissance aircraft, if XP-67 had ultimately succeeded and gone into production. The configurations represented in that artwork were taken from actual McDonnell drawings that showed mixed piston and jet engine propulsion, a concept that enjoyed a brief vogue in the mid-1940s before jet aircraft became the norm.

As part of our journey, we found ourselves being led into a whole other area of research involving the history of Lambert International Airport as it’s known today. The airport is actually short on reference materials about its own history, but we were able to work backward to find out where the runways were located in 1944. We combined that with the clues in the XP-67’s accident report and the photos of the aircraft after the fire that consumed it was put out, and we carefully correlated everything with maps of the current runways to find the exact spot where XP-67 met its fate. We were also able to pinpoint the locations of the original airport buildings, including McDonnell’s production and engineering buildings. Armed with this information, we approached the airport’s management and were able to get permission to enter the perimeter with the appropriate escort. On a terribly frigid November day in 2021 we stood on the spots where the XP-67 was born and where it died.

So, the making of this book not only fills a longstanding need for information on XP-67, but it became a whole series of very personal quests by the authors to fill in a wide variety of previously blank spaces in local history. It’s been amazing and enlightening for us, and we hope the book will evoke similar feelings from readers!