On the blog today, author Martin Pegler delves into the beginnings of snipers in the British Army. 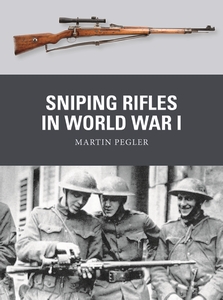 Accepting an event or situation as ‘normal’ is seldom a rapid process. Where attitudes need to change, it often happens over a generation or more, and many ideas and prejudices are so deeply rooted that even then, there is a strong possibility that public perception of things remain largely unchanged.

This was very much the case with the military and the rather touchy subject of their employment of sharpshooters, or snipers. Although the practice of using good rifle shots to target specific enemy soldiers was not a new one – it was recorded in the English Civil War 1642–51) – it was sporadic and frequently ineffective due to the inaccuracy of early muskets. There were certainly more riflemen used by both sides in the years of the American Revolutionary War (1775–83) for the rifled musket was a far more common arm in the Americas during this period than it was in Europe, and although the majority of riflemen were irregulars they often inflicted such large numbers of casualties on the British soldiers that orders were given to accept no surrender, a practice that has, incidentally, continued to this day.

It began in a small way, as things usually do, when the British Army raised the Experimental Corps of Riflemen. Two regiments of riflemen, the 60th and 95th regiments of Foot, were armed for the first time with the very effective – albeit expensive – Baker rifle, which could be used to good effect at ranges in excess of 300 yards, and they wore practical green uniforms that did not stand out like the proverbial sore thumb in the local surroundings. Even the more conservative generals were forced to admit, after 1815, that the Rifles were able to inflict damage and instil fear in the ranks of the enemy far beyond that which would be expected of such comparatively small units. So it was almost inevitable that before long, advances in material technology made possible the cost-effective and more widespread production of the rifled barrel during the first half of the 19th century. The British Army’s adoption of the Pattern 1853 Enfield rifled musket and other world armies’ espousal of similar models changed the face of the battlefield forever, although it must be said that it took an inordinately long time for this rather important fact to be recognized.

For the first time in history, the unassailable king of the battlefield, the artillery, was within range of aimed small-arms fire from capable riflemen at ranges of up to 1000 yards. A small taste of this was experienced by Russian forces in the Crimean War (1853–56), who were forced to keep the embrasures of their artillery positions closed against the accurate fire from Pattern 1853-armed British sharpshooters. If this lesson was overlooked at the time, it would shortly be reinforced by the outbreak of the American Civil War (1861–65). This conflict drew military observers from all over Europe, who took copious notes concerning the manner in which battles were conducted and the likely causes of why they were won or lost. However, what was soon very clear was that the officially raised regiments of sharpshooters, employed on both sides, proved a fundamentally important part of how the war was fought. Aside from their ability to stop a cavalry charge quite literally in its tracks, it was noted that the riflemen took a huge toll on senior officers, including generals. While this was regarded as highly unsporting by British commentators – officers being members of the upper class and quite unsuitable as targets for common soldiery – the Americans held no such class distinctions, and certainly had no qualms. It became – at least militarily if not socially – acceptable for a man of rank to be shot by any soldier capable of doing so. This was the first chink in the armour of invincibility that had previously been worn by officers and was to become a major factor in waging war in the world’s biggest and bloodiest conflict to date.

When World War I broke out in August 1914, the only combatant countries that had prepared for sniping were Germany and to a lesser extent, Austria–Hungary. German authorities had been ordered to requisition all suitably chambered sporting rifles to be issued to the Army, while simultaneously beginning to manufacture their own sniping rifle, based on the Mauser Gewehr 98 and equipped with a variety of commercial-pattern scopes and mounts. In the first few months of the war, none of the Allied armies took much notice of the unnaturally high levels of casualties inflicted on men living in their makeshift trenches. The fact that some 75 per cent were due to head shots was merely attributed to skilled shooting. But as the war ground to a stalemate, trenches became permanent residences and the casualties mounted, it became apparent that an orchestrated and deliberate means of alternative warfare was being waged. This was reinforced by the capture of increasing numbers of German rifles equipped with telescopic sights. These were not pressed-into-service hunting weapons, but factory-manufactured service rifles of high quality. The realisation began to dawn on the British that they were facing a new form of warfare, to which they had virtually no means of defence or retaliation. The coincidental issue of steel helmets in spring 1915 helped hugely, it was estimated that the number of head wounds dropped by 80 per cent (although this figure includes injuries from shrapnel and shell splinters), but this served only to ameliorate the effects, not solve the problem.

While hunting was a distinguished and long-established tradition in Germany, in Britain it was the preserve of the upper classes and the rich, so only a few officers or men were available with the experience to provide the Army with ideas as to how the sniping menace could be tackled. Fortunately, there were enough men who had either been big-game hunters or, more numerously, Bisley target shooters, who were able to staff makeshift training camps to pass on as much information and skill as was possible. There were luminaries such as Captain Hesketh Prichard, a hunter who believed passionately that Britain needed to set up sniping schools; it was due to him and a dozen or so other officers with both experience and contacts within the military establishment, that the first Schools of Sniping were set up. Everything required from blackboards to sandbags had to be begged, borrowed or occasionally removed when no-one was watching, but the biggest problem of all was the shortage of rifles and scopes.

It was wisely decided that any sniping rifle had to be based on the existing No. 1 Mk III Short Magazine Lee Enfield, but the huge optical industry that existed in Germany and Austria was sadly lacking in Britain. A few companies were making telescopes, gunsights and binoculars, but much of the special glass had to be imported and no single company existed that could fulfil the requirements of the British War Office. As a result, a number of companies were contracted to provide scopes, mounting systems or both that could be retrofitted to the SMLE. A baffling decision was taken that all of these rifles must have their scopes offset to the left, to permit the magazine to be charger-loaded, though to what end is a mystery. The answer most probably lay in the fact that the War Office staff simply failed to understand the function of a sniper and the fact that the last thing he was going to do was open rapid fire at 15 rounds a minute. Consequently, all British rifles suffered from the problem of a scope that was not in line with the axis of the barrel in the manner of the Mauser scopes, making loophole shooting very tricky. Still, the British and Commonwealth snipers supplied with the Enfield were nothing if not adaptable, and used these rifles to great effect. On the Allied side, only the Canadians, joined later in the war by some American units, had rifles with an in-line scope, the Warner & Swasey, and it was only in the month after the Armistice, in December 1918, that Britain finally approved a rifle with an over-bore scope, based rather ironically on an existing German pattern.

Although at the start of the World War I, it was considered by the British to be utterly unsporting to shoot a man more or less in cold blood, the unending toll of men who fell victim to a German sniper’s bullet hardened attitudes and requests for retaliation grew exponentially. It required a sniper to catch a sniper.

If you enjoyed today's blog post, you can find out more in Martin's new book Sniping Rifles in World War One. Available in all fomats on our website.