Author Mark Stille provides an overview of the reasons behind the outcome of the antisubmarine duel between USN submarines and the IJN’s escort force. 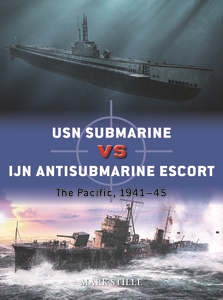 In the struggle between USN submarines and IJN escorts during the Pacific War, the campaign started poorly for the Americans. During the first 13 months of the war, USN submarines conducted some 350 war patrols. The war began with most submarines conducting defensive patrols, first around the Philippines, then the Netherlands East Indies, and later off Midway. In the first two instances, submarines were totally ineffective in the anti-invasion role. Confirmed sinkings of Japanese ships were few.

Dispersal of effort was a major reason why USN submarines were generally ineffective through 1942. Submarines were dispatched on myriad types of missions, including chasing after high-value IJN targets based on Ultra decrypts, minelaying, reconnaissance, supply runs, personnel evacuation, and even an amphibious raid on Makin in the Gilbert Islands in August – all of which took the boats off more suitable and successful missions. Major efforts were made to “blockade” Truk and the Solomons in support of the Guadalcanal campaign. Since these areas were heavily patrolled by the IJN, successes were relatively few.

The most successful mission type, and a portent of things to come, was shipping interdiction in Japanese home waters or the East China Sea. The Luzon Strait was a particularly lucrative area since virtually all Japanese shipping coming from the resource areas of Southeast Asia to Japan had to pass through it. The 54 shipping interdiction missions accounted for 81 confirmed sinkings – almost half of all Japanese losses.

In the tonnage war, 1942 was a lost year. Post-war Japanese records indicate that 180 ships were lost during this period for a total of 725,000 tons. During the year, the total available Japanese merchant tonnage (freighters and tankers combined) declined by a mere 89,000 tons. This result was even better than the IJN’s incredibly optimistic pre-war predictions.

There were many reasons for this failure. The primary one was the dispersal of effort already mentioned. Another one was the most obvious – the problems with the Mark 14 torpedo. This problem continued into 1943 since the issues surrounding the exploders had not even been addressed, but the problem with the torpedoes running too deep had been exposed and corrected. The final major issue was the poor performance of the submarine captains.

The lethality of the USN’s submarine force greatly increased in 1943. The SJ radar was in full service, the quality of Ultra intelligence was better, the issues with the Mark 14 were being resolved, and many ineffective skippers had been weeded out. Tactics were also evolving with the first tentative use of wolf packs late in the year. In addition, boats were sent to areas where the prospects for success were greater. Better deployment tactics also helped: in 1943, about 50 percent of boats went to Japanese home waters and the East China Sea as opposed to 15 percent the previous year.

The bottom line was that sinkings rose to 335 ships for a total of 1.5 million tons. This began to impact imports to support the Japanese war economy. In 1943, 16.4 million tons of bulk commodities arrived in Japan compared to 19.4 in 1942. Sinkings were now greater than the capacities of Japanese shipyards to replace them. Overall shipping tonnage decreased from 5.2 million to 4.1 million. Japanese ASW efforts were also more effective in 1943, at least based on the number of USN submarine losses. A total of 15 were lost during the year.

The year 1944 provided a full display of the destructive potential of USN submarines. It is no understatement that despite the best efforts of IJN ASW forces, the shipping war in the Pacific was decided in 1944. The expanding USN submarine force, using advanced bases at Biak and the Marianas, conducted 520 patrols in 1944. By focusing on the Luzon Strait chokepoint, submarines strangled trade from Southeast Asia to Japan.

Post-war analysis confirmed the loss of 603 Japanese ships for a total of some 2.7 million tons. By the end of the year, the Japanese merchant fleet was reduced to about 2 million tons; available tanker tonnage was reduced to 869,000 tons. Those ships remaining were no longer free to conduct normal commerce or support to the Japanese military since they were forced to spend 1945 in confined waters or hugging the coast to avoid submarine attack. The result of this precipitous decline in shipping was that imports of commodities essential to the Japanese war economy went from 16.4 million tons in 1943 to some 10 million tons in 1944. This meant crippling shortages in Japan. Most disastrous was the near total stop in oil shipments. In 1945, it was increasingly difficult for submarines to find targets. When hostilities ended, Japan had lost 88 percent of its merchant fleet and was left with only 650,000 tons of shipping.

In addition to the toll on Japanese shipping, USN submarines also conducted effective attacks on the IJN itself while rendering important assistance to USN operations. During 1944, USN submarines accounted for seven carriers, one battleship, nine cruisers, and 30 destroyers.

IJN ASW forces were swamped by this assault. As Japanese convoys were ravaged, their escorts were powerless to intervene. Ineffective as escorts, IJN escorts were reduced to being rescue ships. While total USN submarine losses rose during the year to 19, few were at the hands of IJN escorts.

Despite the losses suffered by the USN’s submarine force, the IJN’s overall ASW effort during the Pacific War can be described as ineffective. One of the main explanations was a lack of escorts. After a late start, the IJN was able to get 173 kaibokan (escorts) into service. However, many entered service too late to have an impact. Overall, the kaibokan comprised a mediocre ASW platform. Their lack of speed and effective weaponry made them ineffective submarine hunters, and by 1944 they were also demonstrating that their inferior antiaircraft capabilities made it difficult for them to operate in areas increasingly dominated by US airpower. The early kaibokan designs were unsuited for mass production, which meant most arrived too late. IJN escorts with their rudimentary sensors and ineffective weapons, manned by inferior crews, proved unable to deal with USN submarines, which were equipped with world-case sensors and reliable weapons, commanded by aggressive officers, and supplied with excellent intelligence on the movements of Japanese convoys. The accompanying table illustrates the heavy losses suffered by IJN ASW escorts.

In return for the destruction of Japanese trade and the massacre of IJN ASW escorts, the USN lost a total of 52 submarines during war, all but two in the Pacific. Breaking this down by cause, which remains difficult even to the present day due to lack of information and conflicting sources, shows the relative ineffectiveness of IJN ASW forces.

Of the 52 subs lost, a maximum of 43 were lost to Japanese forces. The principal causes, where known, are listed in the table below. The eight boats lost to unknown causes were all likely lost to mines or to other Japanese forces, but the exact reason remains unclear. Sixteen were lost to IJN surface forces, with destroyers accounting for the most and kaibokan only five. Mines were the single greatest cause of loss, and the total shown here does not reflect the additional boats lost to mines but shown as unknown.

Losses of USN Submarines by Principal Cause

'USN Submarine vs IJN Antisubmarine Escort, The Pacific 1941-45 can be purchased on our website!