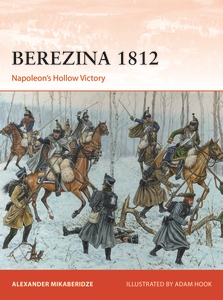 History is full of dramatic episodes, probably none more so than the crossing of the Berezina River in November 1812 by Napoleon’s Grande Armée. Five months earlier Napoleon had invaded Russia in an attempt to (forcefully) resolve his growing disagreements with Czar Alexander. Mobilizing some 600,000 men, he marched all the way to Moscow without ever managing to deliver a knockout blow to his elusive enemy. The Russian historic capital fell (and burned) in September but the Russians remained defiant, rebuffing Napoleon’s offers to negotiate. Such obduracy, along with critical shortages of supplies and men, forced the French emperor to begin the infamous retreat in October. Ill fed, inadequately clothed, and progressively demoralized, the Grande Armée suffered horribly from incessant Russian attacks and from the onslaught of cold weather. By November, its remnants approached the shores of the Berezina, a small river in present-day Belarus, where the Russians planned to surround and annihilate Napoleon’s forces.

By skill and good fortune, and through his opponent’s mistakes, Napoleon escaped this trap, but the tragic passage cost his army thousands of lives. It is hard to find another example in military history where an army in such desperate circumstances, surrounded by the enemy on almost all sides, and pressed against a river, had extricated itself as deftly and heroically. Those who survived the horrors of the crossing both shuddered at memories of what they had been through, and marvelled at what they had accomplished. General Pierre Berthezène felt that ‘the crossing of the Berezina, in the face of and in between enemy armies’, was a most ‘remarkable military operation’ that added ‘new shade of glory to the army’. Baron Henri de Jomini agreed, commenting that ‘never was an army in a more desperate condition, and never was one extricated more gloriously and skillfully’.

As the years passed and participants began to write their memoirs, the passage emerged as a symbol of endurance, perseverance, and sacrifice. Who amongst us can contemplate unmoved the tragic spectacle of Dutch, Polish, and French pontonniers and sappers, deep in the icy water, building the bridges and dying so the remnants of the once mightiest army in Europe could escape? Or the dramatic scenes of the Swiss soldiers singing Unser Leben gleicht der Reise as they marched through the snow-covered fields to confront the enemy and gain more time for the survivors to cross over? As one contemporary put it, ‘the genius of desolation hovered everywhere around. Here they passed their dreadful nights, a prey to hunger, misery, and cold, their only canopy the leafless tree, their only lullaby the drifting snow that rocked them to their wretched sleep.’[1]

The events on the Berezina inspired writers and poets to pick up their stylus. Victor Hugo evoked the images of the retreat in his famous Châtiments, while Anne Bignan, Lydia Huntley Sigourney, Patrick Rambaud, and others created poignant literary accounts that have stood the test of time. More crucially, Honoré de Balzac, the French literary giant, devoted one of his best short novels to the crossing of Berezina and helped create a new genre of historical realism that combined the historicity of Walter Scott and James Fenimor Cooper ‘with in addition a passion and verve due to neither of them’.[2]

His novel Adieu (1830) opens with a scene in the French countryside four years into the Second Bourbon Restoration following Napoleon’s defeat at Waterloo in 1815. Philippe de Sucy, a former colonel of the Grande Armée, had just returned from Russia where he was captured during Napoleon’s invasion in 1812. Longing for normalcy of life after years of captivity, de Sucy goes hunting with his friend. In the process, the two men come upon a dilapidated monastery where they see a seemingly insane woman roaming in the park and endlessly repeating the same word – ‘Adieu’. Taking a closer look at her, Philippe is stunned to discover that she is, in fact, his long-lost mistress, Countess Stéphanie de Vandières. Meeting the woman’s uncle, de Sucy learns that she had ‘lost her mind’ during the crossing of the Berezina. On the third day of the crossing, Napoleon had ordered the bridges burnt to prevent the Russians from pursuing his retreating army, but his decision had stranded a large portion of freezing and starving stragglers on the far bank. Just as the bridges went up in flames, Philippe de Sucy arrived at the icy shoreline of the Berezina, dragging his lover Stéphanie and her husband, both barely alive from the long and difficult journey. With only two places remaining on the last raft to be launched across the river, Philippe gallantly surrenders his spot to his mistress. Standing on the raft, Stephanie – feeling torn in having to choose between the man she is married to and the man she loves – shouts an ‘Adieu’ to her lover; but just then her husband slips on the raft and falls into the river, where huge blocks of ice decapitate him. The horrible scene shocks the countess to the core of her being, and makes her ‘lose her mind’. She survives the retreat from Russia, but becomes the soldiers’ ‘plaything’ and ends up at a hospital in Strasbourg, where her uncle finds her by chance. From that moment, she is reduced to a catatonic state, unaware of her surroundings and constantly uttering the same word, ‘Adieu’.

The final part of the short story deals with de Sucy’s attempts to save his former lover and find a way to restore her sanity. When everything else fails, he resorts to the most drastic of measures, a ‘grande illusion’. At huge expense he transforms his estate into an exact replica of the Berezina crossing at the moment of their separation, hoping that reliving this dreadful experience will jolt Stéphanie back to reason. In January 1820, as the snow covers the countryside just as it did in the tragic November days eight years earlier, complete with abandoned and overturned carriages, smoke, detritus, and men dressed like soldiers anxiously shuffling around, De Sucy brings the countess, blindfolded, to his estate. Her covering removed, the woman stares in horror at the scene of carnage, which momentarily shocks her back to sanity. She recognizes Philippe and embraces him, but the effect of reliving the catastrophe proves overwhelming and she dies with the name of her lover and the final ‘Adieu on her lips. The novel ends with Philippe committing a suicide.

Adieu, though rarely read nowadays, represents a moment of Balzac’s transition from earlier Romanticism-tinged works to the realist fiction that eventually formed his masterpiece La Comédie Humaine. Its graphic images of violence, horror, death, and suffering brought a remarkable sense of realism and drama to a literary narrative. In writing this novel, Balzac sought to challenge the growing romanticization of the Napoleonic past and the longing for military grandeur in French society, especially after the fall of the Bourbon monarchy in July 1830; over two dozen news plays about Napoleon and the empire opened in Paris in the months after the July Revolution, offering a rose-tinted view of recent history. The public adored them, but Balzac refused to be carried away, complaining about ‘these Napoleonized representations prostituting the emperor’s memory’ and selling history in ‘order to give one and all a peace of the great man in small change’.[3] He feared such uncritical representations ignored the complexity of human suffering, contributed to mythmaking, and cheapened the past itself. To counter it, Balzac used the crossing of the Berezina to call into question the popular forms of historical representation, and challenge the conventional accounts of the Napoleonic epic that tended to mythologize or idealize. As French critic Pierre Gascar pointed out, with his striking description of the soldiers of the Grande Armée – tired, emaciated, cold, and meandering towards the frozen river where so many of them found their end – Balzac attacked the myth of military grandeur and called for a new mode of writing about history, grounded not in myth but in reality.

Maurice Samuels, The Spectacular Past: Popular History and the Novel in the Nineteenth Century (Ithaca, NY: Cornell University Press, 2004)

[3] Cited in Maurice Samuels, The Spectacular Past: Popular History and the Novel in the Nineteenth Century (Ithaca, NY: Cornell University Press, 2004), p. 215.