On the blog today, author Michael Napier introducces us to his recent series title 'RAF Tornado Units in Combat 1992-2019.' 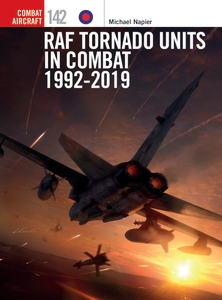 The Tornado, the longest serving combat aircraft in the history of the RAF, spent 37 years equipping the front-line of the RAF, participating in continuous combat operations for nearly 30 years. Conceived at the height of the Cold War in the 1970s as the Multi-Role Combat Aircraft (MRCA), Tornado entered RAF service in the mid 1980s in two versions, an all-weather low-level strike/interdiction aircraft (the Tornado GR1) and an all-weather long-range interceptor (the Tornado F3). By the end of the Cold War in 1990, the type equipped 11 strike/attack squadrons (of which eight were based in Germany) and seven air defence squadrons. However, the fall of the Berlin Wall was followed by the First Gulf War, in which both versions of the Tornado saw action using tactics that had not been foreseen during days of the Cold War. The Gulf War marked a paradigm shift in RAF operations: instead of fighting from prepared positions in Europe, over the next 28 years, the Tornado ground attack and air defence forces found themselves involved in expeditionary warfare across the Balkans, the Middle East and North Africa. It says much about the aircraft that it spent over three-quarters of its front-line service involved in active operations, carrying out roles for which it was not originally intended. In short, the Tornado truly was a Multi-Role Combat Aircraft.

Following on from my book RAF Tornado Units of Gulf War I, this book describes all the operational deployments undertaken by the Tornado Force since the Gulf War in 1991. These include operations over Iraq (1992–2009 and 2014–19), Bosnia (1993–96), Kosovo (1999), the Falklands (1992–2009), Libya (2011) and Afghanistan (2009–14). As an ex-Tornado pilot myself, with experience of flying missions over Iraq, I have a unique knowledge of the aircraft, its systems and the people who operated it. Thoroughly researched, with original material thanks to privileged access to the records and memoirs of many Tornado aircrews, this book is the most comprehensive account of RAF Tornado operations from 1991 to 2019: as well as giving a detailed factual history of each operation, it includes first-hand accounts of those who took part, giving a unique insight into what it was like to fly and fight with the Tornado and how the role of the aircraft evolved continuously through the many campaigns. The book charts how modifications to the Tornado F3 turned it into one of the most capable interceptors in the world and how the Tornado GR1 evolved from a long-range interdictor carrying out strikes deep in enemy territory into the Tornado GR4, working intimately with ground troops in contact with enemy forces, as a Close Air Support platform.

Beginning with Operations Jural and Ingleton flown by the Tornado GR1 over Iraq in 1992/3, which I experienced at first hand, the book describes the unfolding situation over Iraq as armed intervention gradually escalated through the sequence of Operations (Driver (1994), Warden (1995–9), Bolton (1997), Desert Fox (1998). Meanwhile, the Tornado F3 had taken responsibility for both UK air defence operations and the air defence of the Falkland Islands (1992–2009), and the book continues with details of the type’s contribution to Operation Deny Flight (1993–96) over Bosnia andHerzegovina, Resinate (1999–2003) and Telic (2003) over Iraq and lastly the NATO Baltic Air Policing mission, Operation Solstice (2004–05) at Šiauliai air base in Lithuania. The last operation carried out by the Tornado GR1 was Operation Engadine (1999), the long-range bombing sorties mounted from RAF Brüggen in Germany against Serbian forces in Serbia and Kosovo. The aircraft were subsequently upgraded to become the Tornado GR4. By 2000, the strike/attack assets allocated to Operation Resinate were Tornado GR4s, which, like the Tornado F3s, went on to participate in Operation Telic (2003–09). In 2009, the Tornado GR4 force left Iraq to take on responsibility for providing Close Air Support for Operation Herrick (2009–14) over Afghanistan, although they also played a more conventional deep strike role in Operation Ellamy over Libya in 2011. The final operation by the Tornado Force was Operation Shader (2014–19) over Iraq and Syria, after which the Tornado was withdrawn from RAF service.

RAF Tornado Units in Combat 1992–201 contains many previously unpublished images, including numerous air-to-air photographs taken by crews during operational sorties. In addition, 30 very detailed colour profiles by artist Janusz Światłoń depict Tornado GR1s, F3s and GR4s in the various colour schemes worn and stores configurations used on combat missions, including various examples of “nose art” from the Second Gulf War. The cover artwork by Gareth Hector was painted following the description given by Sqn Ldr Kev Rumens of an early morning bombing mission that was flown on 21 March 2003 during the Second Gulf War; after seeing the artwork Rumens commented “I can’t believe how the artist has taken a written description and produced something so uncannily accurate to the real thing.”

The book is availble to purchase on our website here