On the blog today, author Michael Claringbould explores the false mystique surrounding the history of the Corsair for his recent title 'F4U Corsair versus A6M Zero-sen', 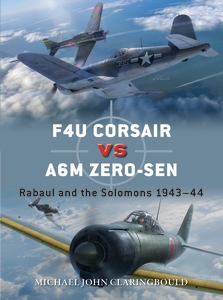 When I started researching sections of the 1943 Solomons air war back in 2017 it became glaringly obvious that many combat claims made from both sides verged on fiction. It seemed to me that the Corsair’s proclaimed extraordinarily high kill advantage against its nemesis – the Zero fighter – might not be as generous as most publications claim. This purported favorable ratio, credited to technological superiority, appears in some publications to be as high as eleven to one! I decided to dig deeper, but the level of discrepancy surprised even me.

First, I laid out the histories of all 673 Corsairs which served in the theater, and then similarly listed every Zero combat loss from Japanese unit records. When I selected the combats in which Zeros and Corsairs fought each other exclusively, a combat kill ratio of one-on-one became apparent. How was this so when the Corsair was allegedly so technologically superior? This was an interesting story to explore, and my proposal to Osprey in 2020 for a Duel series focusing on the first year of the Corsair’s service in the Solomons was readily accepted.

Surprisingly, much of the explanation is due to the fact that the Corsair’s technical superiority costed it dearly; its differentiated hydraulics interwoven with complex control, electrical, and ancillary systems gave fits to field maintenance. Combined with its temperamental engine, more Corsairs were lost to operational or mechanical misfortune than to aerial combat, a situation barely acknowledged in most histories.

However, other historical inconsistencies soon materialized. Oddly, most USMC Corsair Squadrons which fought in the key Solomons theater have received scant recognition for doing so. A selection of Corsair histories gives the distinct impression that VMF-214 “Black Sheep” and VF-17 “Jolly Rogers” were the mainstay Corsair players, but this is not the case. Then, American Corsair units are given capacious coverage of their participation in the 1944 and 1945 Philippines and Japan campaigns. These latter actions were largely aerial trench warfare, which in general saw comparatively less aerial action than the Solomons, and which have limited human interest.

More falsehoods soon became apparent too; the history of the Corsair is lopsided by false mystique, none more so than the claim it was nicknamed “Whistling Death” by harried Japanese. The relentless reiteration of this claim has somehow acquired the status of fact. However, the Japanese equivalent exists nowhere in Japanese literature, war-time records or even POW interrogations. The moniker was in fact concocted by Vought’s publicity department, and has been misattributed ever since.

The myth of the alleged outstanding Corsair score ratio has gained historical traction because Western historians continue to accept US combat claims at face value instead of consulting the meticulous Japanese unit records which are illuminating and detailed. This is partially excusable as the language barrier is immense, and the surfeit of different Japanese aircraft units and commands makes it challenging to align individual combats unless one knows where to look. To add to the confusion, Allied command structures rarely coordinated combat results at unit level, in a contest where combat scores were sources of spirited competition and coveted morale. Neither were other competing claims such as those made by AA, given serious attention. Therein lie other reasons behind the perception of the Corsair’s inflated combat success.

Nonetheless, the Corsair was a revolutionary fighter as its performance enabled it to take the fight to the enemy as opposed to the defensive role taken to date mostly by the smaller but heroic F4F Wildcat. The breadth of involvement by the Corsair in the theater is demonstrated by the eventual participation in the Solomons of one USN Squadron and 18 USMC Squadrons alongside numerous RNZAF combat and service units.

To balance the ledger, Japanese fighter pilots made more generous claims against the Corsair than their Allied counterparts. These increased as the war progressed, however, once the Zero took on its opponent at lower altitudes, a skilled pilot could run rings around the Corsair using superior  maneuverability. The more I dug into the Japanese records, the more I found the eccentricities of the Zero when deployed in this theater. A suite of hybrid modifications attended each model, the most ubiquitous of which pertain to the Model 52 series. These late models were omnipresent at Rabaul from October 1943 onwards, and attendant field modifications offer potential to confuse model numbers. Similarly, other similar engine/exhaust/ collector/ aerial/ spinner changes were made in the field, confusing the issue in some cases of determining the particular model of a Zero. There is the additional factor of armament modifications of which unfortunately scant detail survives. For example, Admiral Kusaka Junichi’s diary refers to 204 Kokutai’s weapons testing center not far from Vunakanau at which it unsuccessfully trialed, inter alia, the use of 30mm aerial canon.

There is an abundance of human interest in this theater. As the pincers closed on Rabaul, back in Japan a patriotic war song was composed titled ‘Souretsu! Okamoto Butai’ (Behold the Heroic Okamoto air unit) which glorified the heroic achievements of the Zeros of No. 253 Kokutai. This was led by Lieutenant-Commander Harutoshi Okamoto, the last Zero commander to defend Rabaul. It was this same officer who introduced the Zero to the theater with No. 4 Kokutai back in February 1942, and who now presided over the final days of the Zero at Rabaul. The importance of Okamoto and his contribution to the battle with new US types, including the Corsair, cannot be overstated. He was an original and key architect in the structure and tactics of IJNAF fighter operations in the Pacific. Okamoto’s Zeros had to defend Rabaul during its last stand, first by countering the October/November 1943 Rabaul campaigns by the Fifth Air Force and then later strikes by Solomons-based USN, USMC, and USAAF units, including Corsairs.

I am fortunate to have access to a unique and vast selection of Japanese language primary source material, including unit logs, diaries, and POW interrogations (not always truthful!). I am also fortunate in being able to align the right units and understand the old style of writing in Kanji which is so unique to the Imperial Japanese Navy of World War II. This hard-won knowledge has gifted a unique and different perspective to the Corsair/ Zero contest so many years ago.

If you want to learn more, the book is availabe in paperback and digital formats on our website here