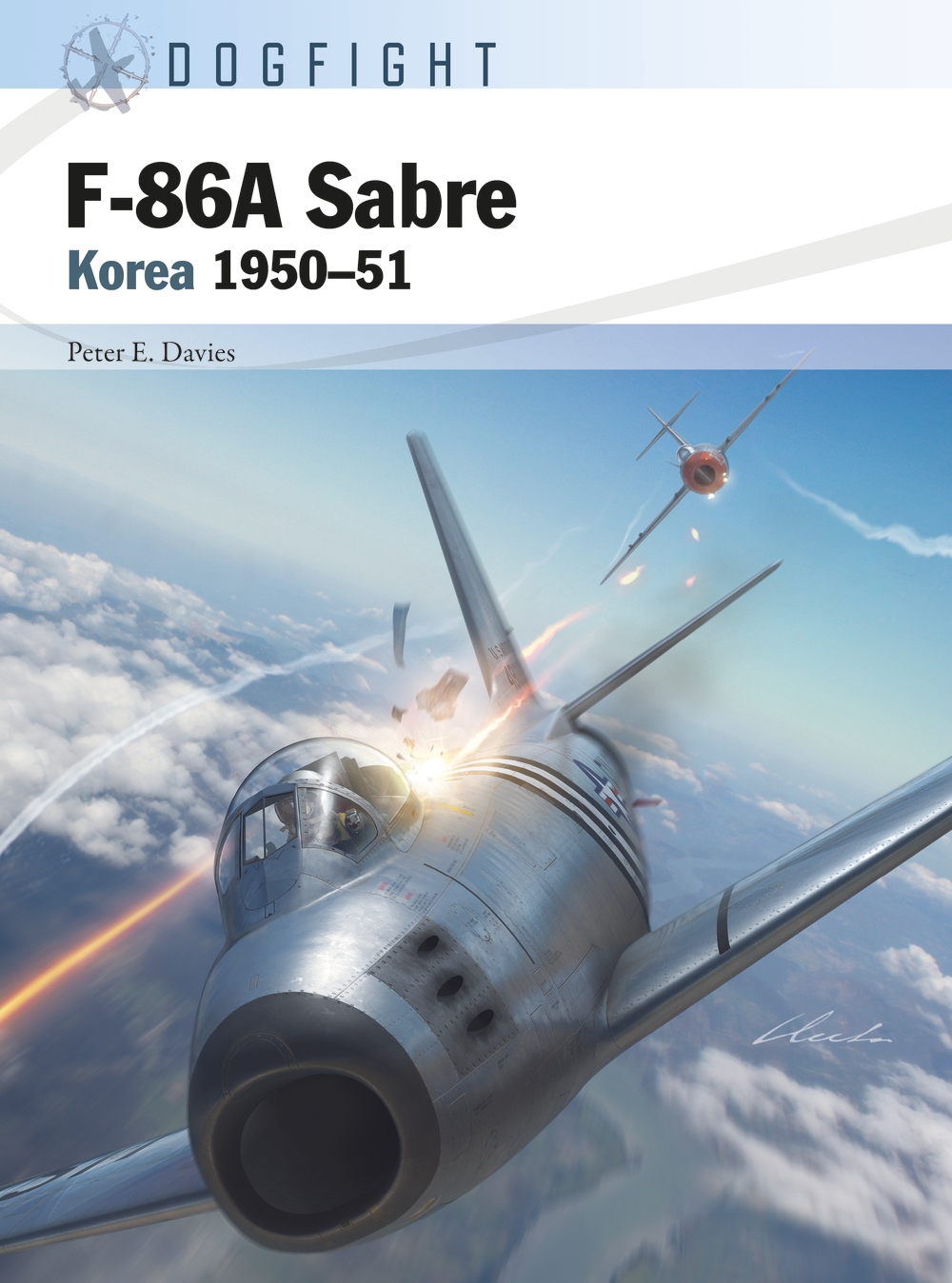 On the blog today, author Peter E. Davies gives us an insight into the experiences of Sabre pilots.

The F-86 Sabre is among a handful of truly outstanding fighters and will forever be considered as America’s first great jet fighter and arguably the most successful in terms of aerial victories. Anyone who watched the Golden Apple Trust’s very rare F-86A perform at UK air shows will have been impressed by its speed, agility, and that distinctive smoke trail. It was therefore a pleasure to be invited to contribute a book on its early combat career for Osprey’s exciting new Dogfight series. Working with expert artists Gareth Hector and Jim Laurier is always a privilege, but the series adds a new dimension with the intricate ribbon diagrams crafted by Tim Brown to show a variety of actual dogfights.

There are several books that give detailed analyses of the F-86’s development and structure and these aspects are certainly not side-lined in the new approach, but the real interest in this series is the focus on actually flying the jet in combat. The memories of pilots who took part in those high-speed battles in the fighter’s first year of combat were crucial in this endeavor. They took the recently introduced Sabre into combat in an ongoing aerial struggle that would endure for three years and make history as the first jet-vs-jet conflict.

After four months of air superiority for the USAF’s 5th Air Force against a small number of Soviet-supplied, piston-engined North Korean warplanes, an F-51D Mustang’s gun camera film in November 1950 showed a swept-wing jet fighter that was virtually unknown to Allied forces. Later that month these fighters, identified as MiG-15s, attacked a B-29 Superfortress formation over a North Korean airbase, rapidly outdistancing the Lockheed F-80 escorts. Although the F-80 was also jet powered, clearly a better fighter was needed to protect US aircraft from these Soviet aggressors. Anti-aircraft fire claimed a B-29 on July 12 but it was the first loss to a MiG-15, on November 10, 1950, that triggered the decision to deploy F-86A Sabres to Korea.

Fortunately, in December 1950 the 4th Fighter Interceptor Group’s three F-86A squadrons, commanded by Col George F. Smith, were principal components in mainland USA’s Air Defense Command. General Hoyt Vandenberg, Air Force Chief of Staff, realizing the MiG-15 was a serious threat, responded to the urgent request from Lt Gen George E. Stratemeyer, Far East Air Force Commander. He sent the 4th FIW’s latest F-86A-5s, borrowed from other wings, and the 27th Fighter Escort Wing with F-84E Thunderjets to Korea. In combat, the straight-winged F-84s would claim ten MiGs but lose 18 to MiGs. For the F-86 crews there would be 25 aces in the 4th Fighter wing alone. The first fight occurred on December 17, 1950, within a couple of days of the 4th FIW’s arrival at snowy Kimpo airbase and Lt Col Bruce Hinton scored the Sabre’s first MiG-15 in a strenuous dogfight (one of many detailed in the book).

In studying the many combat reports that the early Sabre pilots submitted, it was always interesting to see how the rules of dogfighting, firmly established by pilots in the two world wars, were applied and adapted for the higher speeds and altitudes involved in the jet battles over “MiG Alley”. Korea may have been to “forgotten war” but it reinforced the dogfighting techniques which would be carried forward once again into the air battles over North Vietnam 15 years later.

In fact, many of those Sabre pilots had racked up impressive scores of aerial victories in World War II and a few, like Jim Kasler, would go on to further achievements in Vietnam. Others were “new guys”, eager to learn from the “old heads”. 1Lt (later Brigadier General) Alonzo Walter was in the first 355th “Indian Head” FIS detachment to Suwon in 1950. He noted that many lead pilots were experienced veterans but, “virtually every wingman, such as myself, was fresh out of flying school. I had 75 hours flying the F-86, the first jet I flew, but I never fired the guns until my first combat mission. We had faith and discipline, however, and the ‘old heads’ were great teachers. They were the shooters while we were the ‘lookers’ who watched their tails in combat”. The emphasis of flight integrity and the role of the wingman are recurrent themes in exploring the large-scale fights in North Korean skies.

Sabre pilots quickly learned to respect the pilots of the MiG-15s and soon suspected (correctly) that most were Soviet airmen who had volunteered to defend North Korea’s main cities and limited industrial base. They also gained an understanding of the tough MiG-15 – much lighter than the more complex Sabre and able to gain a significant height advantage over the Allied aircraft. However, its limitations could be used to the advantage of the USAF pilots. Compared with the F-86, the MiG-15 allowed pilots worse vision from the cockpit, its controls worked poorly at high speeds and low altitudes and its gunsight was inaccurate and hard to operate. In capable hands, though, it could easily outclimb an F-86A and its heavier 23mm and 37mm armament could destroy a Sabre with a couple of hits at long range.

A Sabre pilot had to get close enough to a target for his lighter, .50 cal machine guns to inflict sufficient damage on a MiG-15’s quite simple structure to bring it down. Where possible, fire was concentrated on the MiG’s British-designed turbojet or, of course, on the lightly armoured cockpit. He could also use the greater weight of his aircraft to escape trouble by diving steeply, and the Sabre’s stronger structure was more likely to survive the consequent demanding “g” loads. On several occasions, MiG-15s broke up under similar strains. Many other MiGs returned to base with numerous bullet holes but with little damage to their relatively few internal components.

Too often pilots of both sides claimed aircraft that were actually damaged as “kills” and the disparities between pilots’ claims and the true numbers of losses has taken decades of analysis to resolve fairly satisfactorily. For both sides, the true numbers of “kills” were undoubtedly much lower than the figures at the time suggested. The Sabre pilots’ superiority over MiGs was for long claimed to be between 10 to 1 and 8 to 1 in terms of “kills” but more recent studies suggest a much lower figure. However, there were many factors that obscured the true picture and most of them could be traced to the confusion of high-speed dogfights in which pilots had seconds to attack a foe before being attacked themselves. There were only 90 Sabres available in Korea at any time in 1950–51 and they were often seriously outnumbered in aerial combat when fights often occurred between one or two flights of Sabres and up to 100 MiGs in several waves.

The 4th FIW operated from incredibly primitive airfields, initially in the coldest Korean winter for 177 years. These conditions created formidable challenges for the Sabre ground crews who achieved extraordinary availability rates for their charges despite spares shortages, lack of equipment, and savage weather conditions. Driven out of their bases by the unexpected Chinese invasion in June 1950, the Sabre units had to operate from Japan temporarily until Allied troops could force the Chinese northwards again. The invasion coincided with a large increase in the size of the MiG force and the introduction of Chinese-flown MiGs. When a stalemate situation was established along the Yalu River and missions could flown at closer range from Suwon in 1951 life was similarly harsh. As pilot Dick Merian recalled, “We lived in tents and mud and ate some very bad food. It was so bad at times I used to barter with GIs for their C-rations.”

Their missions were flown in support of raids by USAF B-29 and many others by tactical aircraft of the USAF, RAAF, and US Navy. Large-scale fighter sweeps, reminiscent of World War II, were met by large formations of MiGs that sometimes exceeded 100 aircraft. The book will analyze some of these extraordinary dogfights in which many claims were made by both sides and outstanding examples of airmanship were seen. In studying the individual accounts of engagements, it was fascinating to see how highly experienced pilots from both sides used all the well-established tactics of dogfighting in lengthy engagements that were often curtailed by lack of fuel. Sabre pilots had to make long flights to the skies close to MiGs’ bases in “MiG Alley” and they had no recourse to in-flight refueling. Quite often they had to calculate a long glide back to base, re-starting the engine to use up their last few gallons in landing safely.

Late in 1951, the 4th FIW’s hard-working F-86As were gradually replaced by upgraded F-86Es and many veteran USAF pilots completed their combat tours. On the other side the steady withdrawal of the battle-hardened Soviet pilots brought inexperienced newcomers and increasing numbers of Chinese pilots into the fight, leading to very different tactics and outcomes in many cases.

The battles over “MiG Alley” brought two fighter forces, which had quite recently been allied against Nazi Germany, into conflict with each other. Soviet pilots regretted this and were unfamiliar with the Americans’ tactics, having never fought them before. A Soviet ace, Aleksander Smorchov reflected, “We did not view the Americans as enemies, but only as opponents”. They accepted the anonymity conferred by Stalin’s insistence that they posed as Chinese or North Korean pilots and realized that their contribution was unrecognized within the USSR. When they returned home their combat experience was studied, but lessons were not passed on to pilots in replacement units. The experiences of Sabre pilots were closely studied in the USA and led to a whole new generation of supersonic fighters.

If you enjoyed today's blog post, you can order the book in both paperback and digital formats here