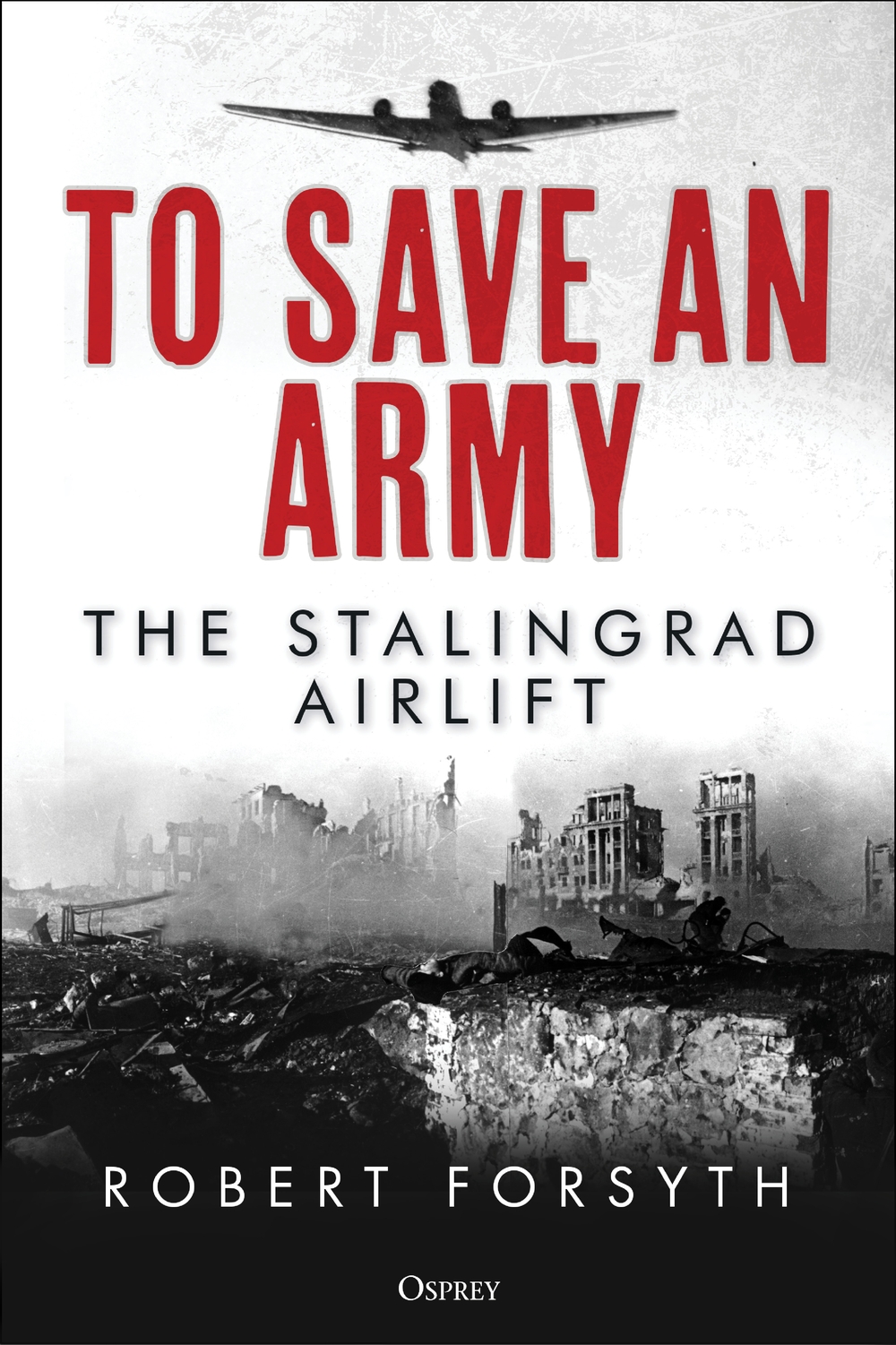 In his second blog post, author Robert Forsyth offers a passage from his book To Save An Army – The Stalingrad Airlift. Robert explains that by early December 1942, Russian forces were maintaining pressure on the German pocket that had formed at Stalingrad. The beginning of December was marked by bitterly low temperatures and howling winds, bringing sleet, snow and ice that covered all the airfields being used by the Luftwaffe for the airlift. General Martin Fiebig, the Luftwaffe commander in direct control of the airlift on the 1st noted that it was ’Terrible how the Junkers and Heinkels have to grope around in the snow on their return from Stalingrad, but no mishaps yet.’ The text describes the following day’s events:

On the morning of 2 December, take-off of the Ju 52/3ms slated to fly to Stalingrad was delayed until 1130 hrs when their fighter escorts were eventually able to rendezvous with the transports. As Fiebig noted starkly:

After yesterday’s snow, everything is frozen now. We can still get He 111s out, but Ju 52s only after 11.30, and in two formations. Lack of heating equipment. Not enough was supplied for the large number of aircraft. Transport aircraft have no business to be here. Thawing takes too much time and is too much work.

Despite this, Ju 52/3ms of KGr.z.b.V.700 doggedly headed out towards Stalingrad, but they lost two of their number. If that was not bad enough, marauding Soviet Okhotniki (patrolling fighters) took the opportunity to strafe airfields in the pocket, and in the process claimed to have destroyed no fewer than 17 transports, although in reality this figure far exceeded actual German losses. To 2 December around 17 He 111s and 19 Ju 52/3ms had been lost, and not all down to VVS fighters or enemy anti-aircraft fire. 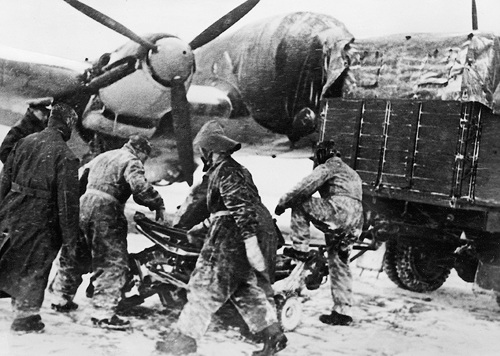 He 111s of I./KG 100 also flew three supply missions, carrying ammunition into the pocket and flying wounded men out, some of the pilots having to evade the Russian fighters as they did so. Oberstarzt Dr. Heinrich Potthoff, the Fleet Doctor for Luftflotte 4, saw at first-hand the arrivals of the wounded in Ju 52/3ms at Tatsinskaya at this time. He recalled:

Immediately after an aircraft rolled to a stop, our ambulances with their medical personnel were at the spot ready to take the wounded off. One medical officer supervised the onward transportation to the army reception points for the sick and wounded. Our medical service tents on the airfield were only used when a temporary ‘traffic jam’ occurred as a result of the arrival of further transports. The unheated tents – they were former cavalry tents – were there for an emergency. 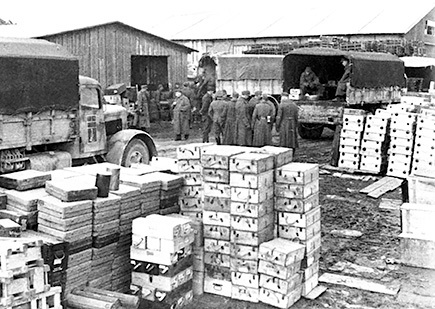 During the night there was always hectic activity at the airfield. One aircraft after another landed, refuelled, loaded-up with all sorts of supplies, and was made ready for take-off again. But snow, snowdrifts, low temperatures and ice made operations and providing supplies more difficult. The sick and wounded suffered very much because of that. Those sick and wounded that had been flown out were bodily and psychically at a considerably low ebb. They suffered from exposure due to the cold. Especially endangered were the wounded following loss of blood, shock and collapse. The medical services in the pocket very much had their hands full.

Commencing on the 2nd, the Soviet Don and Stalingrad Fronts resumed their attacks against the pocket. The fighting was ferocious, but somehow 6.Armee held its lines across all its fronts and even launched local counter-attacks. Lt Gen Pavel Ivanovich Batov, commander of the Don Front’s 65th Army, related how, after two days of preparations, his forces: . . . tried to penetrate through the western crest of the heights. We did not succeed in doing so. The fighting was fierce. As soon as our units advanced forward, and did not manage to dig in, the counter-attacks began.

But the final balance sheet told the real story. In repulsing two assaults by the Soviet 21st Army, 676.Infanterie-Division on the western edge of the pocket reported the killing of 25 enemy soldiers, with another 19 captured, as well as the destruction of seven tanks and the capture of five machine guns. However, the division later reported 44 men killed, 72 wounded and one missing. Pickert, who spent much of the day visiting his Flak crews, found them to be of ‘good faith and confidently bearing all the trials and tribulations’. The following day, he had his midday meal with one of his batteries – ‘Food is scant: two slices of bread per day and thin soup’.

Meanwhile, at VIII.Fliegerkorps headquarters, evidently the pressure on Fiebig was beginning to mount. On the 3rd he revealed his true feelings in a somewhat cryptic diary entry:

No take-offs. No supplies. Hail, snow and fog. Am trying to fly to the Luftflotte commander in a Storch. Fog all around Kamesk. Von Richthofen does not have the courage to express his views intelligently. Terrible situation. Do I, a subordinate, have to bridge the gap? I am trying to call him, but am unsuccessful – he is not well.

On the 4th, Kühl managed to get 17 He 111s and 50 Ju 52/3ms, including three Romanian machines of the Escadrila 05, out in ‘the worst weather’ to take around 140 tons of ammunition, fuel and supplies to Pitomnik. As the Lufttransportführer noted:

Maintaining operational readiness during the air supply period was made much more difficult because in flying continual day and night operations, every time a mission was planned, possible changing weather conditions had to be considered and, wherever possible, exploited.

Meanwhile, the same day from Moscow, the commander of the VVS, Gen Novikov, instructed the commanders of 8th VA (Gen T. T. Khryukin) and 16th VA (Rudenko) to refine the existing modus operandi of action against the German transports and the air blockade around the Stalingrad pocket. This highly focused campaign had become regarded as one of the most important being undertaken by the VVS.27 Novikov planned a series of four zones which wrapped around the pocket. Zone 1, the outer zone, ran from a point on the Don some 300 km north of Morosowskaya, around Stalingrad, extending east from the Volga by almost 300 km, and then to a point some 250 km south of the lower Don. The northern part of the zone would be covered by 17th VA, while the southern part would be patrolled by around 450 fighters, Il-2 Shturmovik ground-attack aircraft and bombers of 8th VA. The second, circular zone of some 100-150 km radius, was segmented into five sectors, the two northern sectors covered by 175 serviceable aircraft of 16th VA and the three southern sectors by 8th VA. A third zone comprised a circular, ten-kilometre-wide anti-aircraft belt enclosing the pocket, while the fourth, inner zone covered the airspace directly over the German-occupied pocket. Zones three and four were the most difficult to penetrate, and because of the gun belt, Luftwaffe crews were forced to deviate from their pre-set, radio beacon-assisted routes, resorting to visual navigation in bad weather.