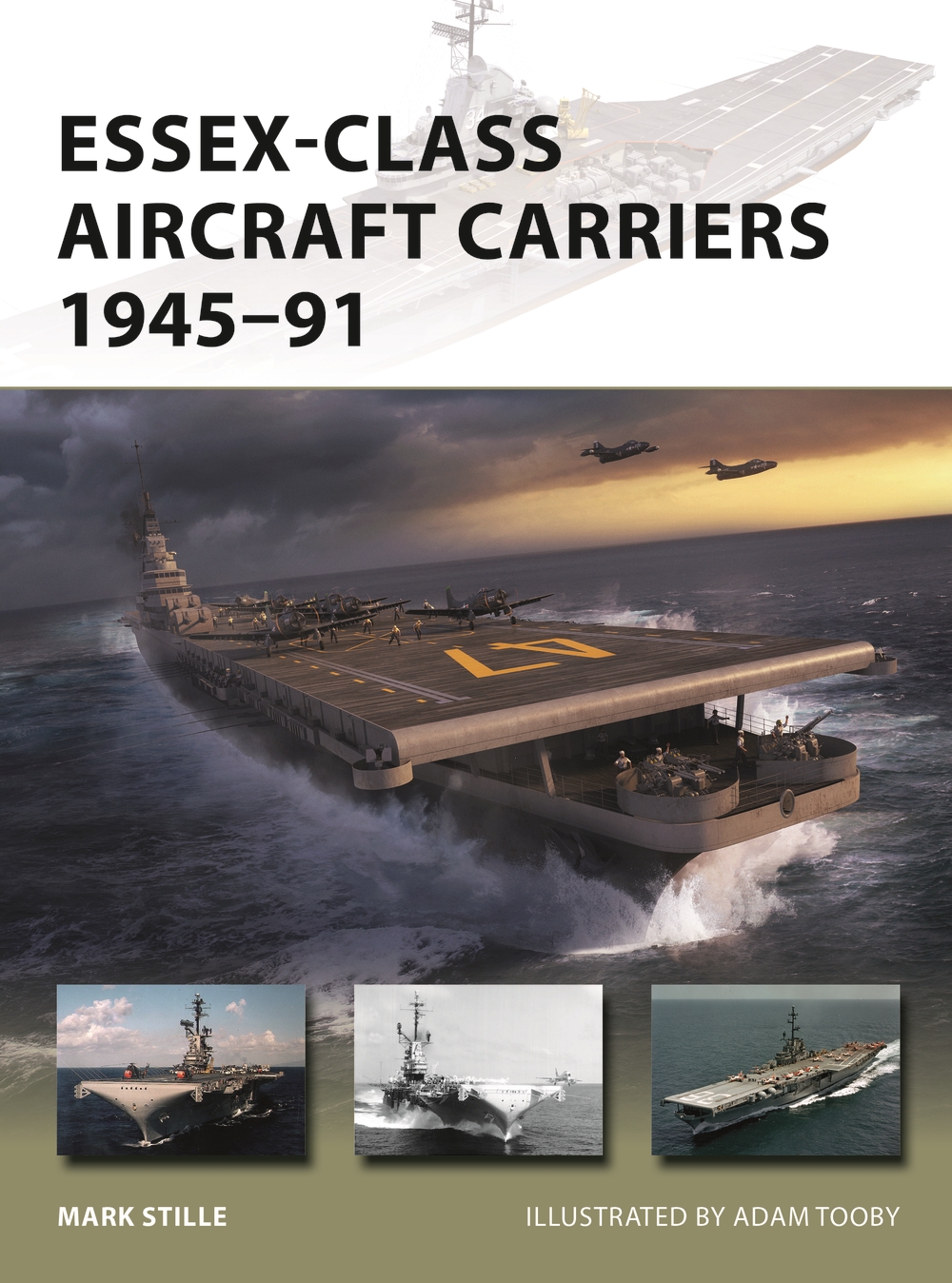 In today's blog post, Mark Stille introduces us to the Essex class.

The Essex class was the most numerous class of fleet carriers ever built and among the most, if not the most, successful. Essex-class carriers led the United States Navy (USN) to victory in the Pacific during WWII and, though several ships were damaged, two severely, none were sunk. But service during the war was just the beginning of the saga for the Essex class.

Following the end of hostilities, the USN had no need for a huge carrier fleet. Most Essex-class ships were placed in reserve by 1947 and only five ships completed after the war were kept in service. When war broke out on the Korean peninsula in June 1950, only four Essex-class carriers were active. All of these saw action in the Korean War. The advent of war led to a massive increase in naval funding and the return of all but two of the Essex-class ships to active duty. During the 1950s, the class underwent a series of modernization schemes. With 22 ships in commission, the Essex class was the backbone of the USN throughout the 1950s until supercarriers began to enter service in the early 1960s. With the supercarriers in service, the Essex class was relegated to secondary roles, but they still provided a sizeable portion of USN air power during the Vietnam War. A single Essex carrier served until 1991 as the USN’s training carrier. Four of these ships still exist today as museum ships.

The family tree of the Essex class is complex because of the number of ships in the class, their many roles, and the different modernizations given to them. Initially, a total of 32 Essex-class ships were authorized to be built. Construction began on 26 but work on Reprisal and Iwo Jima was stopped in 1945 – Reprisal was some 50% complete but work on Iwo Jima had only just begun. Construction of Oriskany was suspended at the end of the war when the ship was 85% complete and she was only finally completed in 1950 as the template for the Essex-class modernization program.

Of the 23 Essex-class carriers completed during or right after the war, 14 were modernized as part of the Ship’s Characteristic Board (SCB –established in 1945 to coordinate the design and construction of USN ships) SCB 27A or SCB 27C schemes. Eight received SCB 27A upgrades and another six the SCB 27C modernization work. The next phase of modernization was the SCB 125 program. Of the eight SCB 27A ships, seven subsequently received SCB 125 work. All six ships that received the SCB 27C work also received additional modernization under the SCB 125 program.

Nine ships were not modernized: Franklin and Bunker Hill were the two most heavily damaged ships from the war, both were retired in 1947 and never returned to service. Since both were fully repaired, the reason for not

being recommissioned was not due to any enduring battle damage, but because their recent reconstruction made them candidates for a major modernization project that never occurred. Boxer, Leyte, Antietam, Princeton, Tarawa, Valley Forge, and Philippine Sea were among the last ships completed and constituted most of the ships left in commission after 1947. They received only minor modernization. Of note, Antietam received the USN’s first angled deck in 1952. Essex-class modernizations were a remarkable story in themselves, and the modernization of every ship is traced in NVG310: Essex-class aircraft carriers 1945–91.

The type of modernization determined what kind of role the ship performed in the Cold War. Most carriers started out as CVAs – attack aircraft carriers but not all carriers operated in an attack role; some Essex-class carriers were later designated as antisubmarine warfare support aircraft carriers (CVS) and dedicated to antisubmarine warfare (ASW). Some Essex-class ships gained a new role to support amphibious operations and were given the designation amphibious platform helicopter (LPH). The longest-serving Essex-class ship, Lexington, was dedicated to training duties and was designated as a training carrier (CVT).

In addition to their power-projection missions during the Korean and Vietnam Wars, the Essex class was also an important component in the USN’s plan to deal with the Soviet Navy’s submarine force. Against Soviet diesel submarines, the Hunter-Killer Group concept would have been successful, but against Soviet nuclear submarines the prospects for success were much reduced. In any event, the assessment that the Soviets were prepared to fight another battle for the North Atlantic against Allied sea lines of communications was overplayed, and thankfully the Essex class was never tested in its ASW role.

It is just as well that the modernized Essex-class ships were never tested against an opponent with well-developed antisurface warfare capabilities. The ships possessed marginal stability and thus a reduced ability to take damage. Fortunately, they were never exposed to underwater damage after WWII and this lack of stability never became an issue in combat. Each time more radars were added, and heavier aircraft embarked, weight compensation was required. This meant the ships were basically unarmed by the end of their careers though the weapons being removed had increasingly little value against modern air or cruise missile attack. Given their declining survivability in high-threat environments and the manpower requirements to keep them running, combined with the difficulty in maintaining these older ships, they reached the end of their useful lives by the end of the 1960s.

The Essex class dominated one war for the USN, acted as the central part of the USN’s naval air campaign in another, and still gave valuable service in a third war over 20 years after the ships in the class first entered service. This record is unmatched by any other class of ships in naval history.