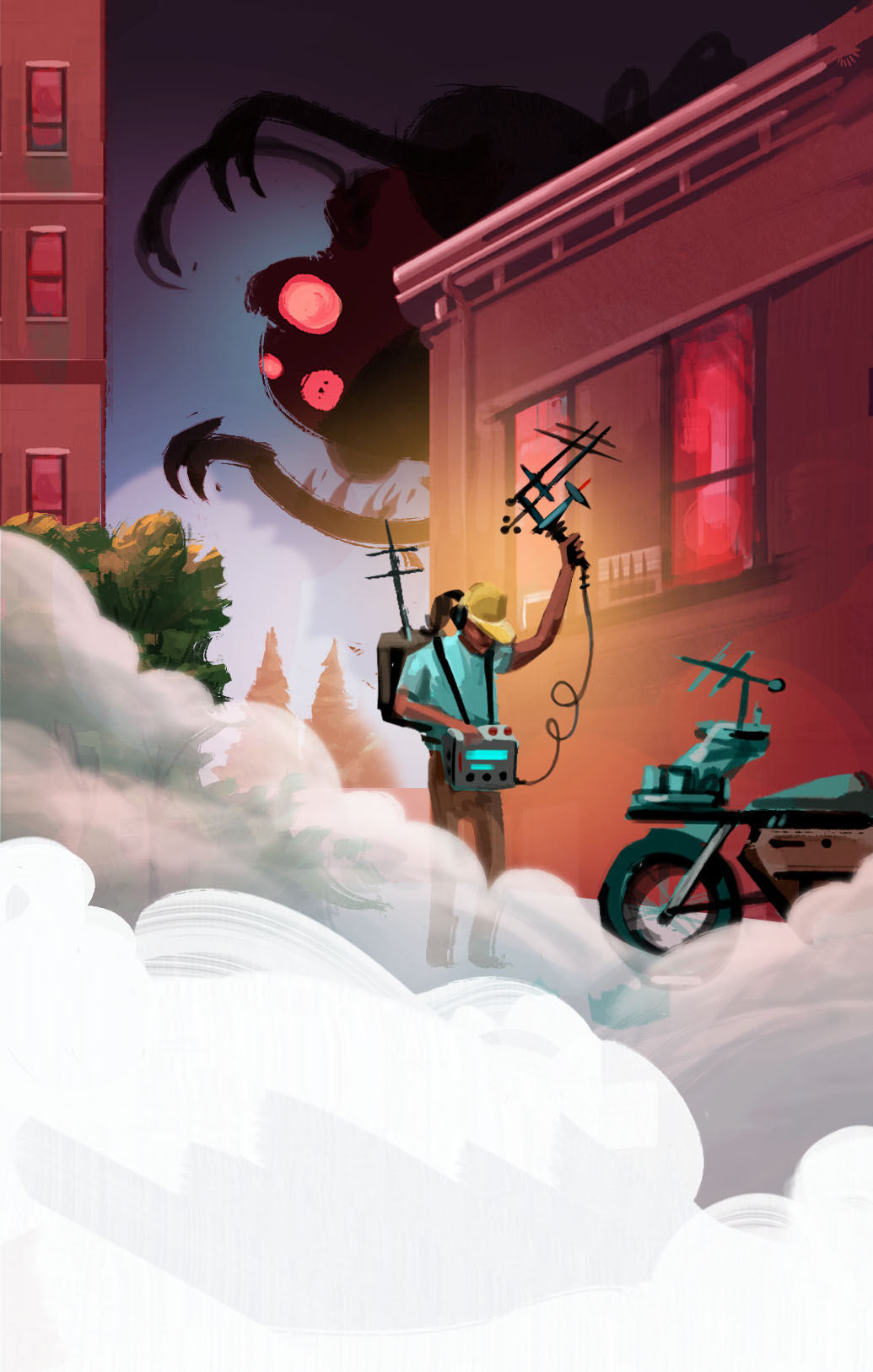 This April will see the release of Cryptid: Urban Legends, the standalone spiritual sequel to the award-winning deducation game, Cryptid. It's an exciting cat-and-mouse chase game of abstract puzzle solving deducation. We spoke with the design duo Ruth Veevers and Hal Duncan to see how Urban Legends went from design dream to tabletop triumph.

Cryptid: Urban Legends is a hidden movement game where the movement isn’t hidden. It’s also an asymmetric game where you do the same stuff. It sounds like a joke – and it is –  but it also says something about how we got to the game we ended up with.

It’s an imperfect categorisation, but it’s a useful way to look at the genre. In Urban Legends, we wanted to make a game of both active and passive detection, where information passively “leaks” into the system via the hidden player’s movement, but where the detective player manipulates the game state to make those leaks as valuable as possible for them.

Our first prototype was a hidden movement game played on a square grid, with cubes of different colours in each square. The hidden player moved between the corners of the squares, and announced either the colours of the cubes or the numbers of cubes that they moved past. The detective in turn moved cubes between squares, trying to gather better information with every hidden move. This puzzle of arranging the number and colour of pieces surrounding paths is the core of the game that survived all the way to publication – but the surrounding structure has changed dramatically! 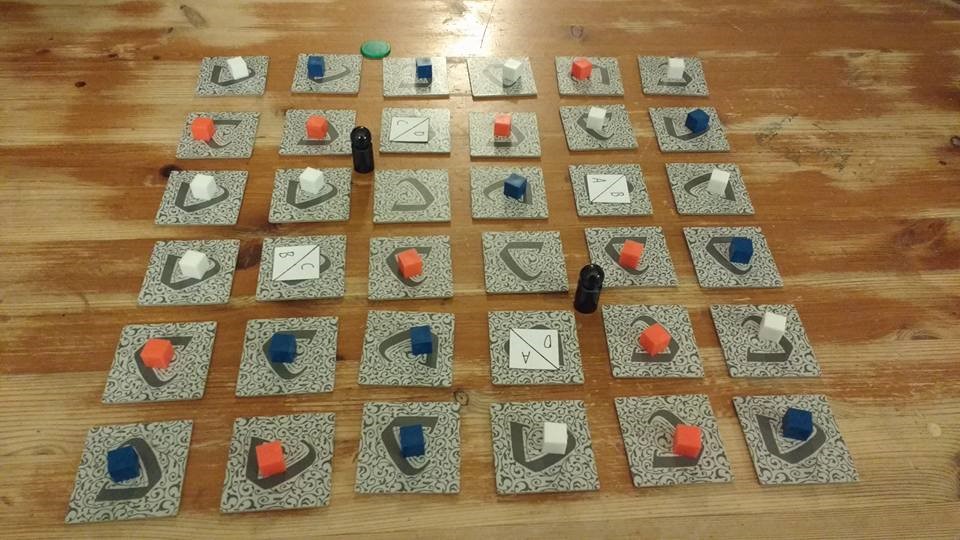 The first prototype, based on a square grid artfully constructed using face down Carcassonne tiles. The core of the game, arranging cubes of three colours either side of paths, is already in place here.

Where we get technical

You can analyse most hidden movement games using graph theory. By drawing a tree of nodes, you can plot out the possibility space of a hidden mover’s possible positions. In such a tree, each node at depth n represents a position they could have occupied at the end of turn n, and its “children” represent the positions they could have moved to on the following turn. If the detectives find out the hidden player wasn’t at a given position on a turn, they can remove that node and all its descendants from the tree. The detectives’ goal is to shrink the number of leaves – the number of possible current positions of the hidden mover – down as low as possible. The hidden mover, conversely, wants to grow as many leaves as possible so they can avoid capture. 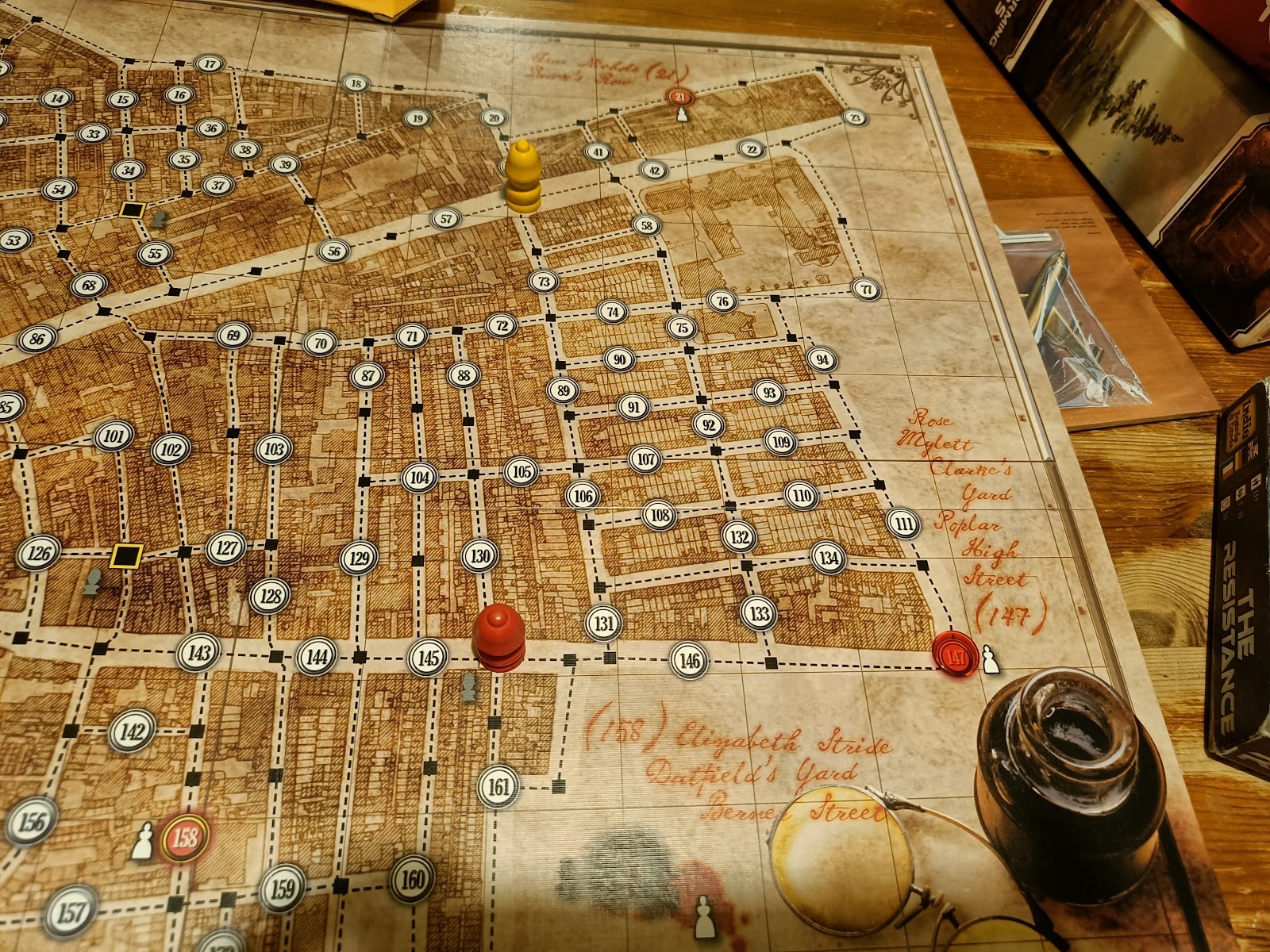 A possible situation in Letters From Whitechapel. The hidden player, Jack, started the night on the red circle (numbered 147). They have since moved twice, with each move taking them along a dotted black line to another circle, without crossing over either another circle or the red police pawn. For this example, let’s assume that the red police pawn has stayed in its current location for the last few turns.

The red police pawn searches all adjacent spaces (130, 131, 145, 146, and 161) but finds that Jack hasn’t visited any of them. The diagram shows what this new information has done to the detective’s knowledge. The 146 node and all of its children have been eliminated. The detective can also eliminate the 131 and 146 leaves from among the children of the 133 and 134 nodes, as whichever way Jack went, they did not pass through either of those circles.

If you think about hidden movement games in this way, then you’ll see that every time new information enters the system, the detective players need to update their mental models of the tree. This is where I’d gotten stuck on the design of Urban Legends, as the detective player usually wanted to keep track of all that information, often needing to take notes to do so. Doing so every time the hidden player moved took time, leaving the hidden player with a lot of downtime, and too much of the game just involved the detective trying to understand the game state without actually making any decisions.

A big conceptual change for the game came about when Ruth asked whether it would be possible to move that tree from being a mental structure to instead being represented on the table. Could we play directly on that expanding and contracting tree structure? The answer we arrived at was “sort of”. We imagined a version of the game where the detective distributed the coloured cubes either side of edges on a binary tree, and the hidden player recorded which leaf they’re on and announced the cubes they moved past. The only problem was that it only fits in your imagination. When we tried to physically represent it, be it with cards or tiles or anything else, it got very wide very quickly, creeping off the edge of the table at alarming speed.

The game sat on the shelf for a long time again, until I woke up one day with an idea that turned out to work. If we couldn’t represent a tree exactly, we could still have something tree-like, if we allowed some nodes to have two edges pointing inwards. You could easily represent that with a chequerboard pattern of cards, and it let our coloured cubes sit in the spaces between the cards, with the hidden player moving from diagonally from card to card. That improved the width problem, with a depth n tree-like structure having n+1 leaves rather than the 2n of a binary tree, and allowing them to be evenly spaced. However, our spatial woes were not over. 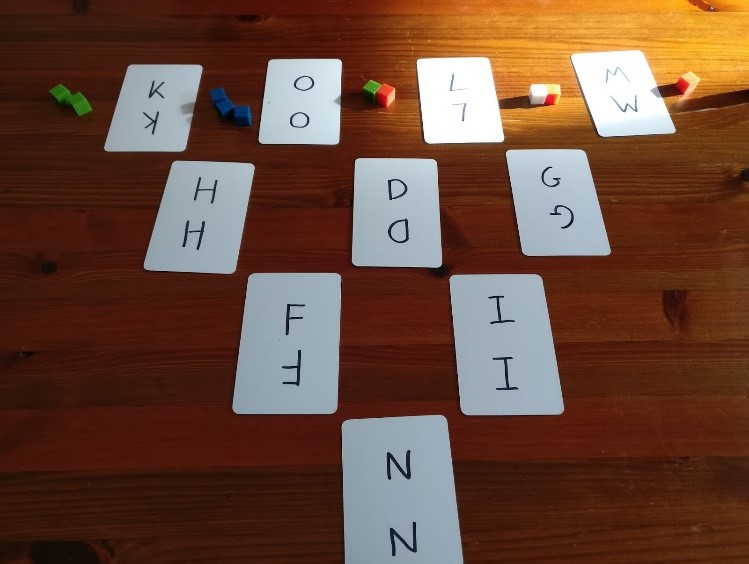 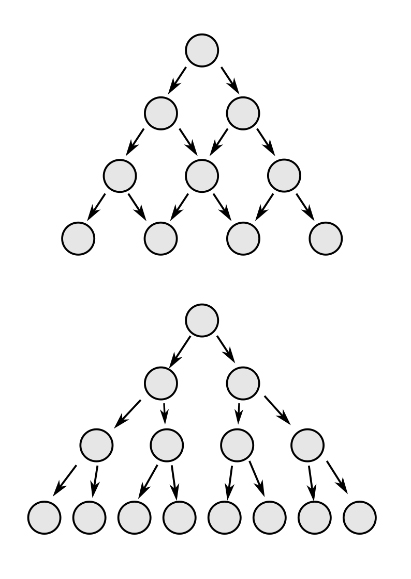 Left: Playing on a tree-like board. Right: At the bottom, a graph representation of our tree-ish structure, compared to a binary tree above it.

Even with our tree-like structure, the game would still overshoot most gaming tables very quickly, only now in the other dimension. We realised, however, that we didn’t need to represent the full tree all of the time. After all, the hidden player was always on one of the leaves, making this and the next layer the focus of the game. This allowed us to shrink the depth to only two, and by alternating which side of the table the next layer was placed on, the game could be kept in the middle of the table. 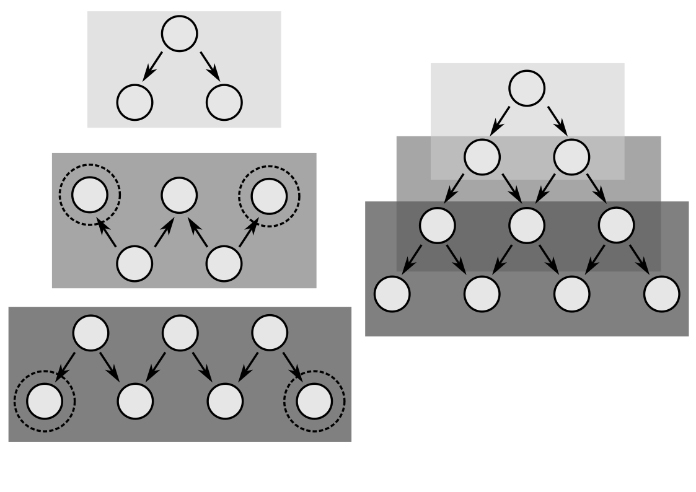 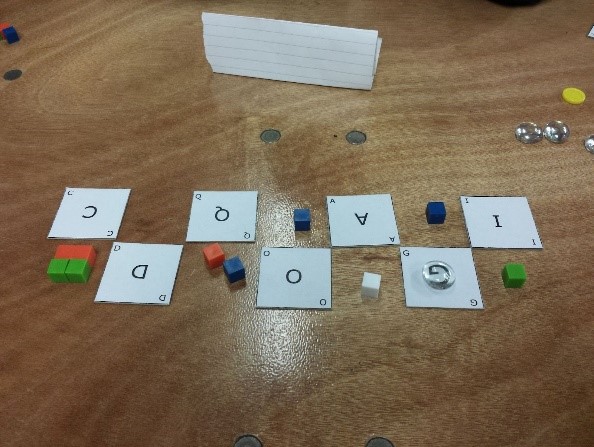 Left: The tree-like structure for the first three moves. On each turn, we only represent two of the levels of this, as highlighted by the overlapping grey boxes. Middle: The chequerboard representation of the sections matching sections. The dotted circles show the spaces added to go from the previous section to the new section. Right: The physical representation of one of these sections of the tree.

A problem that had lingered since the early grid-based prototype was that the game felt less interesting for the hidden player. Where they only moved and gave out information, the detective could choose between moving their pawns and manipulating the cubes between the different squares. We tried a variety of iterations, including giving the hidden mover special abilities or even their own currency they could use on extra actions and powers. Fundamentally, though, the problem was that the interesting part of the game was manipulating the cubes, and we hadn’t given the hidden player enough ways to interact with that. The game was too asymmetric, with only one player having access to the interesting part. 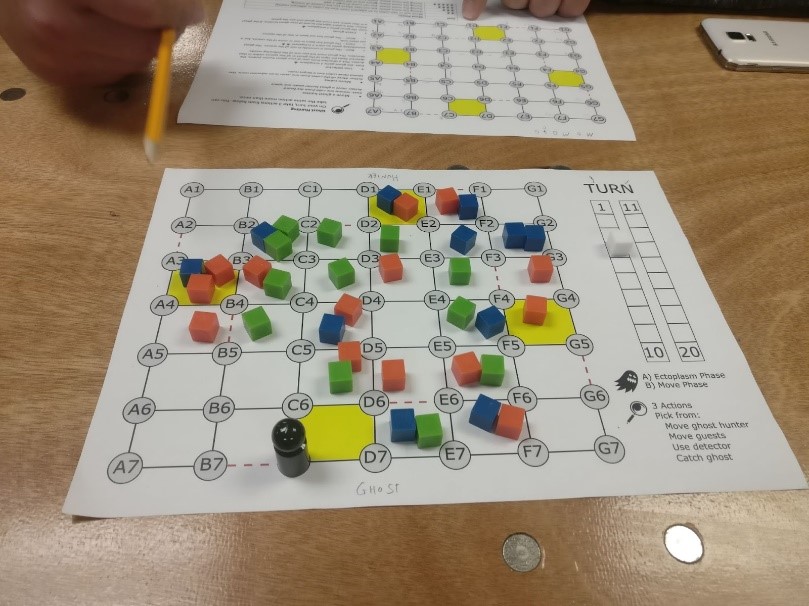 A version of the game – still square grid based – where the hidden player was a ghost who gained ectoplasm which sometimes allowed them to move cubes.

We eventually decided to switch to a turn structure where players alternate performing one action, where each action allows them to move the cubes in a different way. The players were now interacting with the game in a largely symmetric way, but trying to use the same tools to achieve opposing objectives, trying either to spread or shrink the places the hidden player could go. Importantly, the bulk of each player's interaction was with the most interesting part of the game.

At first, this was a system of perfect information, with each action always being available to both players. This invited a lot of calculation, as you could try to parse every possible move or response your opponent would make. We eventually moved the actions onto cards in a private hand, with the aim of shortening the information horizon. You can’t know perfectly what moves the opponent has available, or what you will have beyond your current hand, so the possible future states become hazier. 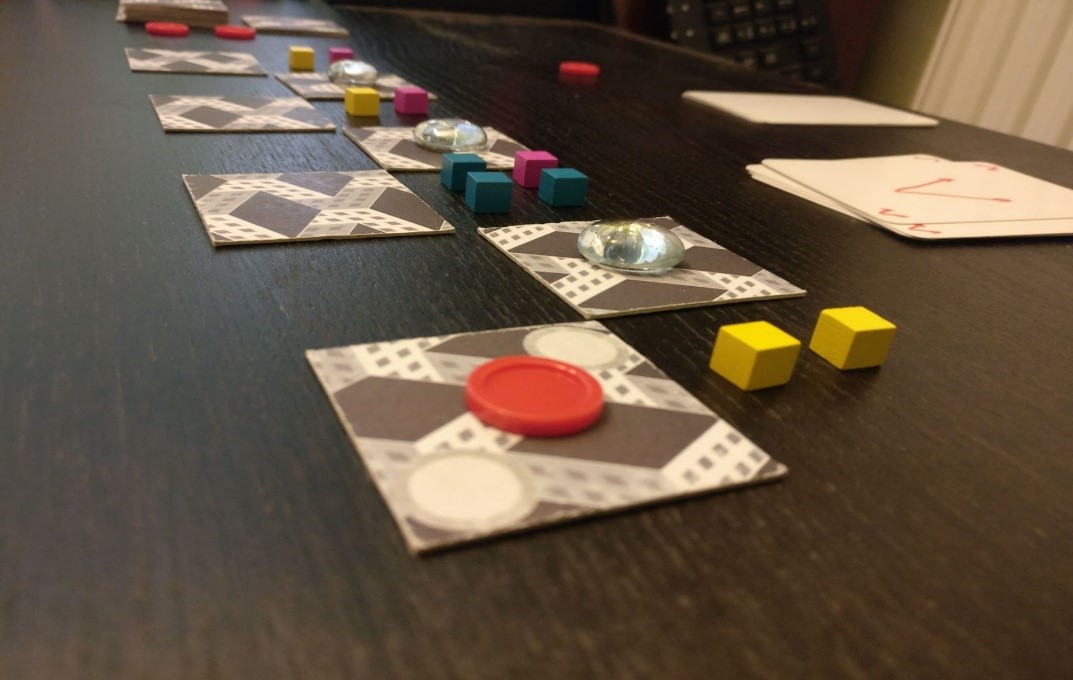 For the detective player in a hidden movement game, the goal is usually to work out the location of the hidden player, but the specific way of acting on that varies between games. In Specter Ops, for example, the detectives move so they’re in line of sight and shoot, while in Letters from Whitechapel, they perform an arrest on the space they think the hidden player is in. Up until this point, we’d kept a similar kind of structure to Letters, where at some point the detective needed to announce where they thought the hidden player was, and if correct they’d win.

The problem was that, with the game becoming more and more compact, the probability of a guess being right at random became higher than we were comfortable with. At the same time, we’d started including some tokens for the detective player to place on tiles where the hidden player could be. Since their introduction, we’d been wondering whether we actually needed to have the hidden player to be in a specific place. It struck us: could they not be at all these spots? It turns out, they could. In the final game, the detective – or the Scientist, rather – needs to narrow down all the possibilities to a single location, while the hidden mover – the Cryptid – needs to expand the possibility tree as wide as possible. This is exactly what they would be trying to do in a hidden movement game, only there isn’t any hidden movement in the game. 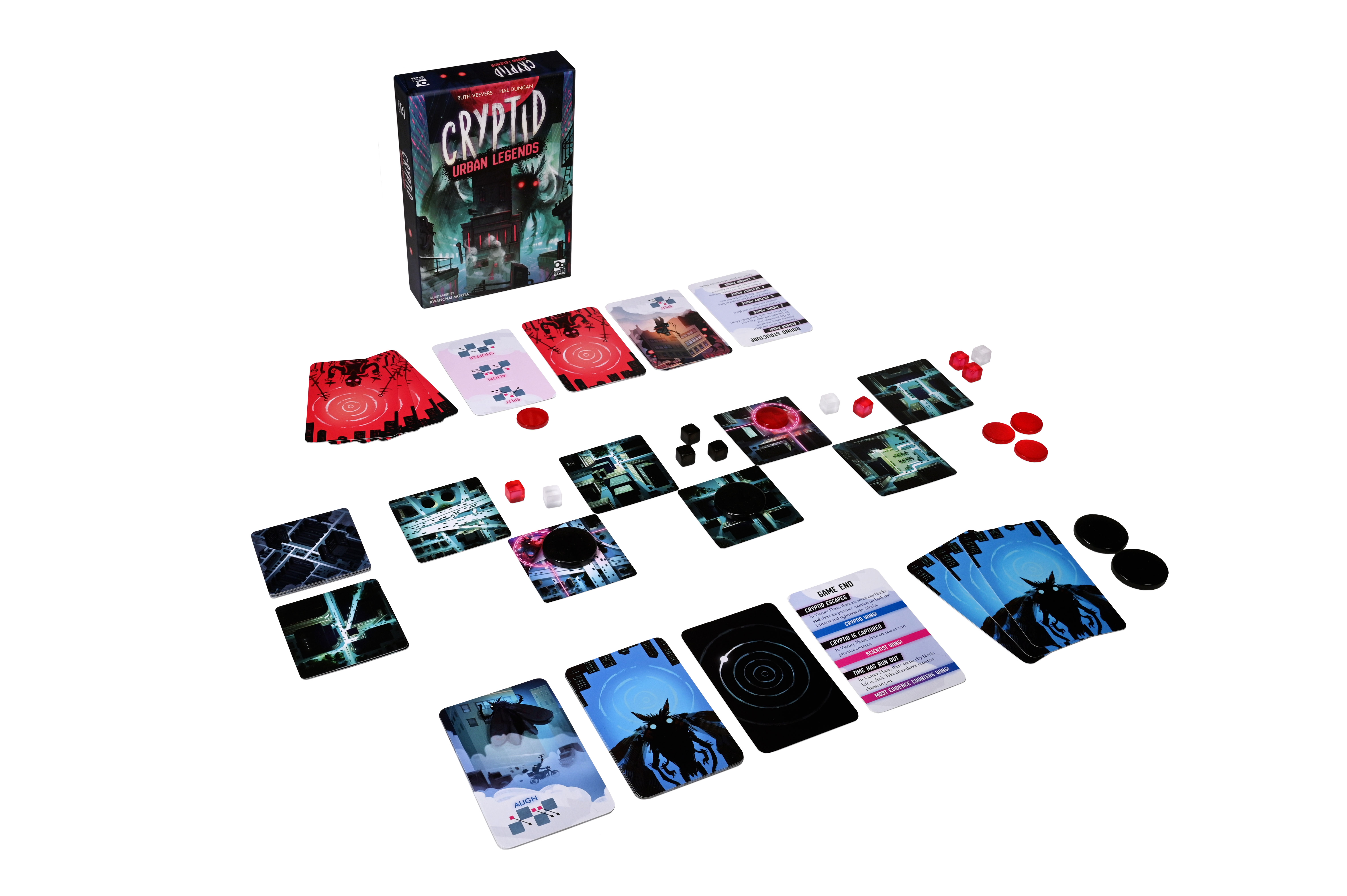 And that’s how we ended up, five years since its inception, with Cryptid: Urban Legends: an asymmetric hidden movement game where movement isn’t hidden and you do the same things as your opponent. - Hal Duncan & Ruth Veevers

The hunt is on! Cryptid: Urban Legends is designed by Ruth Veevers and Hal Duncan and illustrated by Kwanchai Moriya. It’s coming in April 2022 from Osprey Games. Stay tuned for more Cryptid action!