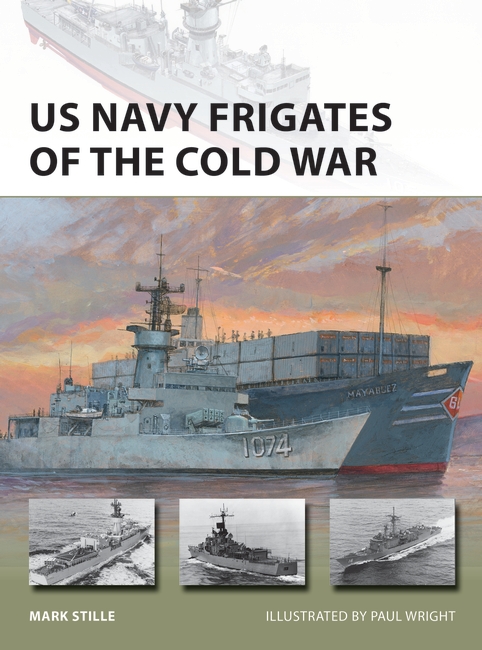 The Cold War build-up of the Soviet Union’s military power included a dramatic growth in Soviet naval power. The United States Navy (USN) exited WWII as the predominant naval power in the world, but the growth of the Soviet Navy presented a new challenge. The centerpiece of the Soviet Navy was its submarine fleet, so the USN faced a growing antisubmarine warfare (ASW) problem. By the late 1950s, the USN was dealing with block obsolescence of its war-built destroyers and destroyer escorts. The old ships simply lacked the speed and weapons to contend with modern submarines. In the absence of a massive Soviet submarine building program, but with the expectation that one could begin at any time, the USN placed emphasis on developing prototype frigate designs. These included the selected modernization of destroyer escorts in the mothball fleet and the design and construction of new frigate classes that could be mass produced when needed. Once Soviet submarine construction began to accelerate in the 1960s (eventually topping 300 boats), the USN countered with a high number of large ASW frigates. Due to the difficulties inherent in detecting, classifying, and tracking a submerged submarine, ASW was a game of numbers that drove the USN to build and operate large numbers of ASW escorts. In particular, the USN feared a concerted Soviet submarine campaign to cut the sea lines of communications (SLOC) to Europe. After the fall of the Soviet Union, this threat was revealed to have been overblown, but to protect the potential threat to SLOCs, the USN was forced to maintain a large number of frigates and to prepare a frigate design for mass production.

The first attempt to produce a frigate suitable for wartime mass production was the Dealey class. It was little more than a modernized WWII destroyer escort, and it turned out to be a fairly expensive replacement. These ships were capable ASW platforms as they carried the new SQS-4 sonar and a new stand-off ASW weapons named ‘Weapon Alpha’. The Dealeys proved the viability of a single-screw design. They were treated as destroyers during their careers which required their engineering plant to be run at full power, however this quickly wore them out. All were retired before they had reached 20 years’ service.

The next class, named after the lead ship Claud Jones, was seen as a step backward. It was slower and less well armed then the Dealey class. They carried about half the ordnance of a Dealey-class ship and lacked a long-range ASW weapon. The Claud Jones class was an effective ASW design, but only for the limited role of convoy escort. Though designed to be austere, they were just 10% less expensive than a Dealey-class unit. On the positive side, the Claud Jones class had a slightly greater radius and was considered to be seaworthy and possessed good habitability. They were not multimission platforms as they lacked significant antiair or antiship capabilities. The USN preferred the Dealey class.

The next three classes, comprising a total of 63 ships, were designed to be more capable ships and were virtually second-class destroyers. The Garcia class was still primarily an ASW platform but did possess some multimission capability. The Brooke class was the USN’s preferred ocean escort by virtue of its missile battery but was too expensive to build in significant numbers. Unable to afford mass production of a frigate with a missile system, the Knox class presented a design suitable for mass production. It was a fine ASW platform, but initially lacked a multimission capability. The single gun design was widely criticized after the 5in/54 Mk 42 mount initially displayed jamming and maintenance issues. This often meant that Knox-class ships deployed to Vietnam to provide naval gunfire support were placed in the embarrassing position of not being able to accomplish their mission. Since the Knox class was a big ship, it did have room for systems growth. Most importantly, the hangar and flight deck for a failed unmanned helicopter system was expanded to accommodate a manned helicopter called LAMPS (Light Airborne Multi-Purpose System). The ships possessed better habitability than destroyers of the period and thus were generally liked by their crews. The single screw did not present a real problem since the propulsion plant was reliable and the ships were still responsive though sluggish at slow speeds. Later in their careers, the Knox class had their combat capabilities significantly upgraded with the addition of the Harpoon antiship cruise missile, a short-range surface-to-air missile (SAM) system, and a point-defense air defense gun (called CIWS or close-in weapons system).

The most numerous USN Cold War frigates were the 51 ships of the Perry class. These were criticized for being “low end” (not capable of handling high-intensity threats) ships, but the USN had always operated less capable ships since cost precluded the construction of only “high end” ships. Numbers were needed for presence and ASW missions, and the Perry class provided the required numbers to replace the aging frigates already in service. The Perry class appeared under-armed, but in fact it was a powerful ship that could fire a medium-range SAM or Harpoon. The large hangar could accommodate two LAMPS multimission helicopters. This gave the Perry class significant capabilities in all three major warfare areas. Since its principal gun was only a single 76mm mount, the class lacked a shore bombardment capability, but the lack of a 5in gun resulted in significant weight and cost savings. The ships were valuable ASW platforms with their towed sonar arrays and two helicopters. Most were retired prematurely from the USN after the Cold War, but many of these Perry-class units remain in service around the world today.

Though focused on ASW, USN Cold War frigates were capable of a variety of missions and saw service around the world conducting patrol, presence, and even combat missions off Vietnam. In wartime, it was intended to operate USN frigates under the air defense umbrella of other fleet elements and to hunt Soviet submarines as part of a coordinated network of sensors, aircraft, and ships. It is interesting to compare the mainstay Knox and Perry classes to the most numerous frigate built by the Soviet Navy during the Cold War, the Krivak class. A total of 32 Krivak I and II class frigates were built making them much less numerous than comparable USN frigates (the Soviets did build a much larger number of light frigates, but these were not capable of sustained open ocean escort operations). The Krivaks were smaller ships but were nominally multimission capable as they carried four long-range ASW and antiship weapons (with no reloads) and a point-defense missile system. They were inferior ASW ships compared to USN frigates as the USN ships carried better sensors and embarked one or two helicopters (Krivak I/II ships carried none). Fortunately, the USN’s Cold War frigates were never required to perform their primary wartime mission. Acting as part of the overall USN and Allied ASW forces’ effort, there is reason to assess that these ships could have performed their wartime mission effectively.

US Navy Frigates of the Cold War publishes 24 June. Preorder your copy today!