This week Joseph A. McCullough talks us through the new Bestiary for his upcoming game, Stargrave: Science-Fiction Wargames in the Ravaged Galaxy, publishing in April 2021.

Tabletop miniature games are an excuse to buy, paint, and collect miniature figures – at least they always have been for me. That’s the main reason my games tend to have big bestiaries – so I have an excuse to get more cool miniatures! In truth though, writing the Stargrave bestiary was one of the hardest parts of the book.

Back when I wrote Frostgrave, the bestiary was easy. A lot of the creatures – the undead, demons, and constructs – needed to be there as they were an integral part of the spellcasting structure of the game. Most of the rest of the creatures were drawn from classic European myth and folklore. Stargrave, though, didn’t have that same kind of starting point. Robots and pirates needed to exist for the rules and background, but aliens… Sure, there are some classic tropes to be drawn upon but, with a whole galaxy to play with, I had a blank slate and a justification for any creature you could imagine. This lack of restrictions and of a clear starting point proved difficult.

Eventually, I decided to think about types of creatures that might exist on multiple planets, either because they could somehow travel between them or were likely to be purposely or accidentally brought with settlers. That got me a giant bug, a weird space worm, a hairy rhino, and more. Then, I went to my friends, and just asked, “what kind of aliens would you like to see in the game?” This got me some more good ideas!

Anyway, the book is going to include a good selection of weird alien creatures – some of which are needed for specific scenarios, some of which are just there for the random encounter table or to give players tools for creating their own scenarios.

Of course, the bestiary in the rulebook is only the beginning. I’m already working on more creatures for supplements, and I’m hoping that players will invent their own as well – with a whole galaxy to play with, you can now justify buying just about any miniature. I mean, whatever it is, it has to exist on some planet somewhere, right?

Here’s a look at one of the robots that will be appearing in the bestiary: 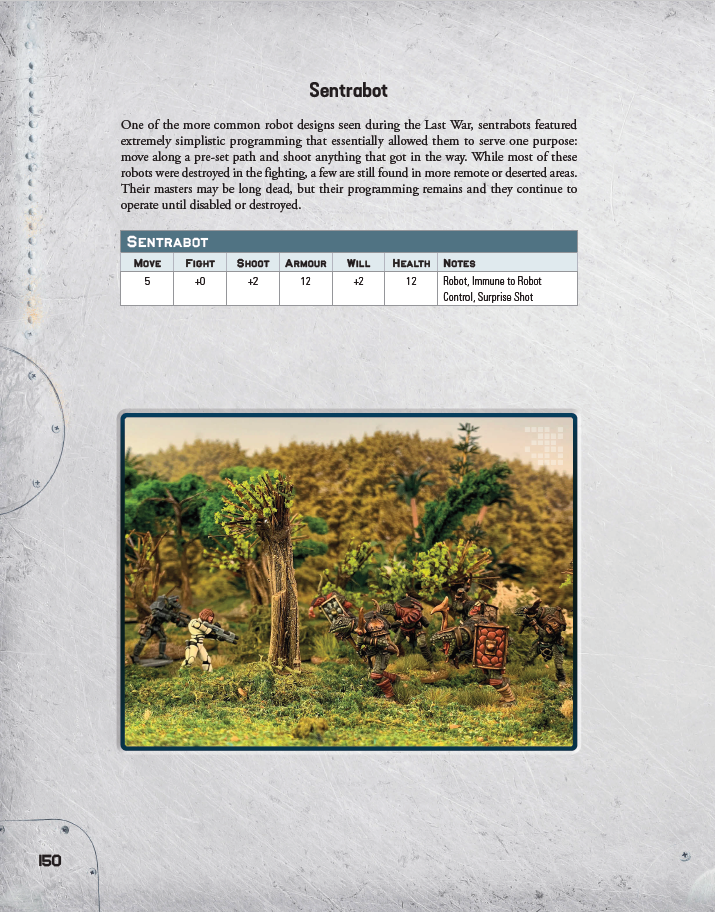 Preorder your copy from your Friendly Local Gaming Store or preferred retailer.

Find out more from Joe at his blog (http://therenaissancetroll.blogspot.com/)