Today on the blog we’re looking at the Utopians, who are entirely fictional, and are a very different deck with a host of unique strategies for players to explore. We’ve taken the idea of Shangri-La from James Hilton’s novel Lost Horizon and combined it with a mythical civilisation of monks who are on a journey to reach this mystical destination. 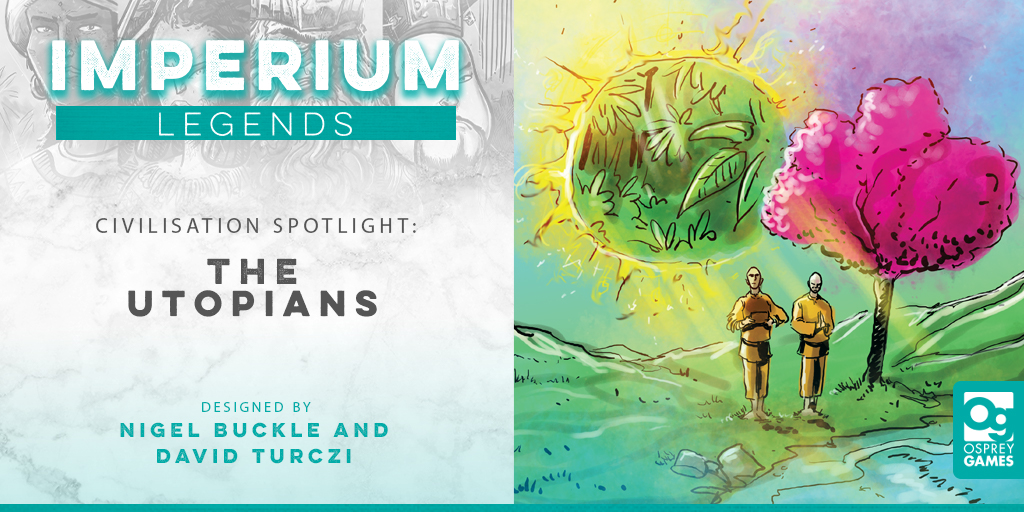 We consider the Utopians to be the most difficult civilisation to play in Imperium (difficulty rating 5 out of 5). This is because the approach to success with this deck is unlike any of the other factions in the game. Furthermore, you need to adapt the deck and your market purchases based on the civilisations you are facing, which requires a good understanding of other factions in Imperium.

The first thing to notice with the Utopians is that they do not have a nation deck, nor an accession card, nor development cards. All they have is a deck of 13 starting cards, a power card and two double sided journey cards. You should carefully look through all these cards before playing the Utopians.

The Utopian power card has a negative effect on both sides. Every time your deck is empty you take an unrest. This means you do not want to add individual cards back to an empty draw deck. Rather, you really want to empty your deck as you are drawing cards, so you gain an unrest but have a full draw deck.. This means, unlike all the other civilisations (with the possible exception of the Arthurians), you do not want to hurry through your deck. Instead you should hold cards in your hand and set up a situation to use them for maximum effect. Furthermore, you should avoid thinning your deck too much, and only put cards into your history or as a garrison if you have no other choice, unless you are building a deck that can easily manage unrest.

Your power card gives you victory points for your population, and gathering population is definitely part of most Utopian strategies. The A side also gives you a boost to this with a solstice ability that helps your opponent’s deal with unrest while gaining you population. This is already showing the “friendly” side of these enlightened monks. When playing against the Utopians, you don’t mind getting their help as an opponent, but you have to be careful not to help them along their journey too much.

Alongside your power card you start with the first journey card, Visions of Shangri-La. You need to gain and spend sufficient progress (which thematically represents wisdom, inner peace, or literal progress along your journey) to flip this to the reverse side, named Path to Shangri-La, and then onto the Gates of Shangri-La, and finally Shangri-La itself. Reaching that final destination is a game end trigger.

Each journey card functions like an extra power card, providing you with options and solstice abilities. This changing journey card is another challenge for players to master. 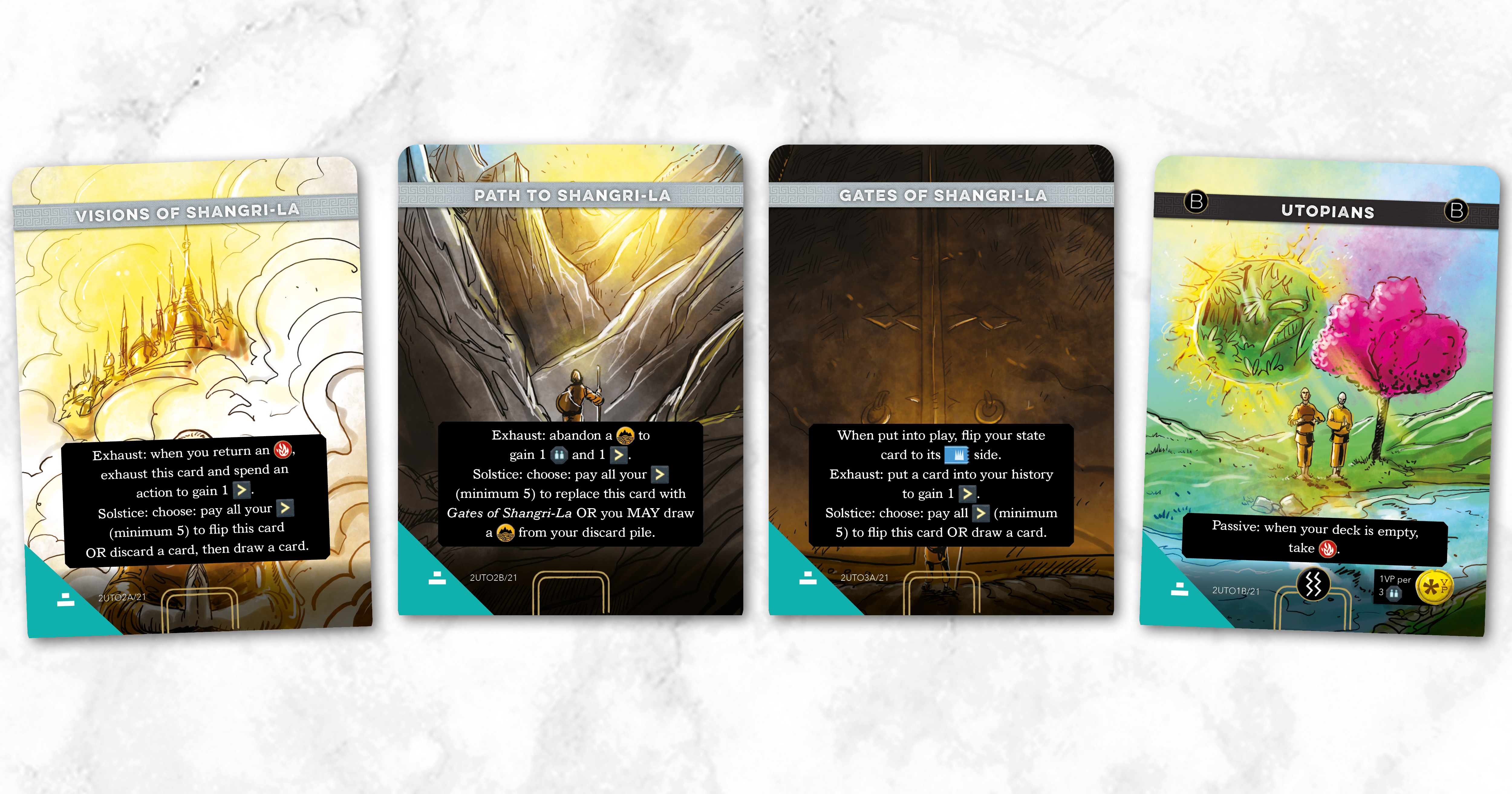 Another unique aspect to the Utopian deck is the 5 sacred scroll cards. It is unlikely you’ll want to play these for their action, as drawing cards is not generally a priority for you. You actually need these scrolls to power your other cards..

Portals lets you acquire regions (by magically teleporting to them using your scrolls), but, as all things with the Utopians, it is not quite as simple as that. In the solstice phase you must recall (take back into your hand) a played region or abandon the Portals card itself! You might be happy to discard the portals for the population gain, or you might be happy to recall a region if it has a useful ability when you play it. Either way you have a difficult decisions to make in the solstice phase, as well as during your turn.

Another example is the Tree of Knowledge. You can use your scrolls in combination with this card to acquire civilised and uncivilised cards, but during the solstice phase you have to discard a card from your hand or abandon (discard) the tree of knowledge.

These pin cards are unusual because they are activated by your sacred scrolls. However, that is not the strangest aspect of these unique cards - using them is an exhaust ability rather than an action. This means when playing the Utopians you will often have more actions than things to do. You may be completely happy to just use those spare actions to remove all the Unrest that you’ve gained through the various earthly temptations that you must face during play.

An additional and related challenge to playing the Utopians is that you only have 3 Exhaust markers, rather than the usual 5. Were it not for this limitation, a lucky hand would allow you to choose how to spend more than double the actions other players have. Instead, you will discover playing the Utopians is a constant series of hard choices for using your exhaust abilities.

Abandoning the Tree of Knowledge, Portals, and cards like them is not as much of a drawback as it might seem, as you can always use your Meditation card to return one of them to the top of your deck. 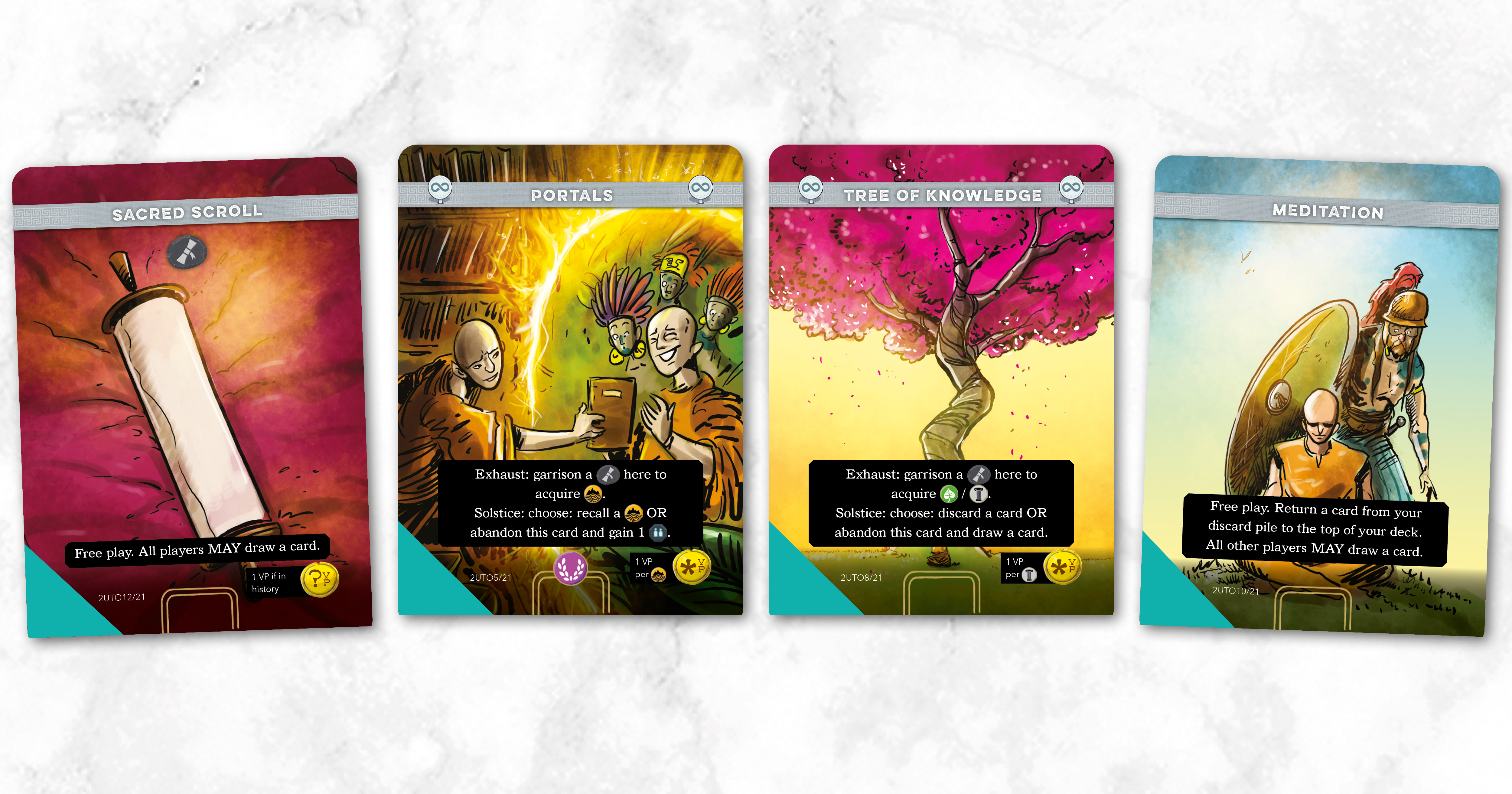 The key to success with the Utopians is hand management and careful selection of the market cards you acquire – any that provide population or progress are very welcome, and some of the end game scoring cards can help boost your final score too. There is no point racing to Shangri-La if you do not gather sufficient points as you go, but equally you do not want to delay too long with collecting unnecessary trappings of power or Fame. Remember, rather than developing a civilisation, the Utopians are on a journey, and the path is just as important as the final destination.

You can journey with the Utopians in Imperium Legends. What route will you take?