Today on the blog we’re looking at the Minoan civilisation. This island empire flourished from around 3000 BCE to 1400 BCE on the Aegean Islands and in particular Crete. 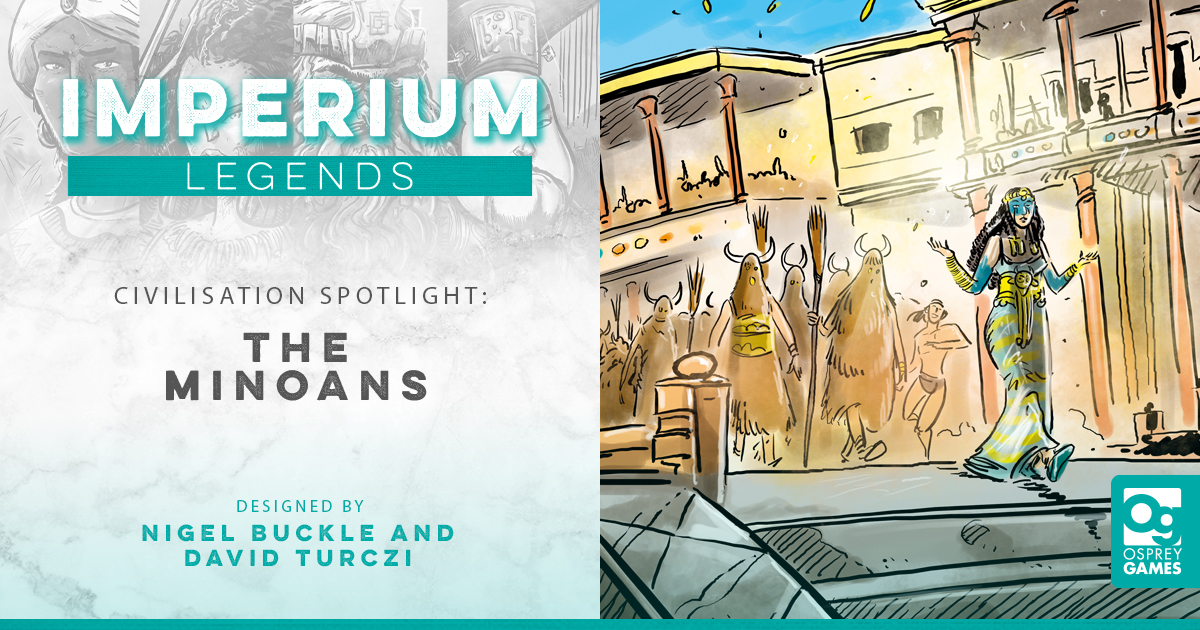 While the Carthaginians focus heavily on materials and the Qin Dynasty focus on population (both covered in earlier blog posts), the Minoans focus on the third resource type: progress. Progress is an abstraction of cultural might, influence, and inventions; a measure of how “ahead of its time” a civilisation is and the impact it has on neighbours and civilisations that followed it.  The Minoans are traders and architects, and their deck reflects this. They take their name from their mythical king Minos, who features as their accession card – the card that triggers your change of state to empire. When you play King Minos you can immediately develop, getting a head start on customising your nation further, and get one much-needed progress to assist you. This is because the majority of the Minoan developments require you to spend progress, along with the other resources of materials and population, but we are getting ahead of ourselves.

A key early game card is Pottery. Every solstice, you’ll need to decide whether to spend two materials to place a progress on the card, or to abandon (discard) the card and claim all the progress placed there. Moreover, Pottery has a barbarian icon, meaning you can no longer play it once you become an empire – but it can still accumulate progress! How to secure the resources to power your Pottery, and when to claim the progress it’s generated, are going to be important decisions to consider when playing the Minoans.

Knossos is another key card, that you will gain before becoming an empire. As a metropolis, this is a significant improvement over the standard cities that many nations possess; during the solstice phase you can use Knossos to gain some resources at no cost or draw a card. Drawing more cards increases the options you have and also means you can afford to hold cards for a turn or two waiting for the right conditions; such as collecting unrest to then return them all in one go by taking a revolt turn. 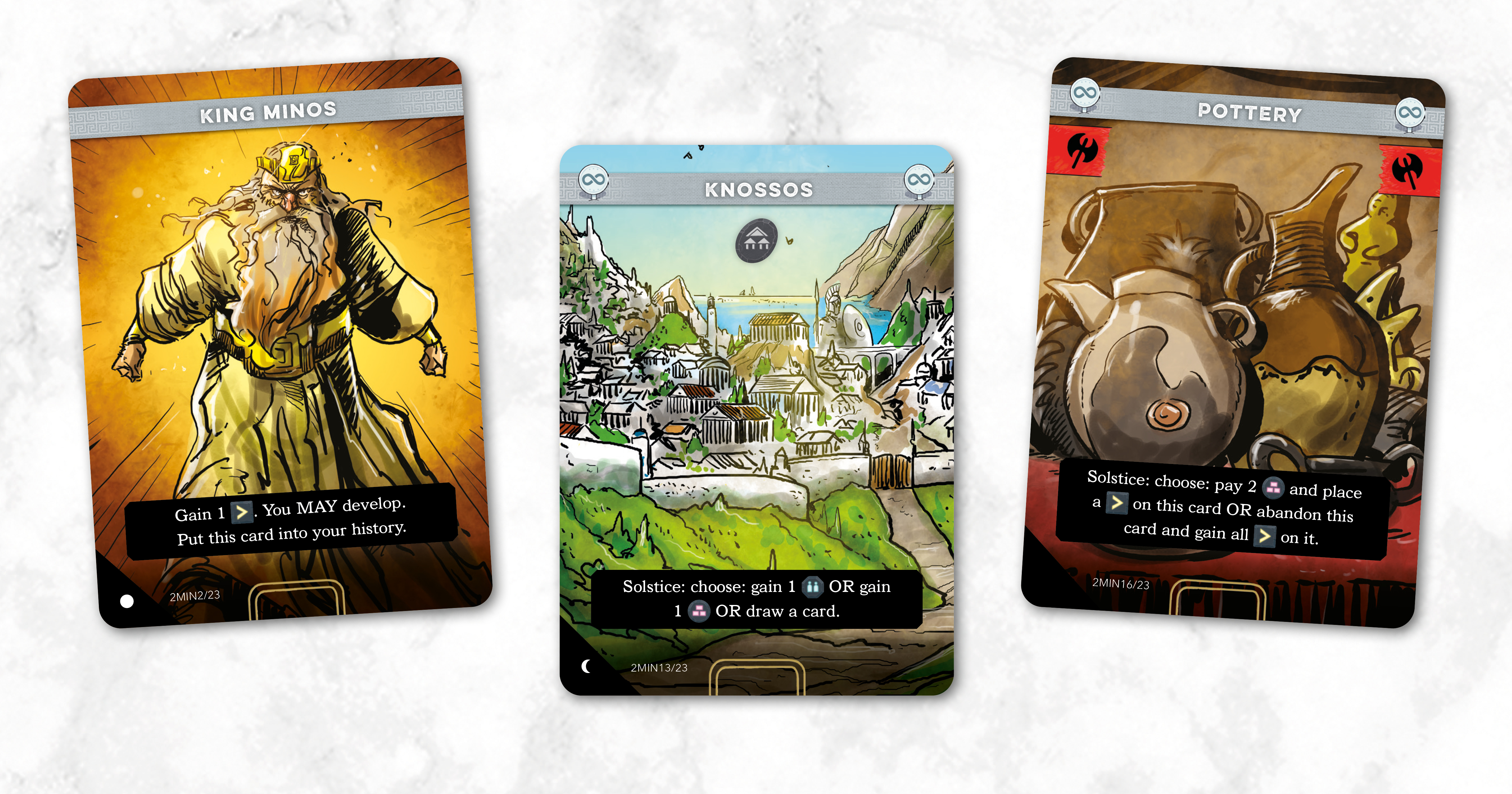 Once an empire, the Minoans have seven developments for you to consider when designing your strategy for victory. You are probably going to want to prioritise gaining Architecture, as this card then gives you a one progress discount on other developments. After that you could develop Frescos to generate more progress, or follow the legend and build the Labyrinth. However, if you do that you will want a steady supply of population to send into it; the Minotaur is demanding, after all!

If you have managed to acquire additional cities, you could utilise your Minoan Traders as another source of progress. Whichever route you pick you should always keep an eye on the market and acquire a card that others have loaded with those valuable progress tokens, even if it ends up garrisoned or moved, forgotten, into your History unused. 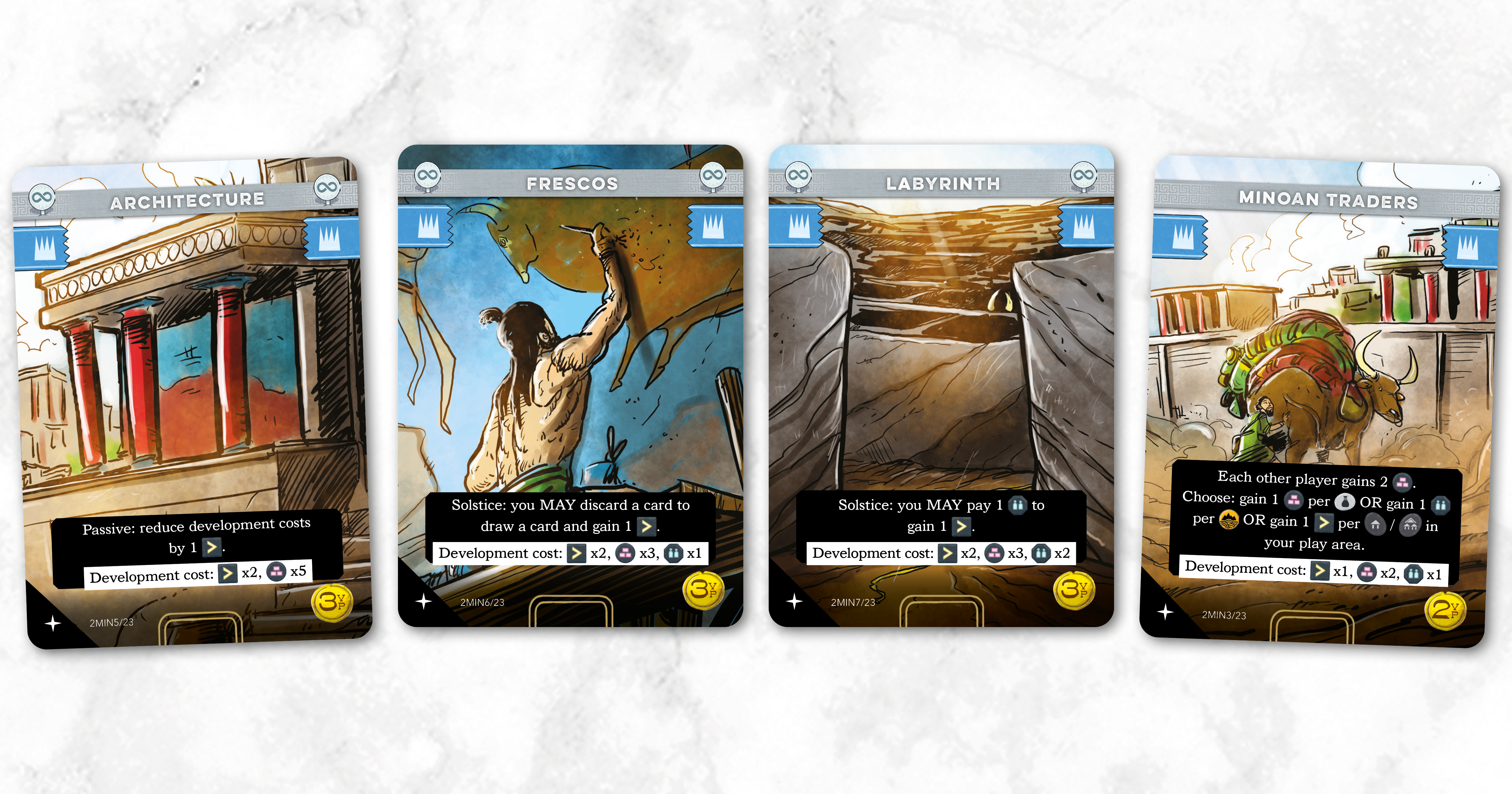 Read more about Imperium on our other spotlight blogs:
The Carthaginians
The Egyptians
The Persians
The Mauryans
The Celts
The Qin Dynasty
The Romans
The Macedonians
The Olmecs
The Scythians
The Atlanteans
The Arthurians
The Vikings