Today on the blog we’re looking at the Maurya Empire (322 BCE to 184 BCE) which was the largest empire to exist on the Indian subcontinent extending over 5 million square kilometres. 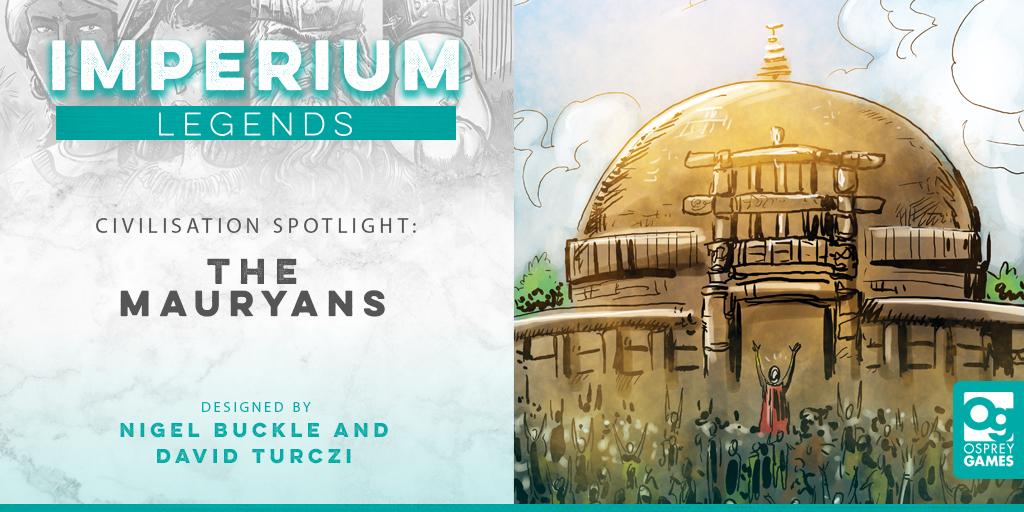 Key cards in your early game are two important figures in Maurya history: the founding leader Chandragupta, who gets your Indian Elephant strategy started, and his teacher Chanakya. It was Chanakya who wrote the ancient political text Arthashastra, and in the game the Chanakya card fetches Arthashastra for you.

A typical Mauryan strategy is using these two leaders to accelerate your advancement to empire, using your Indian Elephants to disrupt your opponents and gain territory, and Arthashastra to utilise any unrest you suffer by discarding it in the solstice phase to gain progress. If you’ve been following this blog series, you will notice that the Indian Elephants’ gameplay effect is almost identical to Carthage’s Elephants (found in the Classics box), but unlike that one, it does not require you to be an Empire to use.

It is worth mentioning the solstice phase: this occurs after all players have taken a turn, and in it each player simultaneously resolves any solstice effects they have available. They are all non-interactive and put here to avoid slowing down any one player’s turn. We mostly used this phase for upkeep and income style effects, but the Maurya deck is also well suited to deal with Unrest over time this way. 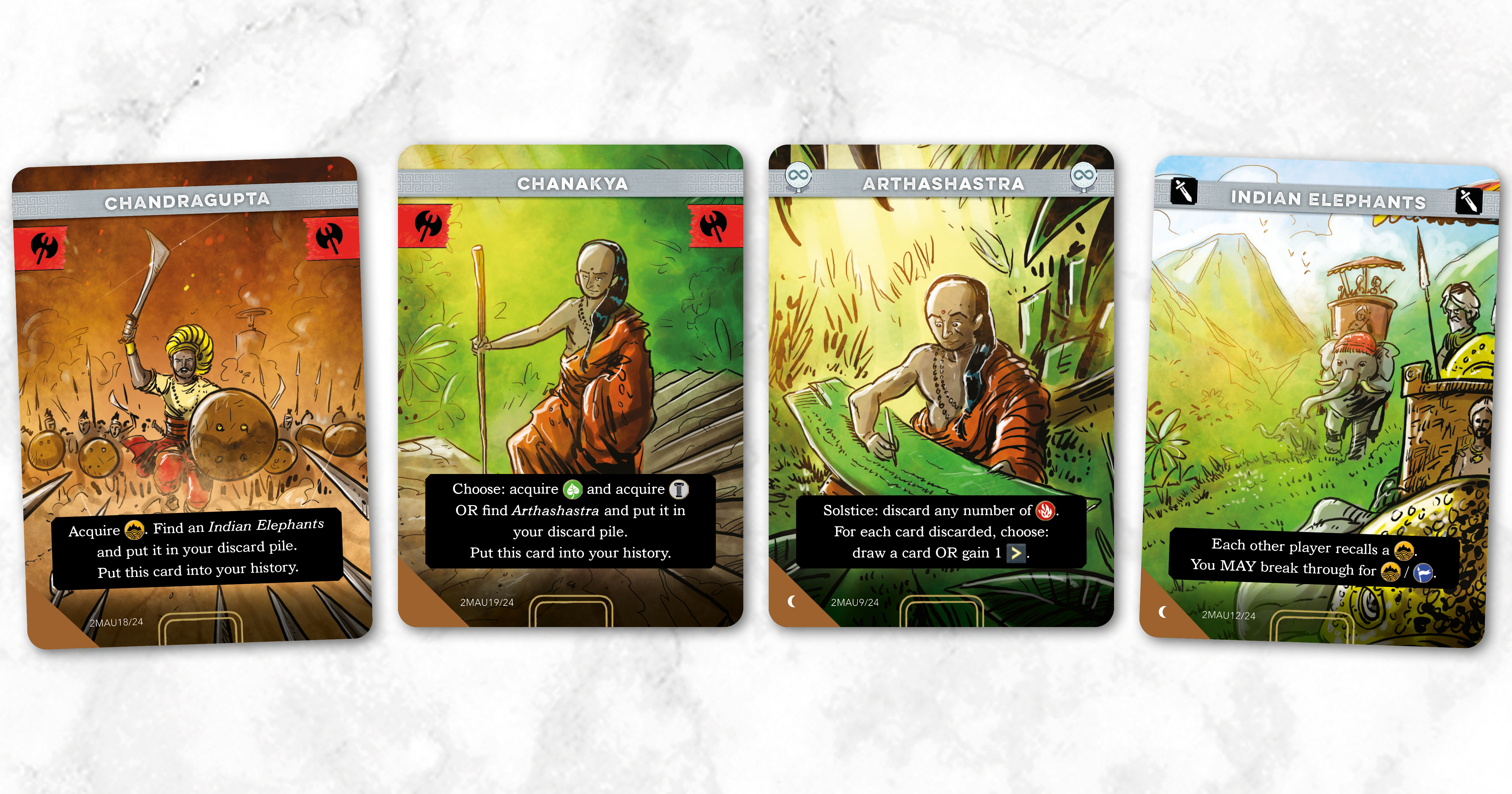 As an empire you have several strategies you could deploy to lead you to victory. You could develop mathematics, which allows you to continue to use your barbarian Advance card to acquire valuable culture cards from the market (a card they share with another ancient eastern empire, the Qin dynasty). You could continue your conquests with your Indian Elephants and develop the Grand Trunk Road; this region is unique in that it counts as two, making it easier for you to play Glory to gain Fame. As a reminder, Glory is a card found in most nations’ decks that allows you to tear down your tableau of regions to gain high value Fame cards. This represents military conquest and further exploitation of the lands under your banner.

But as the enlightened commander of the Mauryans, you could instead become pacified and let your most famous emperor Ashoka lead you, who can gain Fame by putting your violent past behind you – along with all your attack cards into your History. 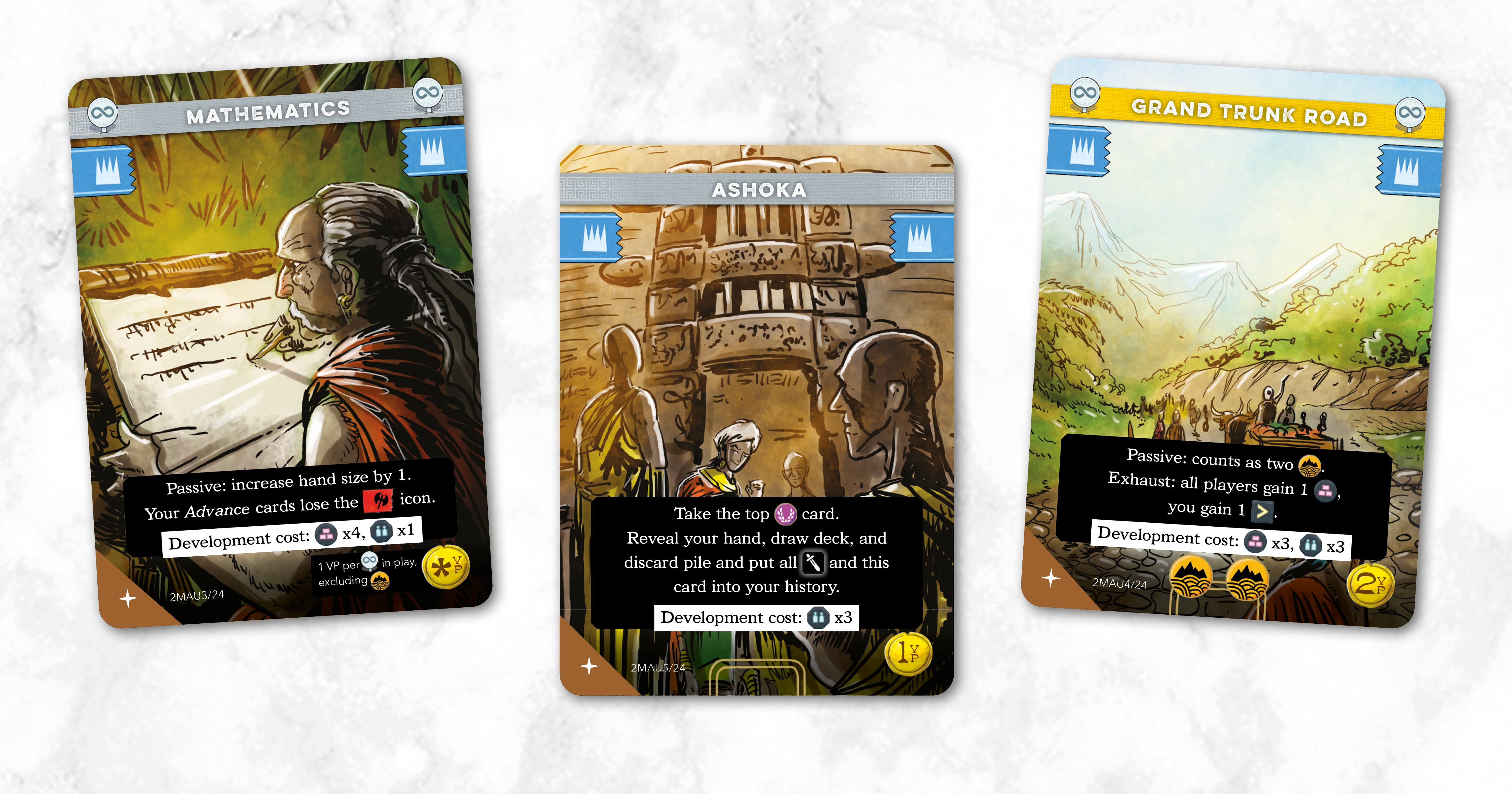 Read more about Imperium on our other spotlight blogs:
The Carthaginians
The Egyptians
The Persians
The Celts
The Qin Dynasty
The Romans
The Macedonians
The Minoans
The Olmecs
The Scythians
The Atlanteans
The Arthurians
The Vikings