Today on the blog, we are going to go through an example starting turn for the Macedonians. Using a possible starting hand, we’ll go through some of the options you would have available. This should give you a general sense of what is going on in the game, without going into all the intricacies of the rules.

In our example turn, the common market looks like this: You always start the game with three materials, two population, and one progress. Below is your starting hand: 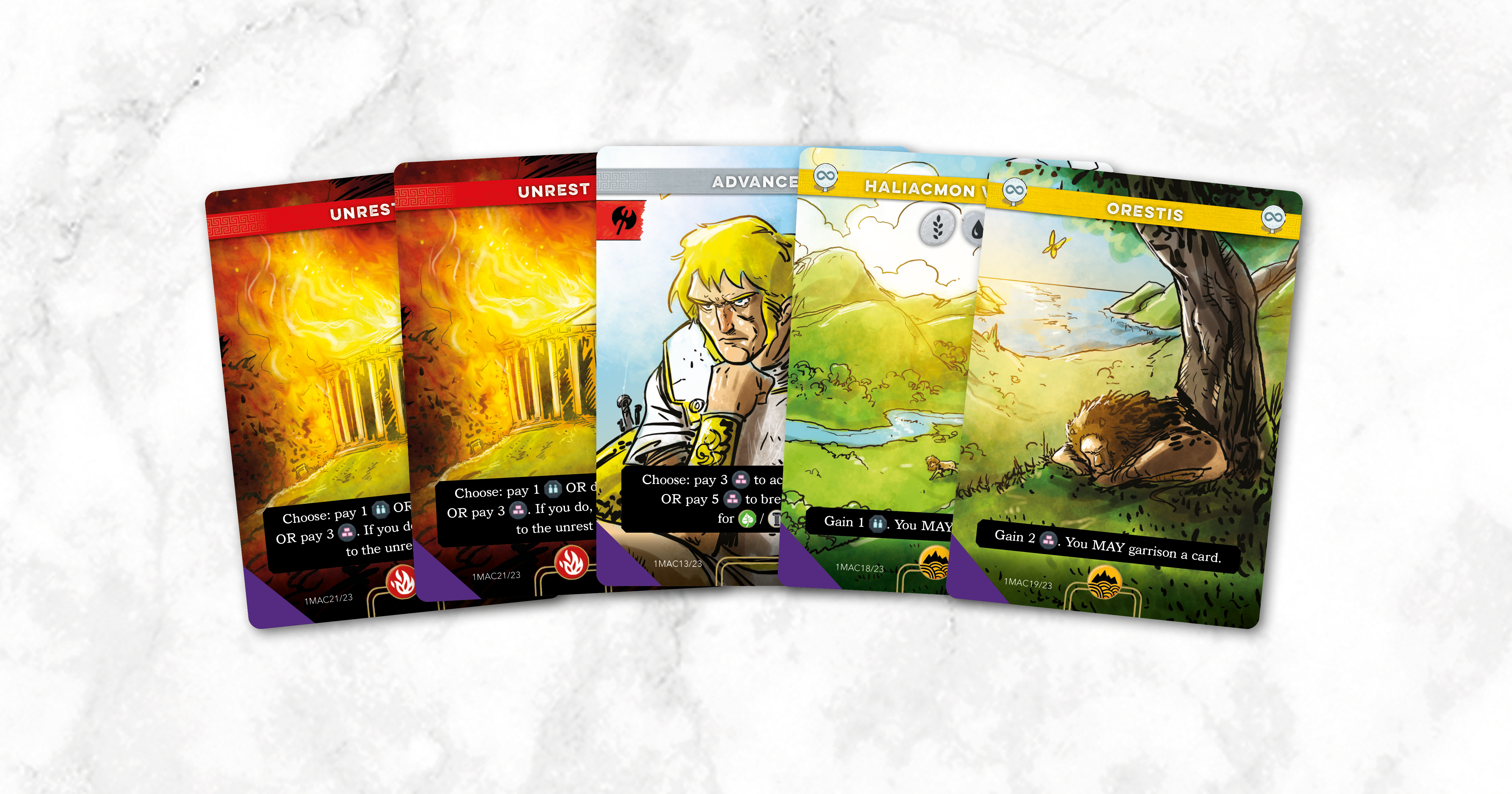 You’re playing with the B-side of the Macedonian’s power card (as is recommended in your first game), and so you do not have a faction-specific special ability to worry about – just a unique scoring objective to keep in mind later in the game.

Like most factions, the Macedonians start the game as a barbarian state and have five exhaust tokens and three action tokens available. Each turn in Imperium you can either Activate, Innovate, or Revolt. Activate turns are by far the most common. On an Activate turn, you’ll get to take three actions (such as playing a card from your hand) and use up to five exhaust abilities on cards in your tableau. On a Revolt turn, you instead get to return all unrest in your hand to the supply. On an Innovate turn, you instead get to take one card from the common market.

In this example, you could take a Revolt turn to return the two unrest cards in your hand to the supply. However, if you chose to Revolt or Innovate, you don’t get to take any other actions or use any other abilities. Let’s try to do better!

Looking at the common market, the Port card looks appealing, as you have already have the Haliacmon Valley in hand, which has a water icon. The Forest also looks promising, with its two production icons and one fertile icon. The Mercenaries could score highly at the end of the game if you have a large population. However, it’s an empire card, and, as you are currently a barbarian state, you won’t be able to play it for a while. The Oracle is also interesting – drawing cards for free is powerful, and the scoring condition has a very high upside if you acquire a lot of fame cards. The other card, the Sumerians, is less interesting as it is most helpful for final scoring, which is a long way off.

Because of the Haliacmon Valley card in hand, you decide you are most interested in the Port. You could take an Innovate turn and take it. However, you can accomplish that and more by taking an Activate turn, so that is what you chose to do.

So, looking back to your starting hand, as an action, you could play your Advance card, paying three materials to acquire the Port with the unrest card under it. Alternatively, if you could get a couple more materials, you could instead break through for the Port, which means you would avoid taking the unrest.

You can get those two materials by playing the region Orestis. You could then Advance, breaking through for the Port, and then play the Port. However, you would then not have enough actions to play the Haliacmon Valley this turn, which means you could not utilise the Port’s ability. So, you decide to skip playing Orestis.

You play the Advance card, removing one of your action tokens from your power card as you do. You pay three materials and take the Port and the unrest card under it into your hand. You then reveal a replacement card for the market, which is a Mountain region. You then play the Port, removing your second action token, and finally play Haliacmon Valley, removing your third and final action token. As both these cards have the pin icon, so they will stay in your tableau in front of you indefinitely.

You’ve now taken all your actions and you have the following cards left in hand. When you played the Haliacmon Valley you could have garrisoned a card. When you garrison a card you take it from your hand and place it face up under the region card. This gets the card out of your deck, though it will still score at the end of the game, and if the region card is put back in your hand or discarded for any reason the garrisoned card goes with it. However, in this case you choose not to.

You have three population and one progress left, and you have both Port and Haliacmon Valley in your tableau. While you have used all your actions, you still have exhaust tokens available, and you now have access to an exhaust ability on a card in your tableau –  your Port. To use it, you move one of the exhaust tokens from your state card to the Port to show you are using this ability. Resolving the card’s exhaust ability, you look in your tableau and see that you have one water icon, so you gain one material. If you’d had three materials, you could also have retrieved a card from your discard pile as part of this ability as well.

With your Activate turn done, you start clean up and decide where to put a progress token from the supply on to a market card. You could put it on a card you want and hope your opponent does not take it, or on a card you are less bothered about, to direct your opponent’s attention elsewhere. You put the progress on the Sumerians because you think the card is not that powerful in the early game. Once you’ve decided, your opponent can start their turn, while you remove the exhaust marker from the Port and refresh your state card back to three action tokens and five exhaust tokens.

If there are any cards left in your hand during clean up, you now choose whether to discard them, or keep them in hand for next turn. You could discard the three unrest, and plan on taking an Activate turn with the new cards you draw. However, you think you might want to be more proactive about removing the unrest, and plan on taking a Revolt turn next round. To this end, you discard Orestis and keep the three unrest cards. You then draw back up to your hand size of five, hoping to draw as many unrest as possible.