The upcoming Campaign title The Balkans 1940–41 (2) is a concise yet detailed overview that gives a balanced account of this key Blitzkrieg campaign in the Balkans during the opening years of World War II. On the blog today, author Pier Paolo Battistelli gives an overview of this campaign and shares how this fantastic title came about. 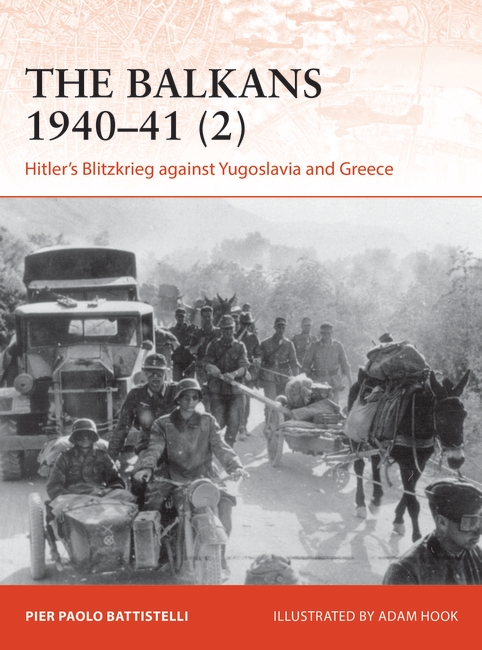 For some particular reason, the 1941 Balkans campaign has always fascinated me, even more so considering that it is an often overlooked subject. There is a reason why the campaign can be described as Hitler’s forgotten blitzkrieg in the Balkans: historians have mostly focused on the impact it had on Operation Barbarossa, and neglected the campaign itself. As a result there are very few accounts of the German invasion of Yugoslavia and of the battle for Greece, even more so if we take into account the many accounts written of the Battle of Crete.

Still, the 1941 Balkans campaign was a very important one, and it had long-lasting effects. Yugoslavia may have been defeated quite easily in 1941, but the swiftness of German action and the lack of any real mopping up of what was left of the Yugoslav Army after its surrender created the premises for the future insurgency, and for the vicious anti-partisan warfare in the area that lasted until the end of the war. The same may be said about Greece, even though in this case Hitler himself ordered the release of all Greek prisoners of war and put the Italians and the Bulgarians in charge of the occupation of most of the country. This in itself was more than a good reason for the rise of the Greek partisan movement in 1942.

Yugoslavia and Greece certainly imposed a delay on Operation Barbarossa, even though a minimal one, but it is also important to remember that in 1943 Germany deployed a large number of units in the Balkans, given Hitler’s concern that the Allies might land there after the defeat of Italy. In one way or another, the Balkans always had a main role to play in the strategic game of World War II.

The campaign itself is also well worth an examination. The only chance the Allied forces had to repeat the ‘miracle of Salonika’ of World War I vintage was to join forces. This meant that the Yugoslav Army had to withdraw south across the Florina Gap, to join the Greek Army and the British Expeditionary Force. As it happened, the Allies did their best to facilitate the Wehrmacht. The Yugoslav Army deployed all along the country’s borders, splitting its forces, while the Germans were able to focus theirs against specific targets. This was not only a strategic mistake, but also a necessity: the Yugoslav Army lacked mobility, and the country’s poor communications infrastructure did not permit any strategic redeployment to deal with an enemy attack.

The Wehrmacht thus had a rather easy task dealing with isolated forces, which all too often lacked speed and manoeuvrability on the battlefield. The only force capable of dealing with them on an even footing was the expeditionary force made up of the Australian 6th and the New Zealand 2nd divisions, plus a British armoured brigade too weak to effectively oppose the Panzer Division. Still, that did not mean the Wehrmacht always had an easy passage. The attack against the Greek ‘Metaxas Line’, built on the Greco-Bulgarian border, turned into one of the fiercest and bloodiest battles fought during the entire campaign – the Greek soldiers, well under strength and lacking modern weapons, resisting the German assaults more than the French did when the ‘Maginot Line’ was attacked in 1940.

What followed, the British and Commonwealth forces withdrawing south and the Germans pursuing, is also an epic campaign. The Australian and New Zealand troops fought skilfully and with determination, repeatedly preventing (or at least delaying as long as necessary) a German breakthrough. This resulted in the eventual Allied embarkation and final withdrawal from Greece, even though a good many soldiers who managed to escape would end up fighting another fierce battle on Crete – and escaping once again!

The work done on the Campaign was greatly enriched by Marc Romanych of the Digital History Archive, whose researches at the American National Archives and Records Administration brought to light a series of photographs which enable us to follow the German advance into Greece from the ‘Metaxas Line’ to Salonika, down to Athens. These photos, taken by German war correspondents, are not only of good quality but also in many cases have never been seen before, and I am sure that many readers will enjoy them just as much as I did. Thank you Marc!

Other friends helped with this work. The late Raymond Grover from New Zealand is a friend common with my good friend and colleague the historian (and retired New Zealand Army officer) Christopher Pugsley, to whom my thanks also go. My close friend from Salonika Minas Laggaris also provided great help, and it is very sad for me to have to say that he too is no longer around to see the final product of our efforts. Thank you, my friends!

On a happier note, I do hope the readers will appreciate my work on the 1941 Balkans campaign, a title that will fill a gap given the absence of other titles on the subject – at least at an affordable price! I hope it will help to remember and understand a campaign that, albeit forgotten, was of great importance and was also fought with determination by all those involved – a detail that should not be underrated.

A final point: we need to remember those ‘small’ armies that we tend, all too often, to forget. The Yugoslav Army might have collapsed in 1941, still it was to provide the backbone of Tito’s partisans whose fighting capabilities cannot be underestimated. The Greek Army proved its valour on the battlefields, first against the Italians then against the Germans, in an unprecedented way. Largely outnumbered and lacking modern weapons and equipment, it fought to the last with a courage, skill and determination hard to find in the armies of other small countries. A final word goes to the soldiers who came from the other end of the world to fight in Greece: the Australians and the New Zealanders. On many occasions, from Egypt to Greece, to Crete and Libya, Tunisia and eventually in Italy, they fought with determination and bravery in a war some might say did not belong to them. Nevertheless, for years the Australian and New Zealand units (along with the Indian Imperial Army) provided the backbone of the British Eighth Army in the Mediterranean and helped make it the famous army it still is today. Their efforts and sacrifices should not be forgotten.

My concluding thought goes to the series editor Nikolai Bogdanovic, whose skills are beyond description. It is thanks to him that I eventually realised how important the role of an editor is, especially in such a complicated, multi-tasking work like an Osprey Campaign. While enjoying this new title (I hope at least!), stop for a moment to take into account the work involved: putting together all the information needed, working on the maps (especially on the Bird’s Eye View ones), choosing and re-choosing the photographs, so that they match the text and are not, merely incidental On behalf of all authors, thank you Nikolai!