Heirs to Heresy is a love letter to classic adventure roleplaying games, historical fantasy, and one of the most enduring myths and conspiracies of our modern age, and, as such, every element of the game needed to evoke those themes and ideas. It’s ambitious, but I’m exceptionally proud of the high-quality game we have put together.

From the initial pitch, the game was always present with a bespoke system, something crafted to be complementary to every element of the game. Templars in this world are hyper-competent warriors, skilled with weapons, trained through faith to resist fear, and able to complete arduous tasks. The rules needed to compliment that.

When the Templar character undertakes a risky, dangerous, challenging action or the potential for failure is both interesting and good fuel for the narrative, they make a test. At the test’s most basic, the player rolls two ten-sided dice, sums the total and adds their Attribute and Skill opposed to a Difficulty. (2d10+X+Y vs DIFFICULTY). If they equal or exceed the Difficulty, they’re successful (Difficulties range from 12 to 27.) Any result of doubles on the 2d10 on a successful test results in a critical (and nets the Templar character an Advancement Point – more on that later.)

Grand Masters (GMs) have the ability to adjust the difficulty of tasks in two ways: by increasing the Difficulty (or TN for target number) or by applying advantage and disadvantage to the test. Generally speaking, it is easier to quickly adjudicate advantage and disadvantage at the table than worry about adjusting difficulties. Advantage lets the Templar character roll 3d10 and keep the two most beneficial (their choice) and Disadvantage forces them to roll 3d10 and keep the worst options (the full text talks about deciding that.)

The twin difficulty adjustment tools allow the GM to quick make calls on the fly with ad hoc Advantage/Disadvantage, while the sliding difficulty allows GMs to prep in advance with complex  adventures with a variety of challenging difficulties to overcome. 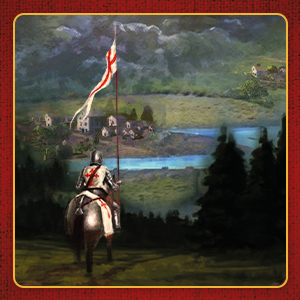 Doubles on the 2d10 portion of successful tests grant the Templar character a critical! If you are in combat, you double your total damage. If you are not in combat, you accomplish the task with a flourish. Perhaps you finish it faster, or you gather more details or information than you expected. It’s up to you and the Grand Master to work out how that plays out, though you should feel free to offer suggestions (though the Grand Master will make the final decision).

Combat in Heirs to Heresy plays out differently from many other RPGs, by changing the baseline assumptions in favor of the Templar characters.

But mobs can be made more dangerous by the inclusion of Fearsome Foes. These are enemies who are on the Templar character’s level (or higher!) and, in additional to being threatening combatants on their own, they can induce nearby mobs to help them attack and threaten the Templar characters. Some Fearsome foes are mundane enemies (enemy knights, inquisitors, or agents of the French King) and some can be otherworldly…

There’s more to combat (Crippling Blows, Conditions, and so much more!), and the game features other rules like Faith, multiple kinds of magic and special abilities, relics, and campaign structure tools to create an engaging toolbox to play around with!

That's it for this week. Make sure to join Alan Bahr next week as he walks us through creating characters for Heirs to Heresy! If you're as excited for the release of the game as much as we are, you can preorder the hardback of the book here before it's release later this month.