The upcoming Campaign title Dien Bien Phu 1954 is a highly illustrated study of the battle at Dien Bien Phu, the 56-day siege that eventually led to the surrender of the remaining French-led forces. This iconic battle provided the climax of the First Indochina War. On the blog today, author Martin Windrow gives a brief overview of this campaign and shares how this fantastic title came about. 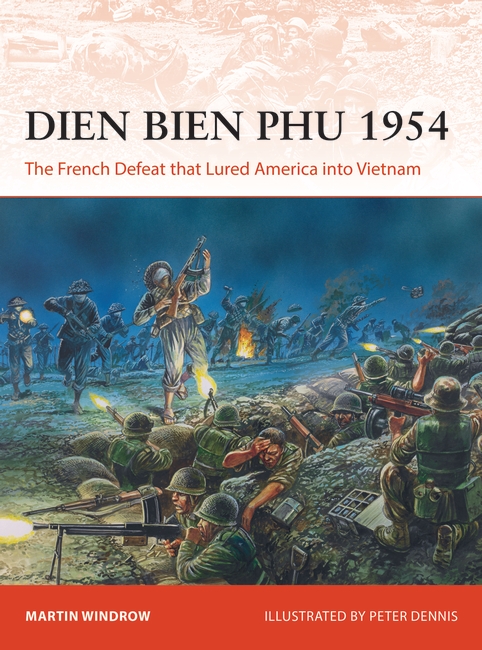 The battle of Dien Bien Phu in 1953-54 was not literally the last battle of France's seven-year long post-World War II effort to re-occupy and retain her Indo-Chinese colonies of Vietnam, Laos and Cambodia, but it was the decisive action. The defeat of the garrison, and of the French Expeditionary Corps' attempts to support them, caused such a traumatic shock in France that national support for the whole war effort collapsed at once, quickly leading to a negotiated peace which saw Vietnam partitioned between the Communist North and a new US-supported republic in the South.

The battle was also the culmination of a process unique among post-1945 wars of decolonization: the steady growth of a nationalist insurgent movement from guerrilla bands into a unified conventional army (albeit one composed of light infantry, with very weak artillery and other supporting arms). Also unique was the massive co-ordinated human effort by the civilian population of North Vietnam that made the siege and assault logistically possible.

I wrote a long book on the war and the battle ('The Last Valley', Weidenfeld & Nicolson) for the fiftieth anniversary in 2004. For several years Osprey had been asking me to consider a Campaign title on 'DBP', but the expense of obtaining photographs had long prevented this. An unexpected solution to that problem more recently made it a practical possibility; and the appearance of a new book on the subject ('Valley of the Shadow', by Kevin Boylan & Luc Olivier, Osprey, 2018) made the idea irresistible. Alongside other new research and analysis, those authors had benefited from translations of a great deal of Vietnamese material released since 2004. This gave me an attractive opportunity to correct errors in my original tome - a chance which is not given to many authors. The corrections lie mostly in the identity of particular People's Army units, and in the 'facts and figures', newly provided by Boylan & Olivier's valuable tables and appendices.

As to the human story of the battle, and my thoughts on various myths propagated by a first generation of commentators, I was already confident that 'The Last Valley' was more or less sound. Although I have been able to meet and discuss their experiences with only a very few veterans of 'DBP', 'The Last Valley' did earn one very generous endorsement. I am well aware that to repeat this is appallingly 'unBritish'; but I cannot resist the boast that one of my most precious possessions is a copy inscribed to me by the now-late Dr Jacques Gindrey, the heroic commander of one of the medical companies flown into the valley before the siege began in March 1954, in which he thanked me for what he was kind enough to call 'the best account of the battle, giving the facts rather than the myths.'

Apart from the great satisfaction of correcting errors, the Campaign title gave me the great pleasure of working with Peter Dennis on his three splendid battle-paintings, which I believe capture the character of episodes in the fighting, and allowed me to indulge my 'inner anorak' in matters of uniforms and equipment. While I naturally hope that it may encourage some readers to seek the much fuller account in 'The Last Valley', I am very grateful to Osprey for commissioning this concise 'capsule' treatment.