The Battle of Culloden, fought exactly 275 years ago today, ended the Jacobite Rising and is undoubtedly one of the most famous battles in British military history. To commemorate this anniversary, we look at the beginning of the battle with an extract from Stuart Reid’s Culloden Moor 1746. 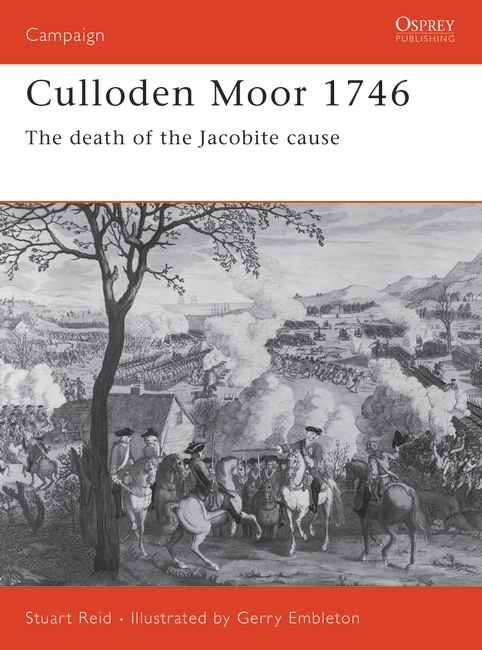 “One of the interesting features of the battle is that in contrast to the rather precipitate way in which both sides set about each other in the two earlier battles, Culloden was characterised by a slow and deliberate build-up and a considerable amount of jockeying for position.

The Jacobite front line originally comprised from right to left: three battalions of the Atholl Brigade (effectively just one large regiment), Locheil’s Camerons, Ardsheal’s Stewarts of Appin, Inverallochy’s Frasers, Lady MacIntosh’s and Monaltrie’s regiments, a small combined battalion of MacLeans and MacLachlans and another of Chisholms, and three MacDonald battalions commanded by Keppoch, Clanranald and Lochgarry. In total there should have been something like 3,800 men besides officers, but all accounts agree that their ranks were severely depleted by straggling and that there may in fact have been several hundred fewer at the start of the battle.

Initially this line was stretched between the corners of the Culloden and Culwhiniac Parks, but Lord George Murray, who commanded the right wing, became increasingly concerned about the obstacle that the protruding Leanach enclosure would create for any advance. Accordingly he advanced some way down the moor and formed the three battalions of the Atholl Brigade into columns in order to better manoeuvre around it. Although in itself sensible enough, this move was carried out without prior consultation and resulted in some considerable dislocation. It is logical to infer that Murray may have intended thereby to change the axis of the eventual attack in a more northerly direction, since this would carry his men clear of the enclosure when charging straight forward, and as the ground falls away more markedly towards the north he may also have hoped that the downhill 60 run would increase its impetus.

At the other end of the line however the Duke of Perth appears to have misinterpreted his advance as a general forward movement for it must have been at this time that the MacDonalds (who hated Murray) famously refused, despite his urgings, to conform by moving clear of the Culloden Park wall. At any rate with the line now stretched along a rather greater frontage between the corner of the Culloden Parks and a point about halfway down the north-west wall of the Culwhiniac Parks (probably the gate shown on contemporary maps) large gaps now appeared and to his astonishment Colonel Sullivan heard cries of ‘Close, close!’ and found ‘intervals, yt he had not seen before’. In the circumstances there was no alternative but to turn to the second line ‘for there was no time to be lost, to fill up the vacansy yt was left (by Ld George’s changement)…’

As it happens there was no second line as such. Instead, drawing on the experience of Falkirk, there were simply a number of units scattered along the rear of the first and deployed in column rather than line in order to act as mobile reserves. Again working from right to left there were two battalions of Lord Lewis Gordon’s Regiment commanded by John Gordon of Avochie and James Moir of Stonywood respectively, the Royal Ecossois commanded by Lord Lewis Drummond, two battalions of Lord Ogilvy’s Regiment, John Roy Stuart’s Regiment, Lord Kilmarnock’s Footguards, John Gordon of Glenbuchat’s Regiment, the Duke of Perth’s Regiment commanded by the Master of Strathallan, and finally the Irish Picquets commanded by Lieutenant-Colonel Walter Stapleton. Further back still were three bodies of cavalry, a composite squadron comprised of Fitzjames’s Horse and Lord Elcho’s Lifeguards on the right; another formed from Bagot’s Hussars, Lord Strathallan’s Horse and perhaps some of Balmerino’s Lifeguards on the left; and finally a small escort troop of Fitzjames’s Horse and Lifeguards with the Prince in the centre.

Sullivan later recalled that he brought forward Perth’s and Lord Strathallan’s Regiments, but must have been confused by the fact that the first was actually commanded by the Master of Strathallan, for the latter was a cavalry unit, and by the time the redeployment was complete Perth’s and Glenbuchat’s regiments stood on the extreme left of the front line instead of the MacDonalds, who ‘by this had no more the left, they were almost in the Center’ and John Roy Stuart’s Regiment had also been sent forward to stand beside Ardsheal’s men.

These movements did not go unnoticed by the Duke of Cumberland and suspecting, probably correctly, that the axis of the rebel assault was shifting further to his right, he responded by bringing forward two of Mordaunt’s battalions, the 13th and 62nd, to extend the right of his first and second lines respectively. At the same time both squadrons of Kingston’s 10th Horse were also brought forward from the reserve to cover the right flank and were then joined there by two troops of Cobham’s 10th Dragoons who had earlier been sent reconnoitring towards the north.

Meanwhile, Hawley had begun moving through the Culwhiniac Parks in order to try to outflank the rebels. This move had been anti-cipated by the Jacobites and initially the two battalions of Lord Lewis Gordon’s Regiment were set to lining the nearest wall, but as the 62 Dragoons prudently remained outside musket range and may have been partially in dead ground, they were soon pulled further back and deployed facing due south behind a prominent re-entrant which covered the army’s rear near the steading at Culchunaig. As the Dragoons cleared the Parks and swung around to deploy into two lines on the open slope below the re-entrant, further Jacobite reinforcements were hurried up. By the time Hawley closed up to it, the crest above was lined by a total of four battalions from Lord Lewis Gordon’s and Lord Ogilvy’s Regiments, and the combined squadron of Fitzjames’s Horse and Elcho’s Lifeguards.

Unsurprisingly, being unable to see what lay behind the crest and perhaps unaware that he had placed himself not on the flank of the rebel army but in its rear, Hawley declined to force a passage across the re-entrant and instead settled down to await events.

As they waited one of Hawley’s staff, Major James Wolfe, recorded that the guns began firing on the moor at about one o’clock in the afternoon. Others thought it began earlier, but although there was no real consensus on the hour there was universal agreement that the rebels opened the cannonade. At the outset of the battle they had 11 guns emplaced just forward of their front line. Some sources suggest that they were deployed in three batteries on the flanks and centre, but Paul Sandby, a draughtsman on Cumberland’s staff, afterwards depicted a group of four on the right in front of the Atholl Brigade: two in front of John Roy Stuart’s Regiment, three in front of Lady Mackintosh’s Regiment and the remaining two in front of the Macleans and Maclachlans. It may be of course that they were initially placed neatly enough but became scattered during Lord George Murray’s ‘changement’. At any rate all of them were evidently 3-pdrs and there is absolutely no foundation for modern suggestions that their efficiency was impaired by the need to service a multiplicity of calibres.

Nevertheless an analysis of British casualty returns suggests that the Jacobite guns killed or wounded only about 20 officers and men. The Royal Artillery by contrast was rather more efficient although its effectiveness has almost invariably been overstated.

After the Jacobites had fired just twice in a ripple across their front, Captain Godwin’s 10 guns (also 3-pdrs) replied. Exaggerated accounts reaching Edinburgh a few days later claimed that the British Army’s bombardment went on for over an hour before the clansmen commenced their attack, but this is palpable nonsense. Understandably subjective Jacobite accounts also suggest that they were fired upon for between 20 and 30 minutes, and most historians have accepted this estimate uncritically. In practical terms however an artillery preparation of such a duration would have severely depleted the ammunition actually up with the guns (40 rounds apiece including the reserve in the park) and by contrast British accounts all record a much shorter bombardment. James Wolfe reckoned it lasted 15 minutes, but unable to see what was going on he was relying on sound alone and his estimate must relate to the whole period between the first of the Jacobite guns opening fire and then the British ones ceasing fire because the cavalry were going forward. Similarly, back with the baggage train Campbell of Airds put its total duration at a very precise nine minutes, but those in a position to actually see what was happening told of an even briefer exchange of fire. Indeed one of Cumberland’s ADCs, Joseph Yorke wrote to his father that: ‘When our cannon had fired about two rounds, I could plainly perceive that the rebels fluctuated extremely, and could not remain long in the position they were then in without running away or coming down upon us; and according as I thought, in two or three minutes they broke from the centre in three large bodies…’”

To read more, order your copy of Culloden Moor 1746: The Death of the Jacobite Cause.