After the historic D-Day landings comes the fight to liberate France and the rest of Occupied Europe. Bolt Action: Campaign: D-Day: British & Canadian Sectors, publishing in late January, focuses on the push inland from the Commonwealth beaches of Gold, Sword, and Juno culminating with the battle for Caen and the Falaise Pocket.

Later this month we're publishing the latest Campaign book for the award-winning World War II wargame Bolt Action, focussing on the British & Canadian sectors of D-Day. Over the next few weeks we'll be helping you prepare your forces, with today's focus on German Grenadiers. 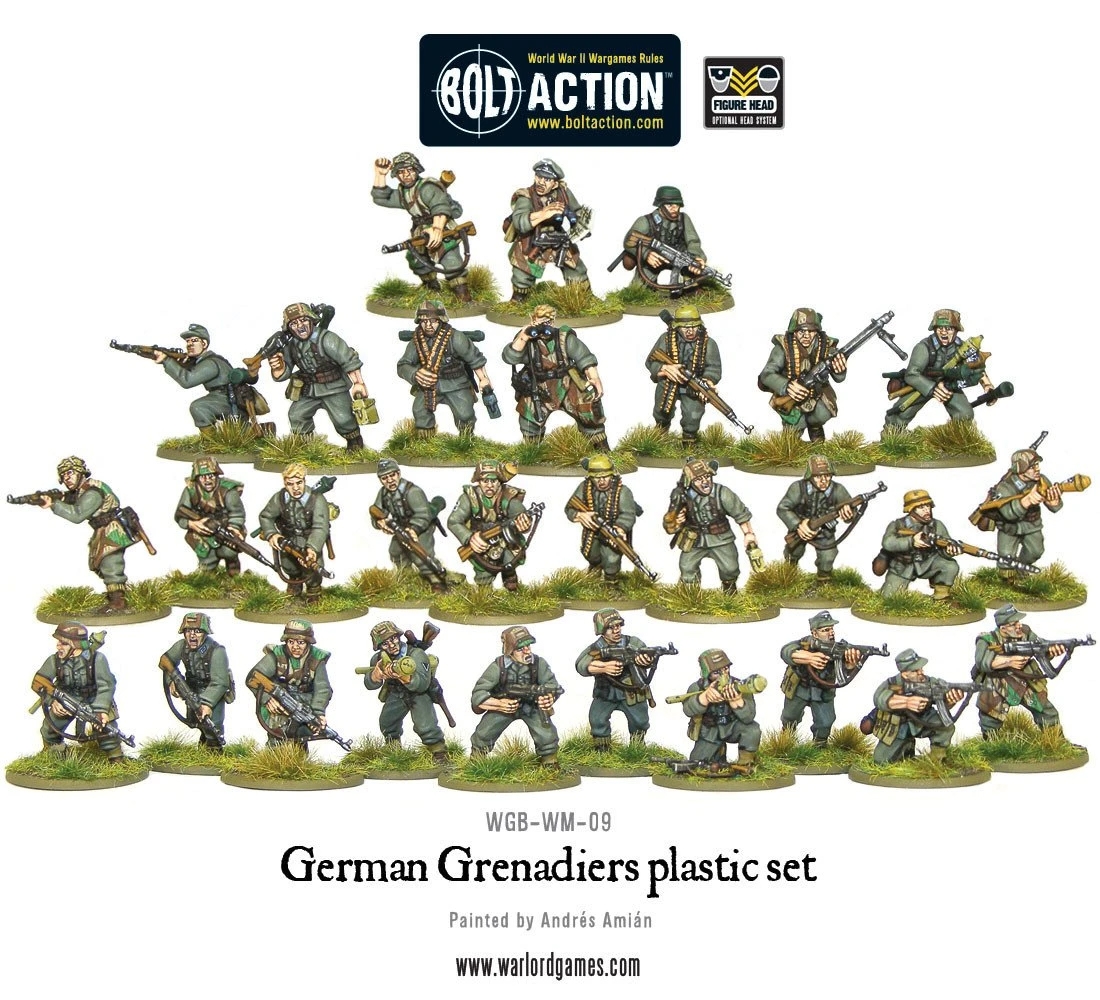 The German soldier was a formidable opponent in World War II. Tough, well-trained and politically indoctrinated they fought on all fronts achieving great feats of arms that only the best trained and motivated troops can accomplish. Daring in attack and stubborn in defence the average German Landser was a dangerous foe for the Allied armies to face.
The German Grenadiers boxed from Warlord Games set comes with enough plastic components to make 30 late war German Army miniatures. It includes a host of options to allow for different weapon configurations and command models.
If you're looking for advice on how to paint them, there's a great video available from Sonic Sledgehammer where he shows you how to quickly get a force ready using Citadel Contrast Paints.

For a look back at the history, here's an illustration and extract from Men-at-Arms 366: The German Army 1939-45 (5) by Nigel Thomas, with artwork by Stephen Andrew. 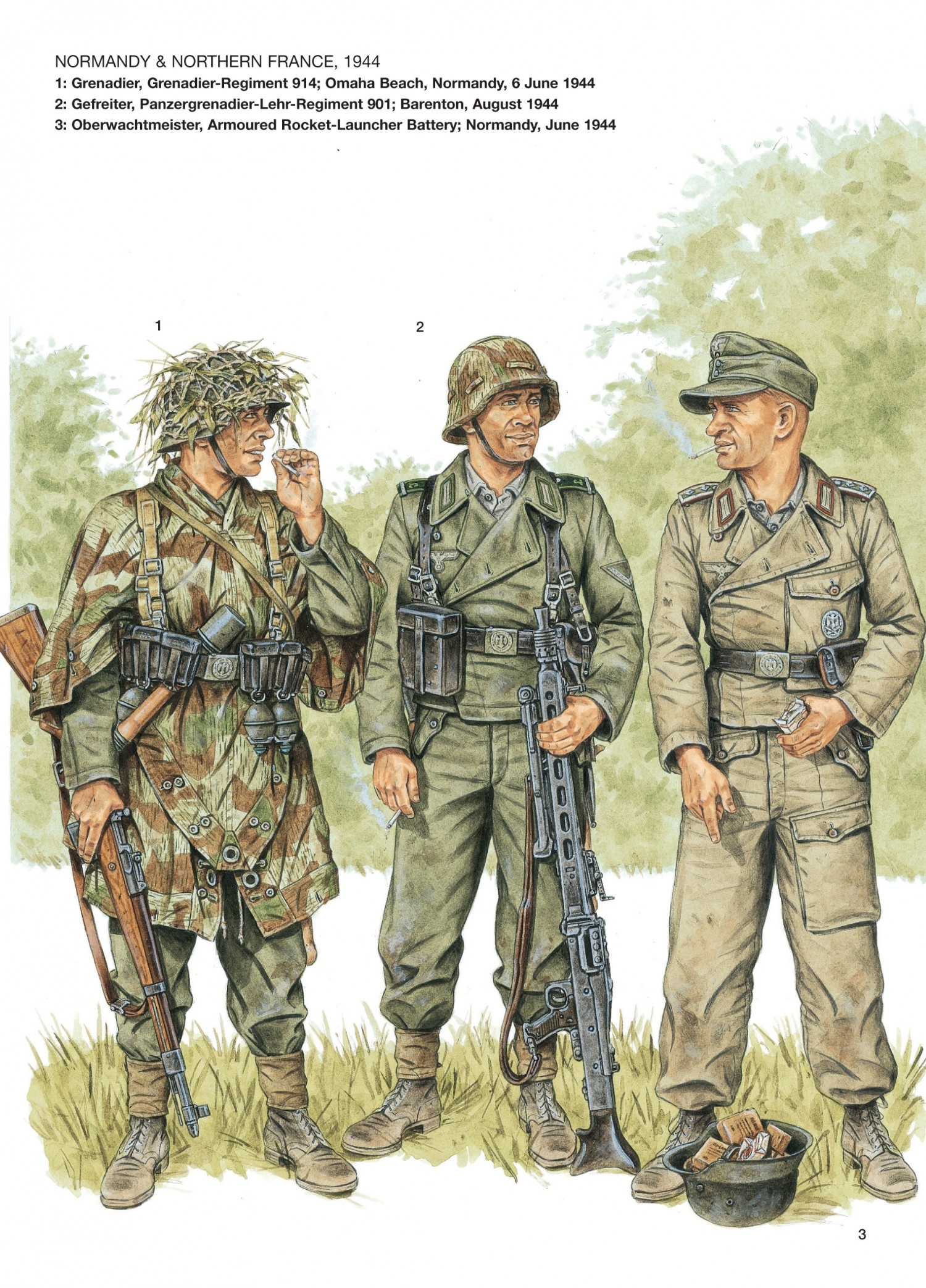 (1): Grenadier, Grenadier-Regiment 914; Omaha Beach, Normandy, 6 June 1944
This rifleman of the 352.Infanterie-Division opposing US landings on ‘Bloody Omaha’ is wearing the Zeltbahn 31 camouflage shelter-quarter with its darker side exposed, over his M1943 field tunic and trousers with M1941 field-grey canvas anklets and lace-up boots. His M1942 helmet has a regulation net and foliage. He wears the other ranks’ black belt with tropical M1940 canvas infantry support Y-straps, leather rifle ammunition pouches, and slung M1930 gas mask canister. He carries the rare Walther 7.92mm Gewehr 41(W) semi-automatic rifle, a M1924 stick grenade and two M1939 ‘egg’ grenades.
(2): Gefreiter, Panzergrenadier-Lehr-Regiment 901; Barenton, August 1944
This section first gunner is participating in the unsuccessful Operation Lüttich counterattack, 7-8 August 1944, when his regiment was destroyed. He wears the M1940 special field-grey uniform issued to all Panzer-Lehr-Division troops not entitled to the black Panzer uniform. The dark green M1935 shoulder straps have grass-green branch-colour piping and stitched Gothic L for Lehr, and an NCO candidate’s aluminium shoulder loops. The M1940 collar patches are also piped grass-green; rank is indicated by the M1940 left sleeve chevron. His M1942 helmet has the second pattern cover in M1931 splinter-pattern camouflage. He wears M1939 black leather infantry Y-straps, supporting on his belt an MG42 first gunner’s spares pouch and P38 Walther pistol in a soft-shell holster.
(3): Oberwachtmeister, Armoured Rocket-Launcher Battery; Normandy, June 1944
The personnel of independent armoured rocket-launcher batteries, equipped with 15cm Nebelwerfer 42 launchers mounted on half-tracks, were issued the M1940 special field-grey uniform. However, this senior NCO wears the M1942 Panzer working uniform in light grey herringbone twill with large left breast and thigh pockets. This was issued with the breast eagle attached; instead of the regulation M1942 sleeve rank insignia he has added M1935 shoulder straps and M1940 collar patches piped with artillery red (patches piped in regulation bordeaux-red were rare); note also his General Assault Badge. He wears a M1943 peaked field cap, a P38 Walther pistol in a soft-shell holster, and lace-up ankle boots; and carries ‘liberated’ war booty in his M1942 helmet - American cigarettes were particularly prized.
Will you be leading the German forces as they fend of the British and Candians? Preorder your copy of Bolt Action: Campaign: D-Day: British & Canadian Sectors today.