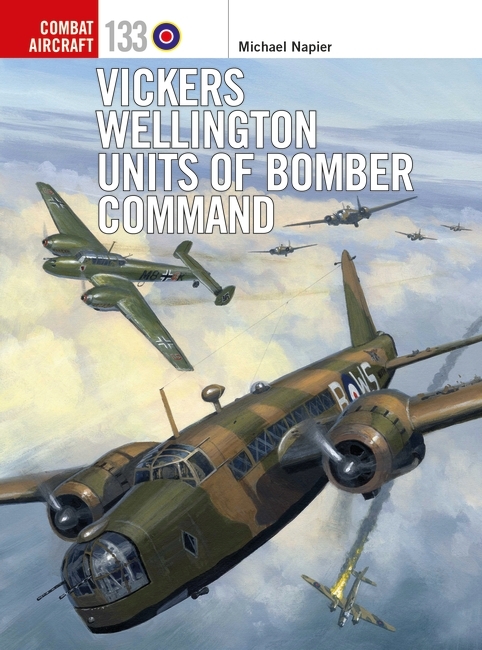 The Vickers Wellington is the great unsung hero of World War II. One of only two aircraft types that served in the front line of the RAF throughout World War II and remained in production throughout the conflict (the other was the Supermarine Spitfire), the Vickers Wellington was the mainstay of Bomber Command for the first three years of the war and became the workhorse of Coastal Command service, played a vital role during the Middle East and Mediterranean campaigns and also contributed greatly to operations in the Far East theatre. While everyone has heard of the Wellington, few realise its incredible versatility or the vitally important part that it played in RAF operations in all of the theatres of war. I could have written about the Wellington in any of its many theatres or roles, but I decided to concentrate on the Wellington units within Bomber Command. Why? Because the Wellington holds a unique and fascinating place in Bomber Command history.

After entering service with 99 Squadron in the autumn of 1938, the Wellington was involved in a number of interesting pre-war trials and exercises, which helped to prepare the aircraft and its crews for the coming war. When war came on 3 September 1939, Wellingtons took part in operational missions on that first day of the conflict (and, incidentally, on the very last day too, although by that time they were equipping the front line of Coastal Command). For the next eight months the Wellington squadrons took part in daylight bomber operations against the German fleet, including the disastrous Wilhelmshaven raid of 18 December 1939 when half the attacking force was shot down. Throughout these difficult days, the Wellington crews showed remarkable courage and tenacity, although they had little to show for their efforts. The Wellington remained in the forefront when Bomber Command switched to night operations in April 1940. At first the night raids were penny-packets of aircraft operating against a number of targets each night, but gradually the tactics matured into massed raids against a single target.

Meanwhile, the expansion of Bomber Command which had started before the war continued apace. Thanks to its rugged design and room for growth, the Wellington was chosen to equip the new squadrons, while the Hampdens and Whitleys were gradually relegated to other duties. At the outbreak of World War II, there were just seven Wellington squadrons in Bomber Command, plus another three training units, but the number Wellington units slowly increased until by the end of 1941 the Wellington equipped 22 front-line bomber squadrons. Between 1941 and 1942, it was primarily the Wellington that gave Britain and its allies the ability to take the offensive into Germany itself. Wellington crews attacked the German industrial heartland in the Ruhr Valley as well as oil production and storage facilities and the naval infrastructure. In particular, much of the effort of the Wellington crews was directed at German capital ships Scharnhorst, Gneisenau and Prinz Eugen while they lay in port in Brest during 1941 and early 1942. Interestingly, the Wellington always had an international flavour to its service: at the beginning of the war the aircraft and crews of the New Zealand Squadron were integrated into Bomber Command, and over the next few years the Wellington was also used to equip one Czechoslovakian, four Polish, three Australian and no less than 11 Canadian squadrons within Bomber Command. The only Victoria Cross won by a Wellington crew member was by New Zealander Sgt James Ward, who climbed out onto the wing of his aeroplane in mid-flight to extinguish an engine fire in July 1941.

The Wellington was gradually supplanted in the front line by the four-engined bombers, the Short Stirling, the Handley Page Halifax and the Avro Lancaster, but even so Wellingtons made up more than half of the entire bomber force that attacked Köln (Cologne) in the first Thousand Bomber Raid in the summer of 1942. The fact that over one-third of the Wellingtons which participated in that raid were provided by the Operational Training Units (OTUs) reflects the importance of the Wellington as an operational training aircraft. As Bomber Command continued to expand through late 1942 and early 1943, many new units, and in particular the Canadian squadrons of 6 Group, were formed with the Wellington as a stopgap until sufficient four-engined 'heavies' became available. The last bomber operation carried out by front-line Wellington squadrons was in October 1943, although the aircraft continued in front-line service as an aerial minelayer with 300 (Polish) Squadron until March 1944.

One of the most interesting facets of the Wellington in Bomber Command service was its use in OTUs. The Wellington was blessed with benign handling characteristics by the standards of the day and its rugged structure proved to be able to withstand considerable damage. These two attributes made the aircraft ideal as an operational training machine, so it became the aircraft of choice at the Bomber Command OTUs. But in terms of aircraft numbers alone, each OTU was a large unit - the equivalent strength of four operational squadrons - which meant that staffing, and to a certain extent equipping, the OTUs represented a huge drain of resources from the front line. It even meant that new airfields had to be constructed to accommodate these new units. The OTU system, therefore, represented a massive commitment in personnel, logistics and equipment - and the Wellington was central to its success. By late 1944 there were 22 bomber OTUs equipped with the Wellington and the aircraft continued to be used for training of bomber crews right until the end of the war, enabling the bomber offensive to reach its climax.

My book tells the history of the Wellington aircraft and the units that operated it during its service within RAF Bomber Command, from its conception as an Air Staff specification in 1931 through to its final operational sortie in the spring 1944 and beyond as the mainstay of the OTUs - and it is a fascinating story!