In today's blog post, M.C. Bishop joins us to discuss the spatha, the subject of his latest book. 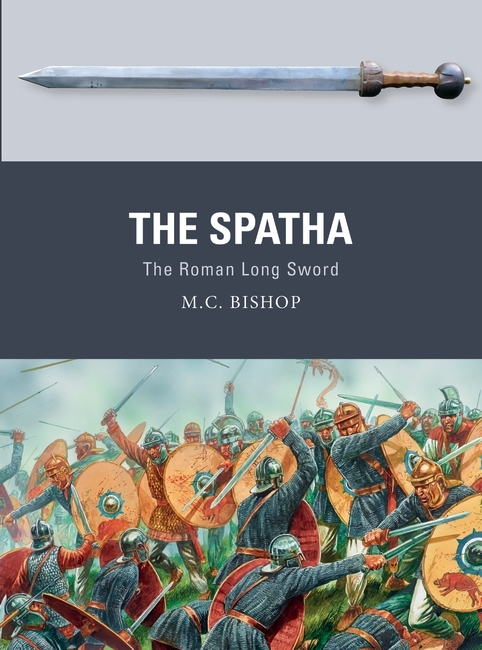 Ask somebody to name a Roman sword and the chances are they will choose the gladius, widely acknowledged as synonymous with the classic infantry short sword (although, as I am fond of reminding anybody who will listen, the word was just a general term for any type of sword). That is the legacy of the gladius, but it is arguably less significant than the longer spatha, which lasted longer and ranged wider than the short sword ever could. The original gladius Hispaniensis was actually longer than its successors (the Delos sword, for instance, had a blade length of 640 mm) and was used by both infantry and cavalry. Under Augustus (and possibly even earlier), however, the gladius was reduced in size, first with the Mainz type and then later with the Pompeii variant (blades mostly ranging between 450 mm and 520 mm), and it no longer had the reach of the earlier swords.

At the same time, auxiliary cavalry now serving with the Roman army brought with them the long-bladed swords that were a familiar part of Iron Age weaponry in north-west Europe. Ironically, these were the same swords Roman writers had scoffed at it as likely to bend after just one blow. Combined with the same manufacturing techniques employed on the short sword, however, these long cavalry swords became formidable weapons. Just as infantry wore the short sword on the right hip, so cavalry wore their longer blade on the same side, slung from a waist belt. 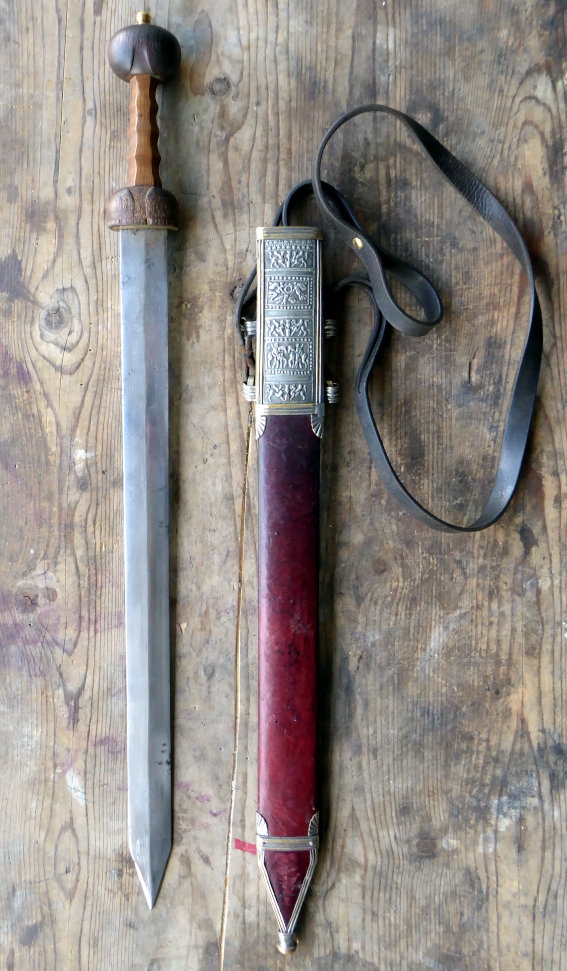 The short sword continued as the sidearm of choice for Roman infantry throughout the 1st century AD and well into the 2nd. Meanwhile, the longer cavalry sword had even acquired a nickname: spatha (from the Greek spathe meaning a spatula or wooden weaving implement). Then, around the middle of the 2nd century AD, something rather interesting happened. A series of innovations in Roman military equipment culminated in a switch to the longer sword for all troops, along with an equally radical change to the side on which the sword was worn (from right to left), with a completely new type of baldric being introduced from which the sword was suspended. Why this should have been the case is not clear. No Roman writer saw fit to refer to any technical innovation or military reform that might have led to this, but the suspicion has to be that it reflected an evolution in the way that Roman troops fought in comparison to earlier times.

It is important to stress that this was not just a change from short sword to longer blade, but rather a return to the original longer sword, employed by both cavalry and infantry. In effect, the use of two lengths of sword between the reigns of Augustus and Antoninus Pius was an aberration, an experiment that failed. This becomes all the clearer when the blade lengths of two spathae found in a burial at Canterbury (655 mm and 695 mm) are compared with the earlier Delos sword. This reversion to a longer infantry sword nevertheless was not the end of the short sword. Archaeological finds demonstrate that spathae were vulnerable to breaking in combat and in a number of instances such broken swords have been found which have been given a new point and repurposed as short swords. These may indeed be the semispathae mentioned by the Late Roman writer Vegetius. Indeed, recent analysis of a spatha from Vindolanda, near Hadrian’s Wall, shows evidence of repeated damage to the edges of the blade, a clean fracture across the whole sword, and an attempt to reforge the sword into something else (perhaps a dagger – Alberti, M. and Bishop, M. C. forthcoming: Three new swords from Vindolanda, Journal of Roman Military Equipment Studies 20). 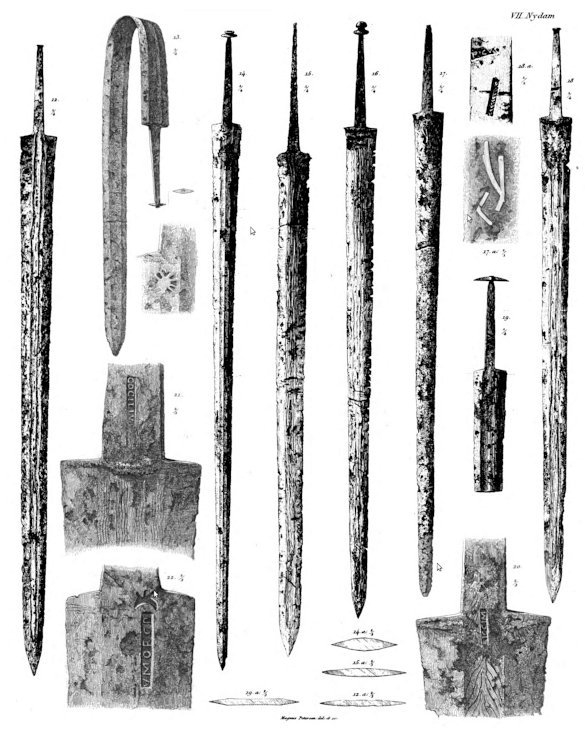 At the same time, an export trade in weaponry was thriving across Rome’s northern frontiers in the 2nd and 3rd centuries AD. An altar set up by Gentilius Victor, a former soldier, later working as a negotiator gladiarius, hints at the semi-official nature of this trade. He dedicated that altar to the Emperor Commodus and to Fortuna Redux, the goddess of safe returns after hazardous journeys, which surely speaks volumes about the risky nature of his chosen profession. The most immediately tangible manifestation in the archaeological record of the trade in swords is the considerable numbers of such weapons that come from watery deposits in what are now Denmark and northern Germany at sites like Thorsberg, Illerup-Ådal, and Nydam. Some of this may have been booty, but not all of it. Some of the swords were even modified with new, local forms of hand grip. This hints at another, perhaps unforeseen consequence of the trade. When the Roman historian Tacitus was writing about the Germanic peoples along the northern frontier at the end of the 1st/beginning of the 2nd centuries AD, he noted that they mostly preferred to fight with spears, not swords. The movement of high-quality blades across the border arguably fuelled a change towards sword fighting among these peoples and it is probably no accident that the swords of the Vandals, Goths, Saxons, and Vikings were all heavily influenced by the spatha (which was, of course, itself influenced by Iron Age European blades). Ultimately, the Roman armies would find themselves facing swords derived from their own weapons.

Finally, the legacy of the Roman long sword is a linguistic one: most of the Romance languages derived their words for sword (Italian spada; Spanish espada; French épée; Albanian shpatë) from the spatha, not the gladius.

The Spatha publishes today. Get your copy from the website here.