This post originally appeared on Phil's blog - Plastic Malpractice - where he posts all his latest creations. Head on over there to see what else he's been working on!

A distressingly long time ago (November 2017!), I built myself a Stalker for Eastern European post-apocalyptic action. He has seen little action, as it happens, but the recent release of Zona Alfa has given my interest in the genre a kick in the pants.

As before, I grabbed a load of Warlord Games WWII plastics and a bunch of their modern zombie-survivor special forces, and bashed the lot together! 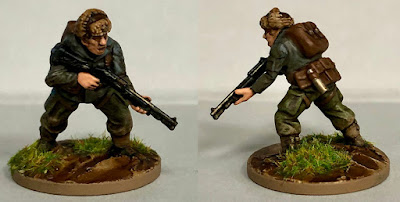 First up, a shotgun-toting scout. This chap has actually been sat on my desk since November 2017, as I built and started painting him immediately after finishing the first Stalker! The arms from the special forces sprue aren't as generic as the WWII ones, so only fit on certain special forces torsos (usually at a strange angle). This is the only figure I was able to put together that had a relatively natural pose! Still, I really like the hunched, cautiously advancing pose.

This guy is, hands-down, my favourite of the bunch. At first, I worried that it was a little too close to the pose of the original Stalker, but it ended up coming together perfectly. The balaclava head is from the special forces sprue, and didn't sit particularly well on the WWII body, so I went to the green stuff and added a fleece collar. This bulked out the shoulders a bit, and blended the head into the body, while also giving a bit of pop to a mini that might have come out a little dull otherwise (due to the grey balaclava). The AK has had the magazine clipped off, while the spare mag in the left hand was originally intended for an StG 44.

Another greatcoated guy, this one hauling some salvage, while attempting to keep his rifle at the ready. The head is actually from a Frostgrave sprue, and required the collar be carved open a little wider to fit. I reckon it works out with a decent parka-ish effect. This one got a similar paintjob to the original Stalker, though I tried to keep the weathering a little more prominent, as if from fresh splashes rather than worn-in dirt. I'm not sure how well it worked out - I quite like the effect, but it might be a bit too different from the original model. My favourite aspect of this model is the sawn-off shotgun on his backpack - I found a full-sized field shotgun on a zombie survivor sprue and sawed it down to suit! There's nothing holding it onto the backpack, which would normally be a peeve, but... rule of cool! 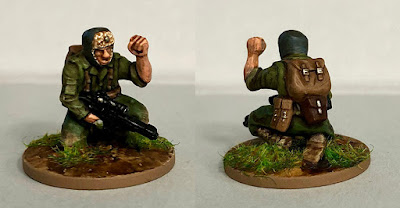 This last one is my least favourite of the bunch. It just didn't really come together the way I'd hoped. While I do like the pose, the single rolled-up sleeve is a little odd, and I really had a hard time painting the face on this one. Getting the thin fringe of fleece on the cheek-flaps of the hat was a personal victory! He'll be an expendable scout, I suspect.

All told, I've now got a viable Zona Alfa gang of five figures (viable in terms of numbers - I still need to stat it out properly), and a hankering to kitbash some more!

The obligatory group shot. The original Stalker is at centre.

If you want to give Zona Alfa: Salvage and Survival in the Exclusion Zone a try, order your copy today!