Last week, we headed up to Nottingham to meet up with Wargames Illustrated at North Star Military Figures HQ! On the blog today, you'll find a narrative battle report for the game of Oathmark: Battles of the Lost Age we played, with more articles about the game coming in the May issue of Wargames Illustrated (available April 2020). Be sure to keep an eye out for that one! The game was a pitched battle, with an Elf and Goblin coalition facing off against a small force of Humans and Dwarves. The armies came in at around 1300 points each, about half the total cost suggested for a standard game of Oathmark, but as you can see this still gave us plenty of units on the table to play with and was well suited for a small border clash between reconnaissance parties. The first turn saw the two armies advancing towards one another, steeling their resolves for the impending battle. A volley from the Goblin Archers saw the first casualty of the battle fall – a Dwarf Linebreaker had moved a little too far forwards. He would not be the last.

A fireball from the Dwarf Wizard was shrugged off by the Goblin Soldiers, and the two armies inched ever closer. The state of the board as we headed into the second turn.

As we headed into the second turn, it was clear that there were different strategies being employed by the two armies. The Dwarves and Humans were advancing in a steady line, while the Elves seemed content to let their Goblin allies charge ahead.

This meant that the Goblins would bear the brunt of any enemy charges, as well as ranged attacks, seeing as the Dwarf and Human archers would have to target the nearest unit in their Line of Sight. But would it also leave the Elves too far off to affect the battle? Only time would tell. 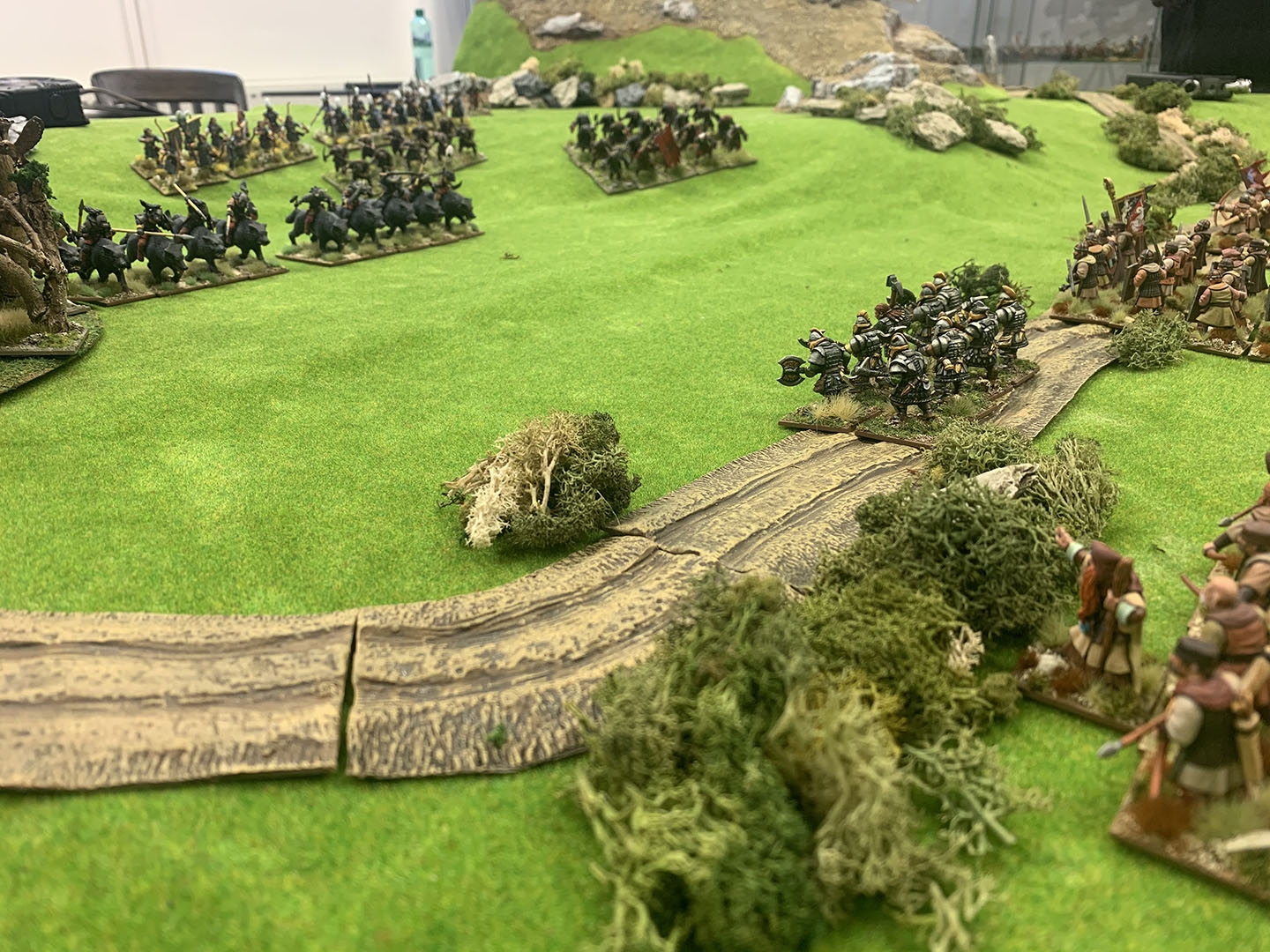 The view from the road as the Goblins and Elves poured down the hillside.

The armies once again started to move towards one another, sending volleys of arrows to thin their opponent’s ranks. This is crucial in Oathmark, as a unit’s combat effectiveness receives bonuses for each full rank they have after the first. 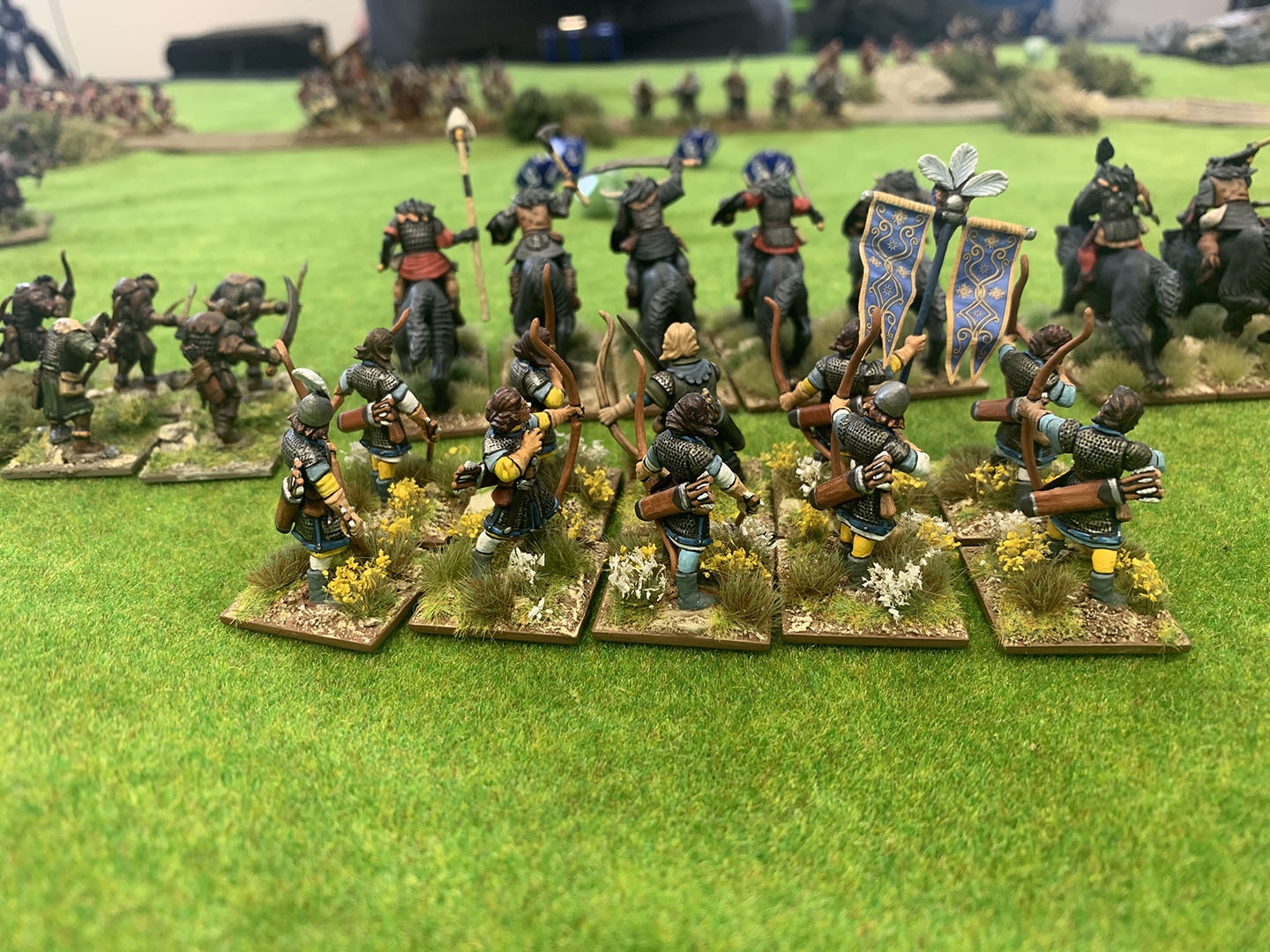 Elf Archers firing over their Goblin Allies using the Fire Over special rule. This allows you to fire over one friendly unit within 3 inches.

The Dwarf Linebreakers continued to provide a juicy target for the Goblin and Elf Archers, with both units firing at the heavily armoured Dwarves. The Elven volley proved especially deadly, in part because they were led by an Elf Champion with the Bow of Starsilver. This meant that for their ranged attack they replaced one of their D10s with a Champion Die, with hits from that one counting as double. The one dead Dwarf from the first turn was quickly joined by three of his comrades. 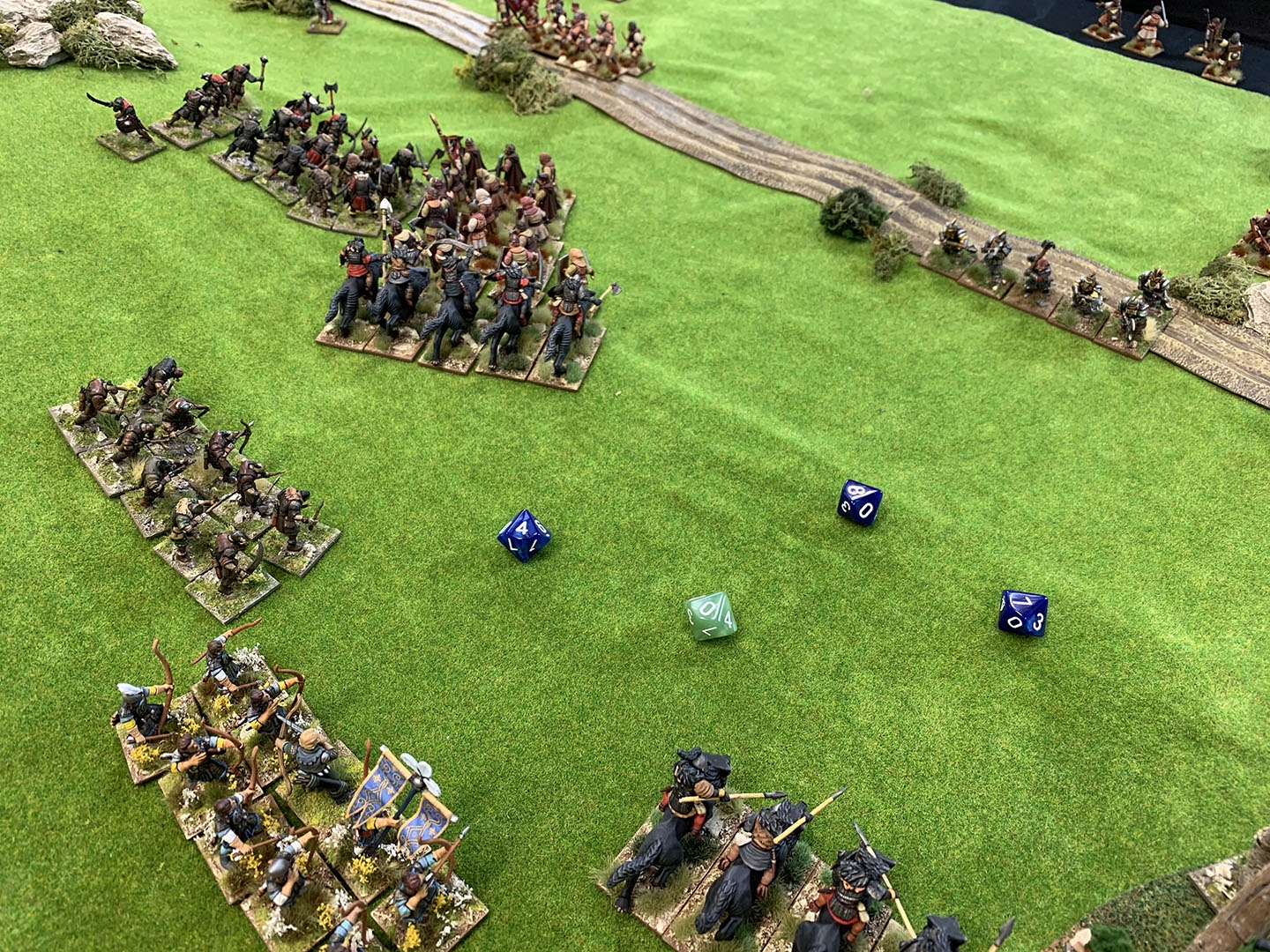 The Wolfriders charging into the Human Soldier's flank

While the Goblin and Elf Archers had been focusing on the Dwarf Linebreakers, the Human Archers and Dwarf Wizard had been whittling down the horde of 20 Goblin Soldiers marauding down the left flank with arrows and fireballs. A full unit of 20 Human Soldiers saw their opportunity to charge at this weakened foe, crashing into their flank but failing to break the beleaguered Goblin unit.

In their excitement, the Human Soldiers left their flank vulnerable to the Goblin Wolfriders. Confident that the Dwarf Linebreakers were too far away to be a threat, they charged in, killing five of the Humans and suffering no casualties themselves.

Whenever you are victorious in combat in Oathmark, you have three options. You can either push the enemy away by 1", push them back 6", or move back 1" yourself. The Goblin Wolf Riders gave the Humans an almighty shove to get them away from the Goblin Soldiers’ flank. The Goblin Wolf Riders gloating was short lived, as the unit of Dwarf Linebreakers, down to almost half their original figure count, got a helping hand. The unit was led by a Dwarf Princess, which meant that they could use the Command ability to activate themselves and another unit within 6". They took advantage of this to activate a nearby Human Wizard, who successfully cast Stolen March on the Dwarves, giving them a free movement action. This got them just in range to charge into combat, and the turn saw its third flank attack!

Only one Wolf Rider was killed – it certainly could have been a lot worse for them! 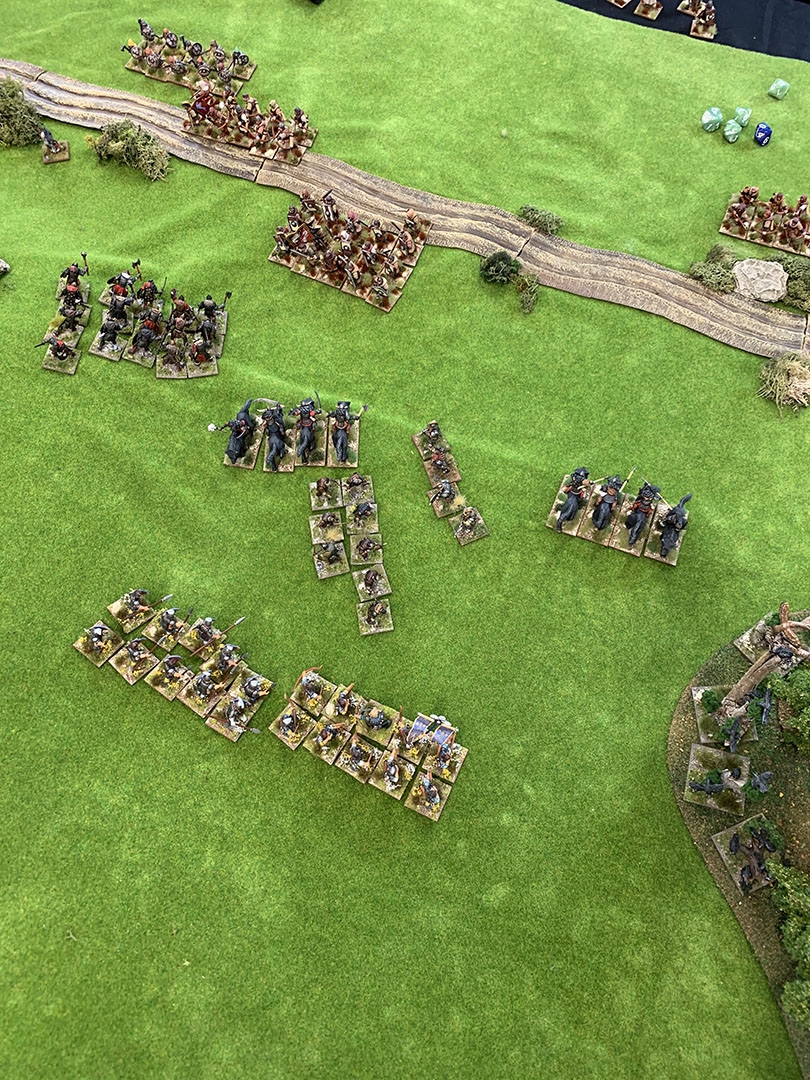 Above you can see the state of the table at the beginning of the third turn. The combined Dwarf and Human army has wheeled to attack the advancing Goblin forces, leaving some archers to offer supporting fire alongside the Wizard in the bottom corner. The Goblin and Elves are continuing to move forward in a fairly solid block, although the Elves who so wisely stayed behind their disposable allies are starting to fall a little too far behind to be particularly useful!

The Goblins had a glorious opportunity to charge into the flank of the Dwarf Linebreakers to make it a turn of four flank attacks, but they failed their crucial activation role. When units are activating, they will usually be rolling two dice (this can be modified up or down) and trying to score equal to or higher than their activation on one of the dice. For Goblins, their activation is 6, and at this important moment they failed and were only able to perform a simple action, advancing towards the Human archers by the road. 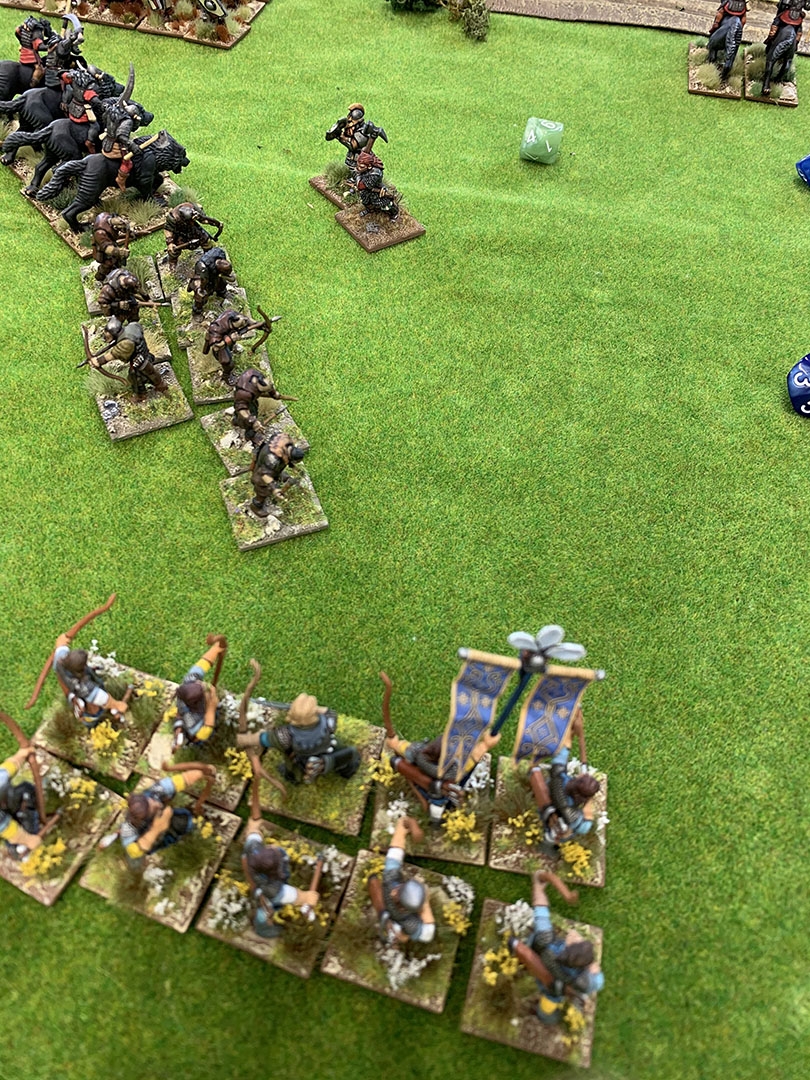 The Elves and Goblins seized the initiative, and with a wealth of targets available on the table, had to maked the decision of whether to charge in on the attack, or take the opportunity to rally some of their disordered troops. In the end, they made an…interesting choice.

Activating the Goblin Archers, they charged into melee combat with the enemy Dwarf Linebreakers. The aim was to sacrifice the Goblins to tie up the remaining Dwarves, as when a unit is engaged in melee combat they count as having already been activated, so may make no further action this turn. Surprisingly, the Goblins actually did well, killing two Linebreakers and suffering no casualties themselves. Only the Dwarf Princess and one of her unit remained, but they couldn’t do anything that turn. In response, a unit of Dwarf Soldiers came crashing into the flank of the ill-positioned Goblin Soldiers. Having started the game 20 figures strong, this unit was finally reduced to less than half strength, suffering three more casualties at the hands of the Dwarves while inflicting none in return. While their bodies were broken, their resolve remained strong, passing yet another morale check! 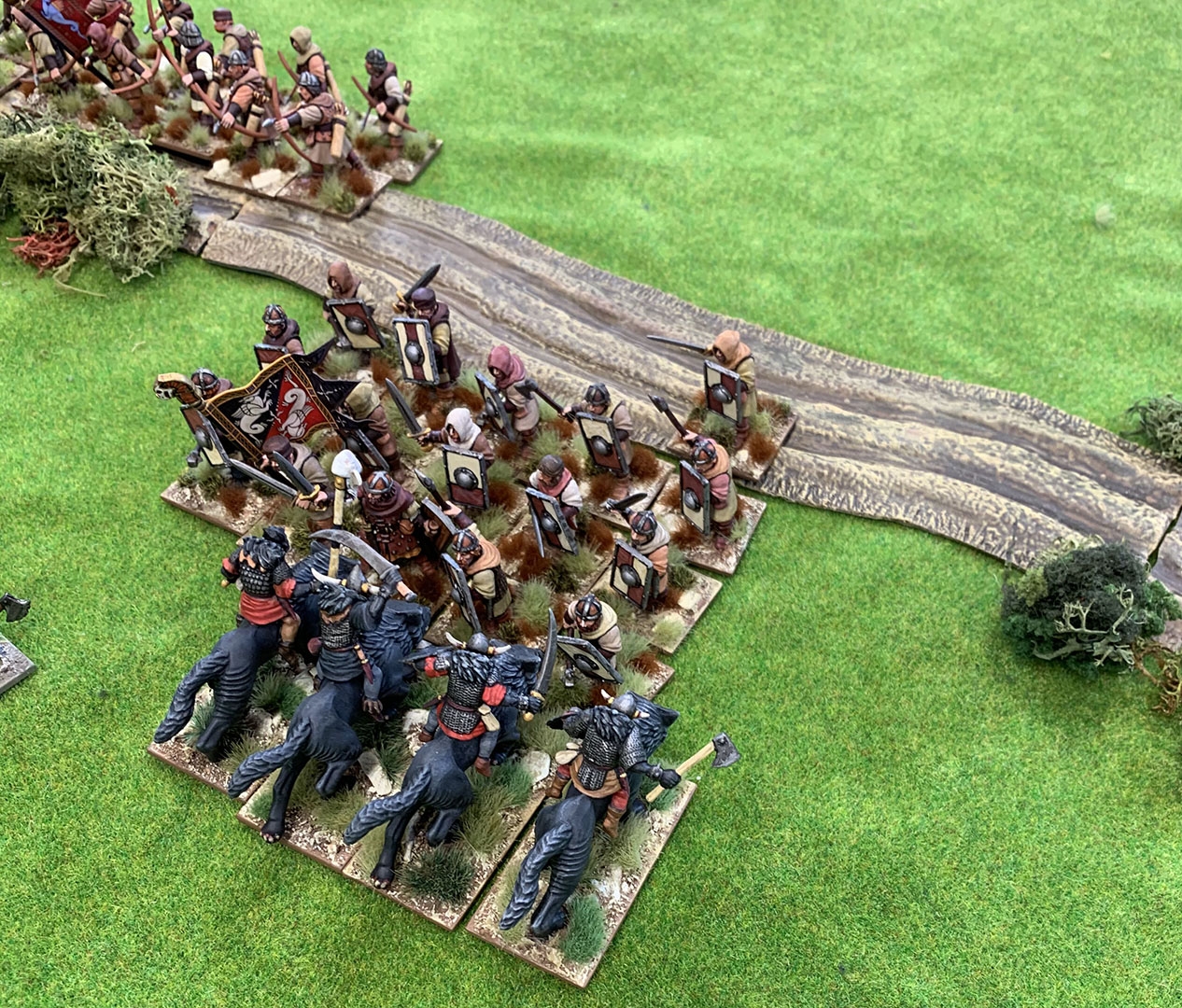 Later that turn, the Goblin Wolfriders charged into the Human Soldiers, wiping out 5 of them and suffering 1 casualty themselves. A victory, but it came at a cost, as both units ended the combat Disordered. One more failed morale check and they’d be gone! 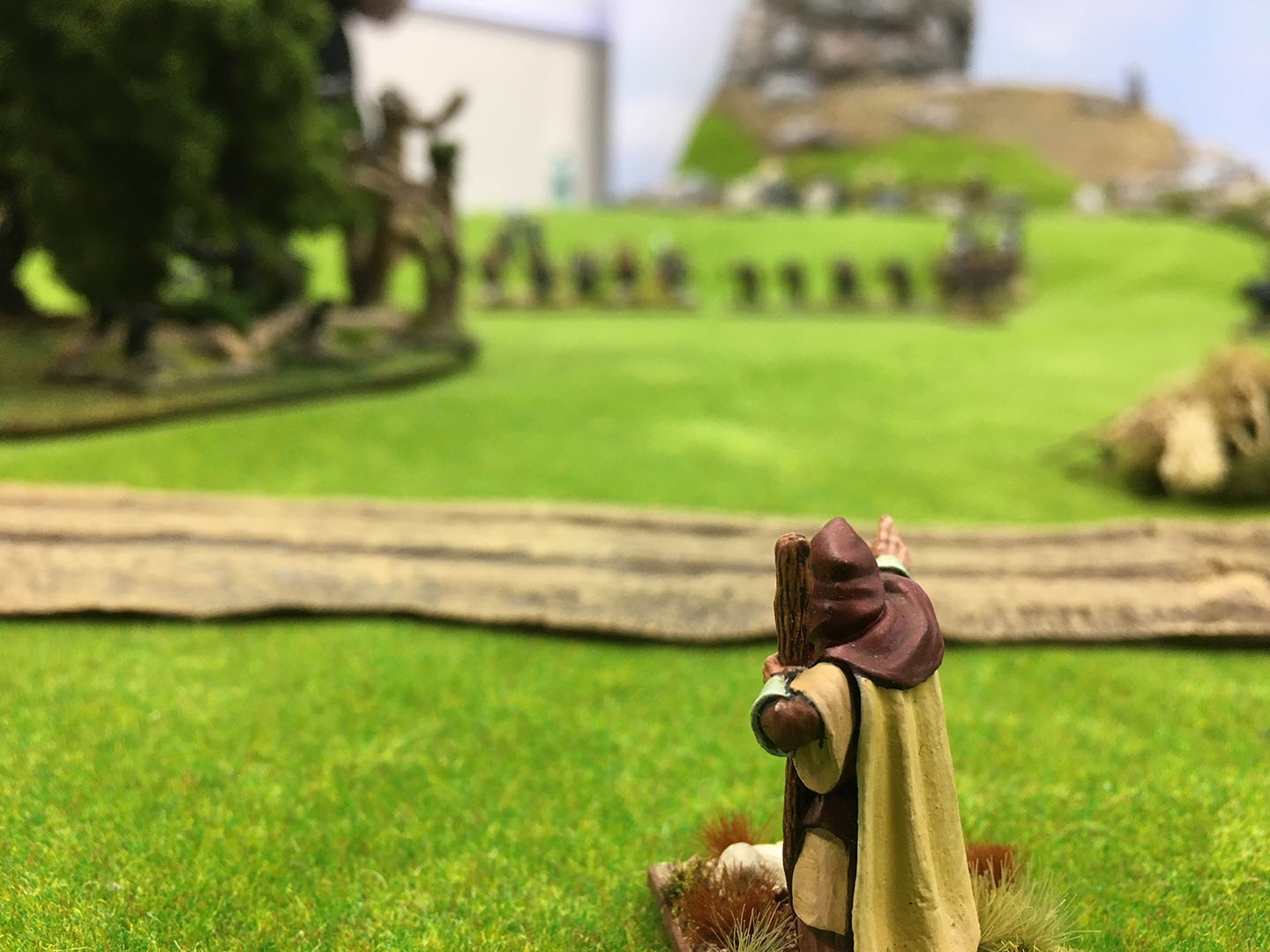 The turn seemed to be going in the Elf and Goblin army’s favour, but the Dwarves and Humans still had some tricks up their sleeves. Noticing that the Elf Archers hadn’t activated yet, the Human Wizard seized the opportunity and cast Sunblind, a spell that means a ranged unit can’t shoot the next time it activates. In the position they were in, that meant the Elves would be useless.

All that was left to do for each Army was position themselves for the next turn, and it would be a decisive one. 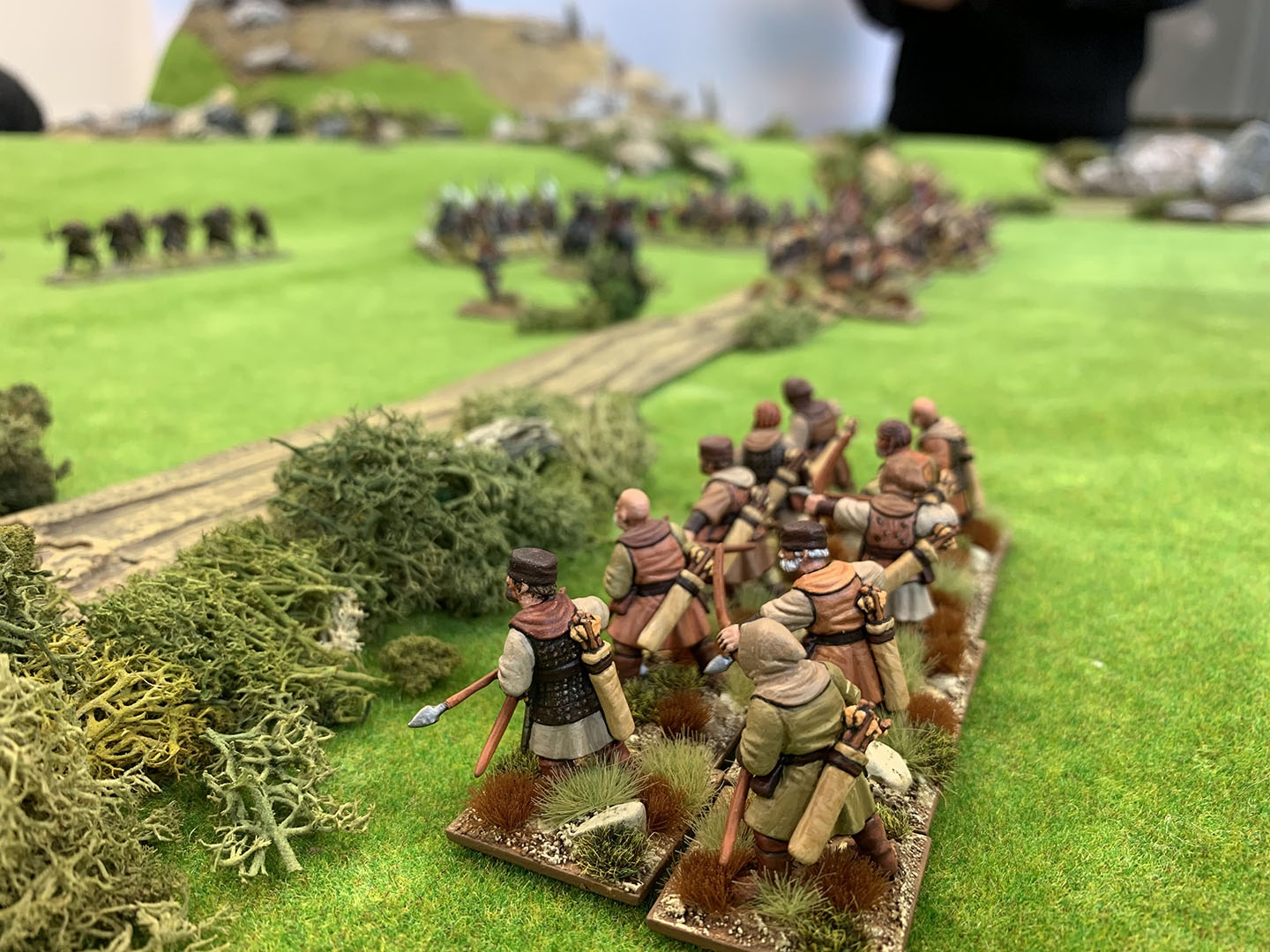 As the fourth turn began, the Goblin frontline was in a precarious position. The two units of Wolf Riders had taken heavy casualties and were both disordered. Seizing the initiative, a unit of Human Archers sent volley of arrows raining down on one of the units, inflicting another wound. It proved too much – the unit failed its Morale check and was routed from the table, resulting in Cascading Panic.

In Oathmark, when a unit breaks you have to take a Morale check for any friendly units within 8” to see whether they are affected by their fleeing comrades. The nearby Elf Spearmen and the unit of Goblin Soldiers passed with no problems, but the other unit of Goblin Wolf Riders failed. As they were already disordered, this meant that they too were removed from the battlefield. 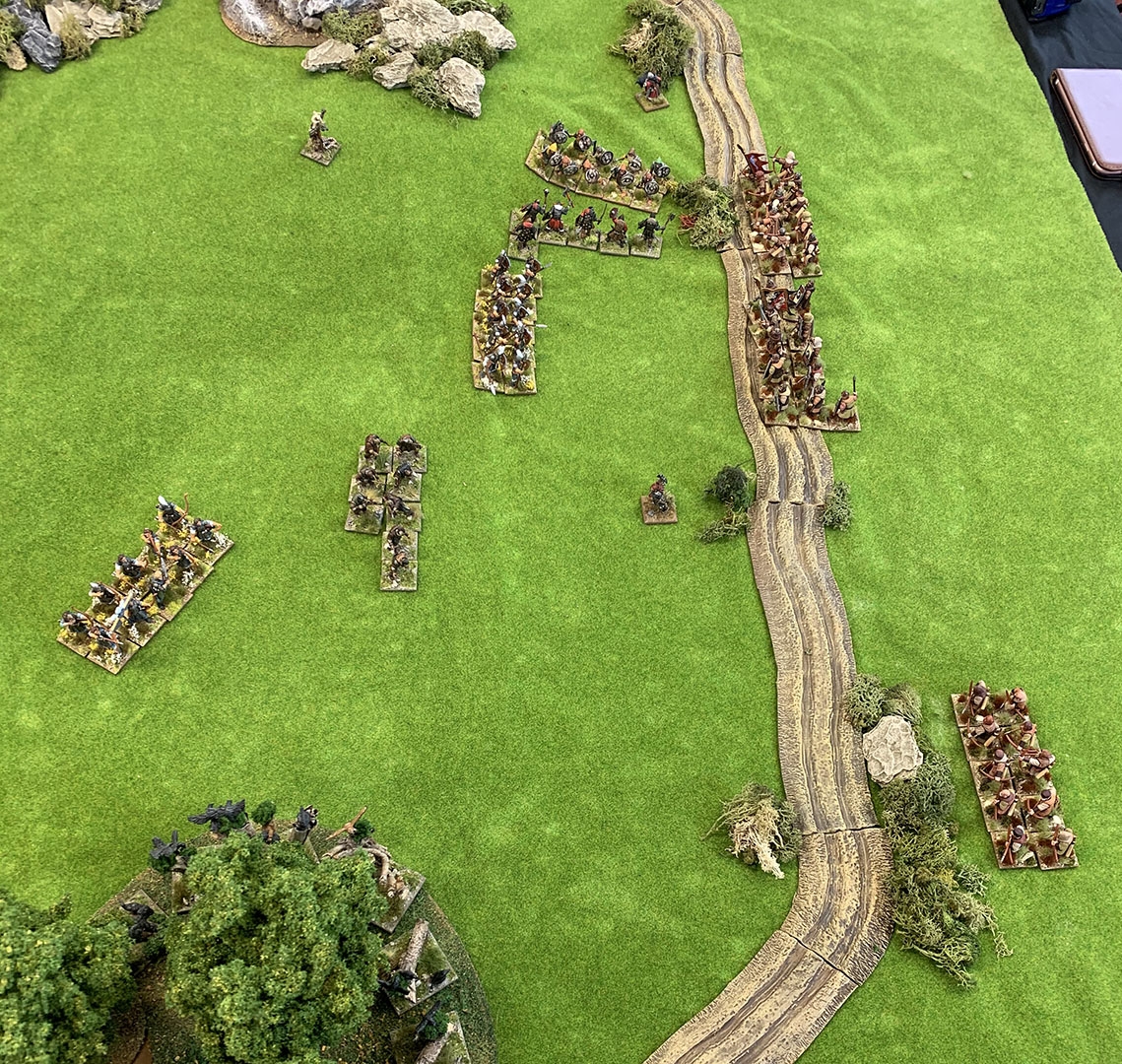 This had a huge effect on the momentum in the game, massively weakening the hammer blow the Goblins and Elves were hoping to dliver on the rHuman and Dwarf force's right flank. The Elf archers did manage to take out the Human Wizard that had blinded them the previous turn (more out of spite than anything) but it was clear they had lost the upper-hand that they seemed to have been enjoying for most of the game.

However, there was hope – a unit of 10 Elf Spearmen, shielded behind the Goblin front line for so much of the game, was ready to charge into battle. Having been held in reserve for so long, the hope was that the Elves could deliver a knockout blow, but they faced stiff opposition. The Human Soldiers matched their Rank bonus and had a Champion leading their unit, granting them the Champion Die. 5 Human Soldiers fell at the points of the Elvish spears, but 4 Elves were lost. To make matters worse, the Elves were left exposed to a charge from the rear from the Dwarf Princess, the one remaining figure from the unit of 10 Dwarf Linebreakers. In the space of a turn, the Elf Spearmen had their strength reduced from 10 figures to 3, were left disordered, and were sandwiched between two more powerful units. 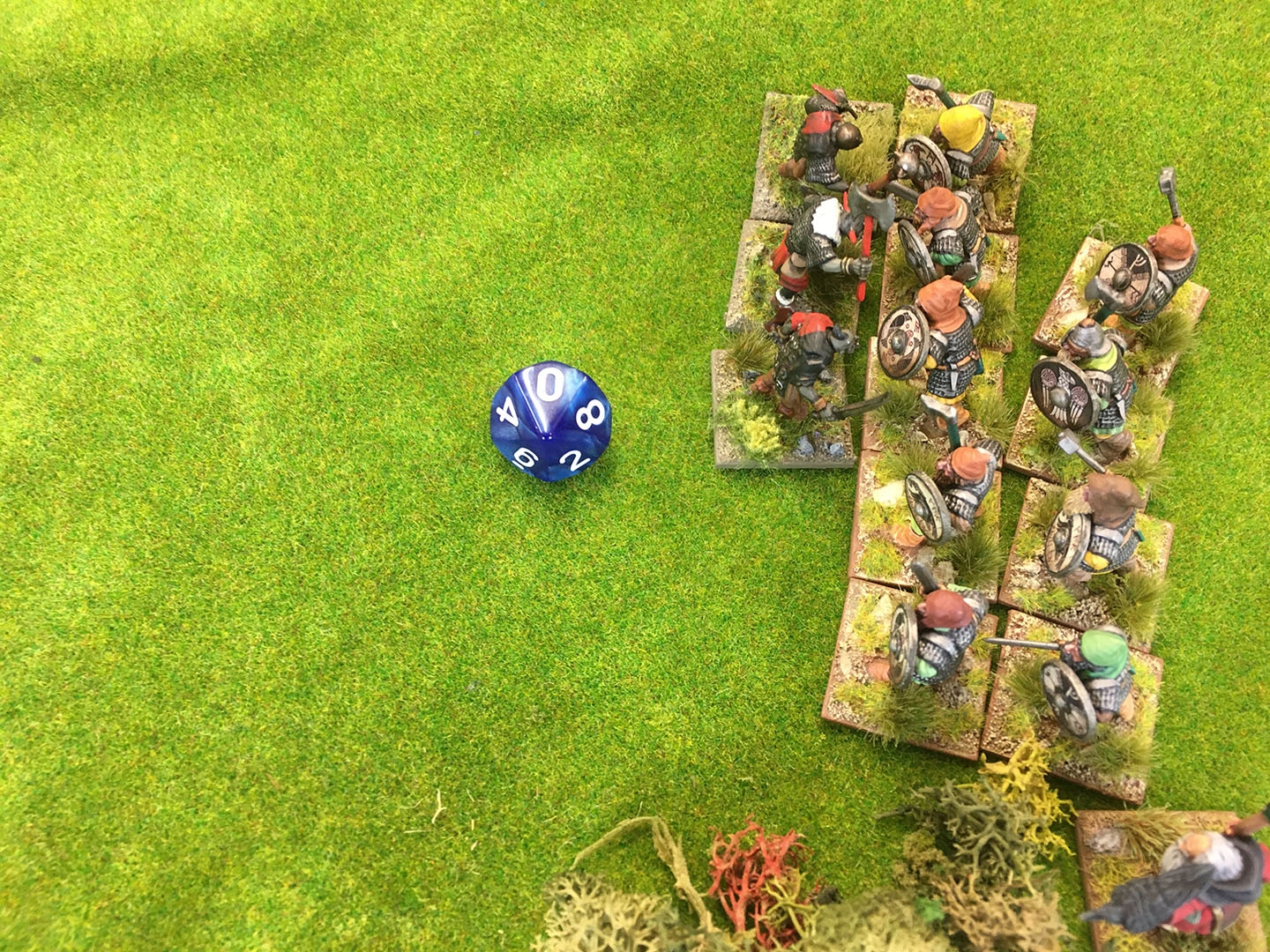 The rest of the Goblin and Elf army was doing no better – the Goblin Soldiers faced another charge from the Dwarf Soldiers, leaving their unit with just 3 figures remaining. A Morale check of 10 was needed, but yet again the Goblins passed; holding firm in the face of incredible odds. 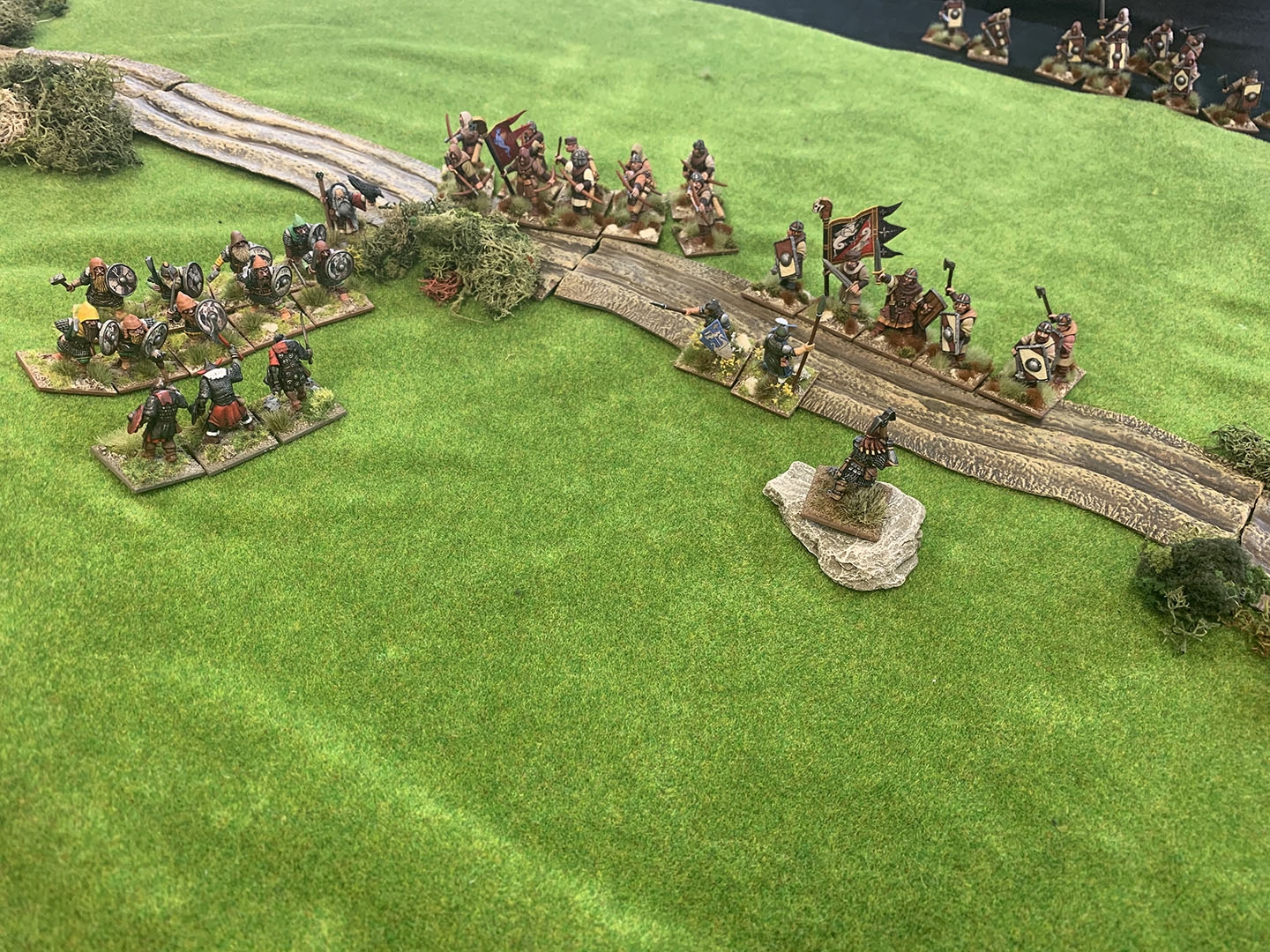 The Fifth turn began with the Human and Dwarf army rolling doubles for their initiative, which triggered a strange event! The optional rule for Strange and Catastrophic events can add a little narrative randomness to your game, and in this instance an Oathmark was discovered. The oathmark grants a bonus to morale checks for friendly units within 6”, and so it was fittingly placed beneath the brave Princess who had given so much to her army. 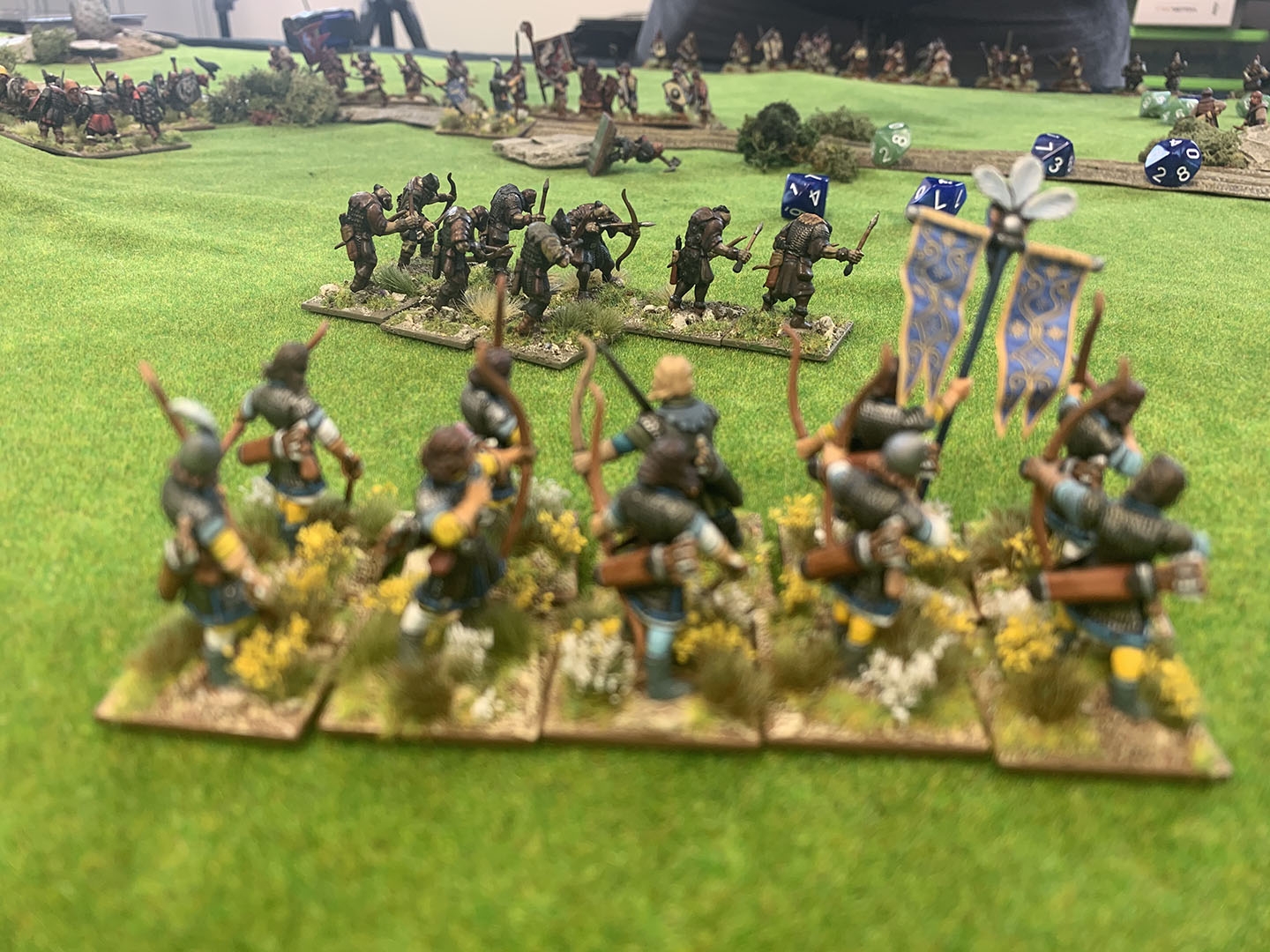 Unfortunately, the oathmark offered no bonuses against a volley from the Elven archers. The Dwarf Princess was finally defeated, which triggered morale checks for nearby Human and Dwarf units. Rather than falter upon the death of the Princess, her valiant sacrifice spurred them on, and they swiftly overwhelmed the few remaining Elf Spearmen and Goblin Soldiers. At this point the battle was called, the few remaining Goblin and Elf units beating a hasty retreat. Things had looked bleak for the Human and Dwarf army at the start, but they had broken the Goblin wave before it could crash into their ranks and had held their line despite heavy losses. The Princess would be mourned, but she would always be remembered by her oathmark.

We hope you've enjoyed this Battle Report, and can't wait to hear how you all get on when you start playing Oathmark: Battles of the Lost Age.