Joseph A. McCullough, author of Frostgrave and Oathmark: Battles of the Lost Age, is on the blog to talk about the upcoming second edition for his fantasy skirmish game. This blog was originally posted on his blog, which you can find here.
While the virus has delayed Frostgrave: Second Edition, it hasn’t stopped it. I can confirm that the book is currently ready for print and on-track for its new release date on August 20th! As that is now less than three months away, I figured it is time I started opening up about what’s coming in the new edition. So, consider this post the first of several over the coming weeks.
The first news comes right at the beginning of the book. The new edition has a foreword written by none-other than Shane Lacy Hensley – the man responsible for the Deadlands and Savage Worlds role-playing games! Shane’s writing and game design have been a big influence to me over the years. His efforts to make role-playing much more miniature friendly were a big factor in my own attempts to include a lot more role-playing elements into miniature wargaming.
Long before I wrote Frostgrave, I submitted a proposal for a little Savage Worlds adventure. Shane replied to me, encouraged me, and ultimately helped me polish up, what became Rise, Alabama! One of my first gaming publications. While Shane and I mostly fell out of touch after that, I continued to buy and read a lot of his works, and, as it turned out, he did the same, picking up Frostgrave…
I am seriously proud that he agreed to write the foreword. 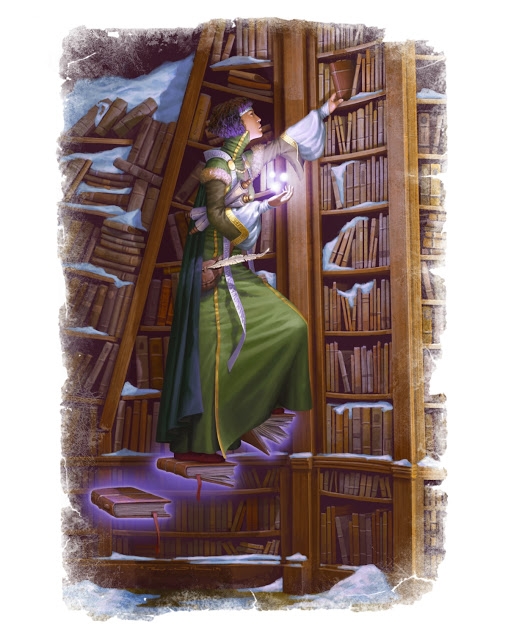 Now, one of the biggest changes to the new edition has already been revealed – the switch to aRu-Mor as the series artist, and I have shown off a new piece of her artwork above. Once again we have the Sigilist, who we’ve previously seen on the cover, in her more natural habitat – a library! Of course it is Frostgrave, so it is a frozen library, but there you go.
One of the things I really like about this piece is that it illustrates one of the new spells that the Sigilist school is getting in Second Edition. The spell is called ‘Bridge’ and it allows the spellcaster to create a bridge or staircase made out of a scroll (or in this case books). This utility spell should allow explorers easier access to high terrain and a way to potentially move from one high spot to another. Of course, the enemy may not want to set foot on a Sigilist’s bridge…
So, that’s all I’ve got for today, but I’ll be back soon to talk about creating Wizard and Warbands in Second Edition!
Excited to head into the Frozen City? Preorder Frostgrave: Second Edition today.