On the blog today, Peter E. Davies, author of the upcoming Combat Aircraft title F-102 Delta Dagger Units, looks at the design, development, and deployment of the aircraft. 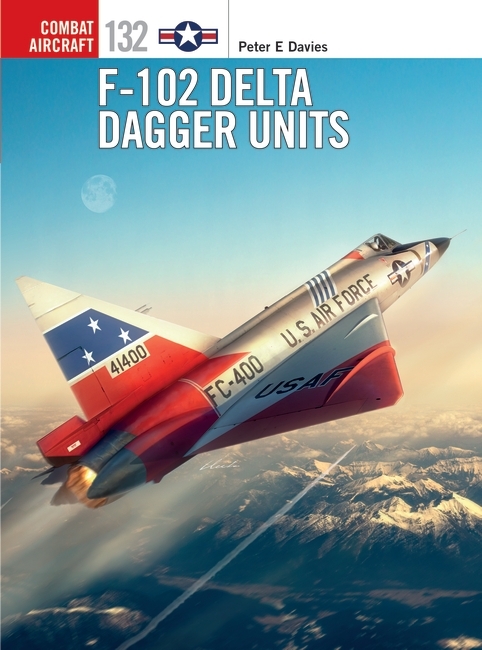 For many, the 1950s were the most exciting times in the development of military aviation. Each year seemed to bring forth several newer, faster, and more futuristic-looking fighters and bombers. The Century Series of US fighters, beginning with the North American F-100 and the highly innovative prototypes and proposals that preceded them were among the most impressive. With crackling afterburners, eye-watering speed, and radically new airframes they represented a quantum leap from the early jets of the 1940s. Of all these record-breaking technological triumphs of the Cold War era the Convair F-102 Delta Dagger was in many respects the most innovative.

While the F-100 was a supersonic development of the Korean War F-86, the F-102 was conceived around the relatively untried delta wing format. It also introduced advanced automatic radar-controlled interception systems for an internally carried set of guided missiles, to be launched under the control of the immensely complex SAGE ground-control radar network.

Increasing concern about the possibility of attacks on the US mainland by large formations of Soviet strategic nuclear bombers made the development of supersonic interceptors a national priority in the post-war years. Penetration by even one bomber would have meant a colossal disaster and during several Air Defense Command exercises Strategic Air Command bombers had managed to enter US airspace undetected. Subsonic fighters with guns and free-flight rockets were replaced by much faster types that could meet intruders at long range over the polar regions and fire radar-guided missiles from a considerable distance.

The F-102 was therefore envisaged as a major supersonic advance with a powerful afterburning engine (the revolutionary and widely used J57) and radar or infra-red guided missiles. The USAF’s 1954 Weapon System 201A requirement specified such an aircraft but also an entirely different method of designing, procuring, and building it together with all the manufacturing equipment and the maintenance kit that it would need during its service life. Instead of the traditional process of building and progressively testing a series of prototypes, the Cook-Craigie Plan aimed to make the first of the new type of aircraft to be built essentially the same as the last, even though the production run might total thousands. Through rigorous design and specification procedures, new aircraft could enter service far more quickly at a time of perceived national danger, together with all their support equipment down to the maintenance manuals and missile trucks. Any important revisions in the light of early service use could then be incorporated on the production line and also applied retroactively.

With today’s computer technology that concept might have worked, but there were still too many unknowns in the early 1950s when the Delta Dagger was being conceived. Normally, those areas were explored by test pilots in experimental prototypes, often at great risk to themselves. Although Convair skipped the usual “XF-102” prototype stage, it did fly a scaled-down jet, tailless delta inspired by the WW II German designs of Alexander Lippisch and parallel American work by Robert T. Jones and Michael Gluhareff. The XP-92A tested the delta wing and its new flying control systems where “flaperons” replaced the functions of ailerons and elevators. Although famous test pilot Scott Crossfield described it as “the worst-flying airplane built in modern times – a hopeless mess,” the little jet proved the delta format to be sufficient for work to proceed towards the F-102. Another test pilot, Pete Everest, coaxed it to Mach 1,01 in 1953, albeit in a steep dive.

Sadly, for the early YF-102s supersonic flight was an unobtainable goal. Although the first aircraft and embryonic versions of their complex MG-10 fire control systems were being assembled, the unknown aspects of supersonic flight caused a complete revision of the design. Early test flights in October 1953 revealed mediocre performance. Attempts to push the jet beyond Mach 1 resulted in severe instability. Also, it could only reach 48,000 ft, 8,500 ft short of its required operational altitude. For a while it seemed that cancellation was inevitable despite the emergence of the first pre-production aircraft and the $40.5m cost of their production tooling, two-thirds of which would eventually be scrapped.

Fortuitously, NACA wind-tunnel scientists, notably Richard T. Whitcomb, had calculated an “area rule” principle which required an aircraft to have a waisted (“Coke bottle”) fuselage cross section, to allow even airflow across it and prevent the creation of drag-inducing shockwaves at certain points along its profile and at its rear end. Four YF-102s were given a completely revised, longer fuselage with the required re-profiling and (eventually) a larger vertical tail. When the first example reached Mach 1.22 in level flight and 55,000 ft altitude by January 1955, the relief at Convair must have been tangible.

The revised aircraft entered USAF service in April 1956 and 702 single F-102A “Deuces” together with 150 slower, two-seat TF-102A “Tub” trainers were then on order. However, the final production revisions (including the larger fin) were not finalized until  April 2, 1957 and many earlier aircraft were suitably updated. Much of the continuing development focused on the MG-10, the armament and additions such as the novel infra-red target tracking system. From June 1956 the new fighters rapidly became the sharp edge of the USAF’s Air Defense Command (ADC), operating from the frozen expanses of Greenland to the front-line bases of USAFE and the Pacific Air Forces. The longest-serving unit, the 57th Fighter Interceptor Squadron (FIS) “Black Knights” flew its “Deuces” from Keflavik for 11 years, averaging 150 interceptions of Soviet aircraft annually. ADC squadrons stood alert during the Cuban Missile Crisis, the Berlin Wall confrontation and, from March 1962, in Vietnam.

Their little-known role as airbase defenders during the Vietnam War seldom provided chances to use their interception capability against Hanoi’s fighters, although MiGs were seen to turn away from South Vietnamese airspace when “Deuces” were detected. Washington considered that threat of intrusion by MiGs, Il-28 bombers or even Chinese aircraft to be realistic so the F-102 deterrent remained in place until 1970 at many US bases in South Vietnam. The fighter’s lack of in-flight refueling equipment and its supposed resemblance to the MiG-21 at a distance ruled out its use as an escort fighter during Operation Rolling Thunder, although its all-weather capability suited it to the vital role of pre-strike weather reconnaissance.

Escort missions for many other purposes were undertaken. During one of them, providing fighter cover for an EB-66 electronic warfare aircraft, an F-102A was jumped by a MiG-21 and shot down before it could engage the enemy. Like so many other advanced US types, F-102s were used for missions that their designers could never have envisaged. TF-102As flew escort and bomb-damage assessment sorties for B-52 Arc Light attacks and F-102As used their air-interception rockets to fire at ground targets, even training their infra-red Falcon missiles on suitable targets occasionally. SUU-11/A gunpods were tested on a Da Nang-based F-102A and aircraft of the 509th FIS flew 199 combat sorties in 45 days in which they destroyed 106 buildings, a bridge, and 16 sampans.

Meanwhile, the Delta Dagger’s principal user, the Air National Guard, had equipped 23 of its 32 interceptor squadrons with F-102s by 1961, deploying several abroad for international emergencies such as the Berlin crisis during 17 years of service in support of ADC units. Its transfer from ADC to the ANG was linked to a long-standing strategy in which the F-102 was seen from the outset as the basis of a more advanced “Ultimate Interceptor” (WS-201B). Initially conceived as the F-102B, this became the F-106 Delta Dart, retaining the “trademark” Convair delta wing and V-shaped canopy but offering a much more powerful engine and upgraded electronics. It was meant to replace the F-102 in ADC but delays, cost restrictions, and policy changes restricted its production to around a third of the F-102’s.

In its later years, ex-USAF F-102 were supplied to Greece and Turkey under the Military Aid Program. In the 1970s F-102s were also used for NASA training and testing. They also pioneered the use of retired fighters as full-scale targets for pilot training. Up to 1981, 215 stored “Deuces” were converted into target drones for piloted or unpiloted flight and most were expended over the Gulf of Mexico, struck down by live missiles. From 1986 they were replaced by surplus F-100 Super Sabres.

Comparatively little has previously been published about the F-102 and it was a pleasure for me to investigate this important aircraft, talk to some of the pilots who flew it at various stages of its history, and collect some of the spectacular photographs which either appear in the book or inspired Jim Laurier’s and Gareth Hector’s outstanding artwork.