Today on the blog, we're looking at some of the artwork from the last of our 2020 titles. Let us know what you think in the comments section. If there are any January 2021 publications you'd like to see the artwork from next month, be sure to mention them below!

DUE 107: British Battleship vs German Battleship by Angus Konstam
Artwork by Ian Palmer 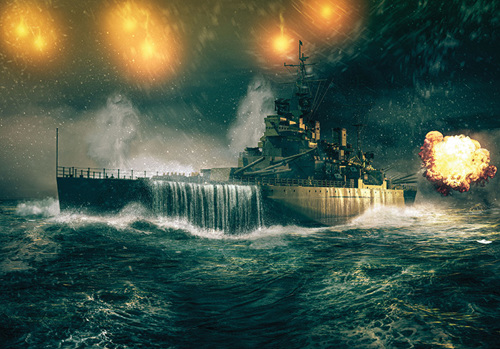 This first illustration, requested by Paul W, depicts HMS Duke of York at the Battle of North Cape on 26 December 1943. Having detected Scharnhorst by radar, Admiral Fraser’s flagship Duke of York closed the range. At 1647hrs, a starshell illuminated the target, and four minutes later, the British battleship fired her first salvo, at a range of just six miles. Scharnhorst was hit, and further shells struck the German battleship as she turned away. Scharnhorst began firing back, and her third salvo straddled the Duke of York, as their target was illuminated by starshells. The advantage, though, lay with the British, as thanks to the dark night, rough seas and poor visibility, the German gunners had problems ranging in on their target. By contrast, Duke of York’s gunners could rely on their fire control radar to accurately target their German opponent. After an uneven duel lasting some three hours, Scharnhorst was battered into submission, and then finished off with torpedoes. 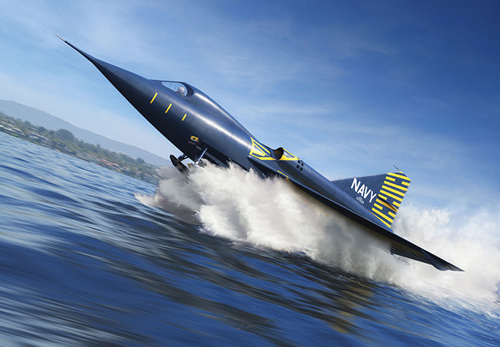 This specially commissioned artwork shows the remarkable Convair XF2Y-1 Sea Dart prototype BuNo 137634 during one of its take-off runs for another test flight. The seaplane fighter was a rare breed in every respect. Very few proposals for such types have been made during the jet age, and just two have been flown in prototype form – the British Saunders-Roe SR.A/1, which made its maiden flight in 1947, and the Sea Dart. The bulky SR.A/1 was firmly subsonic, but Convair’s design proved to be the only example of a water-based aircraft ever to exceed supersonic speed, which was achieved in a shallow dive on 3 August 1954. 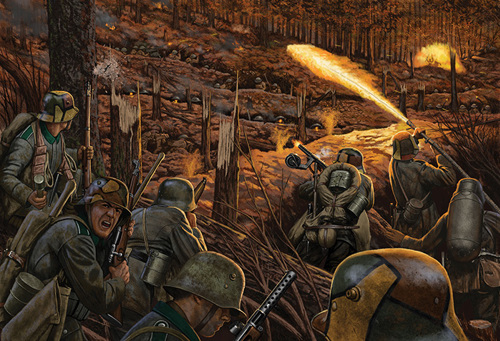 This last illustration shows the final German attack on the lost battalion just after 1700hrs on 7 October 1918. Just two of the Americans’ original nine Hotchkiss machine guns were still functional. After days without food and medicine, and with little water and sleep, surviving Americans were weak and in poor health. Nevertheless, according to multiple accounts, once the final German assault began, wounded men rose from their foxholes with their rifles, while those too injured to move loaded rifles for the rest. From behind the American pocket, and uphill, the Germans attacked with potato masher grenades. The 16 Strosstruppen attached that afternoon attacked the Americans’ left flank with a handful of flamethrowers. On the right flank, Captain Nelson Holderman and a sergeant repulsed a German attack almost single-handedly. The attack lasted at least an hour and a half and virtually exhausted the Americans’ last ammunition. Throughout the nearly week-long siege, both sides had engaged in shouted psychological warfare, as many of the besieging Germans spoke English, while many of the encircled Americans spoke German. As the attack failed, the surviving Americans began screaming taunts at the Germans. Minutes later, an American patrol broke through to Whittlesey’s pocket, ending the siege.